An easier solution to wealth inequality? 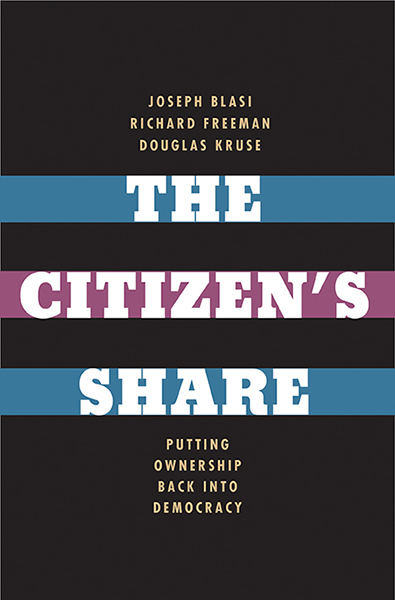 You’ve heard it before: America is becoming gradually more and more unequal. The top 5% of the nation’s earners control half of its wealth, and the top 20% bring in 86% of capital income, including interest and stock market gains.

What should be done about it? Plenty of economists would say nothing. But, if you believe the latest economic jeremiads, the eventual consequences of inaction could send society careening toward a horrifying form of new-age feudalism.

Thomas Piketty, the author of the best-selling inequality opus Capital in the Twenty-First Century, offered a highly publicized solution: worldwide income redistribution. In his book, Piketty espouses a stringent global wealth tax that would allow the government to manually smooth over the wealth gap. Politically, the plan is a non-starter.

Economic sociologist Joseph Blasi and co-authors think they have a third answer. Blasi, along with economists Richard Freeman and Douglas Kruse, wrote a book called The Citizen’s Share: Reducing Inequality in the 21st Century, published last year by Yale University Press and out in paperback this summer. In it, Blasi champions corporate profit-sharing, employee stock ownership, and stock option plans in which employees own chunks of the company or take part in earnings.

Why would this stamp out inequality? Blasi sat down with Fortune last week to lay out the plan. The idea is rooted, he says, in the Founding Fathers’ original vision of widespread land ownership. In the country’s early days, capital mostly consisted of land holdings, and there were a host of government programs dedicated to making owning it more accessible. George Washington, Thomas Jefferson, John Adams and James Madison all believed men should have their own farms, and thereby be self-sustaining citizens. Abraham Lincoln, too, supported the idea with the Homestead Act of 1862, which granted citizens 160 acres of government land to cultivate.

“Why isn’t our plan radical?” Blasi asks. “Because the founders of the American revolution had this view. That broad-based capital ownership was necessary for the republic to exist.”

When the founders were around, capital meant land. Today, it’s stock, real estate, and other investments. We’ve moved from an economy based on labor to one based on money. Wall Street has expanded exponentially even as manufacturing has floundered. The only way for the Average Joe to get in on the game, Blasi argues, is to give him a real stake in the outcome.

“We have to find a way for citizens to have some ownership of the technologies of the future,” Blasi says. As increasingly advanced robotics automate away more and more jobs, he sees two possible outcomes for the majority of working America: “We could have a future where technology creates a low feudal serf class—people with low wages or flat wages or high structural unemployment,” he says. “Or, we could have a future where we have a smaller workweek and citizens broadly have more capital ownership.”

Employee ownership and similar programs are not without problems. The criticisms are thus: Stock is risky, especially compared to cold, hard cash wages. Look at Enron, where workers’ were encouraged to buy company stock in their retirement accounts, and many fortunes were completely wiped out. Blasi wants to get around this by asking companies to create employee stock or ownership plans not tied to wages, as they are with 401ks, to hedge the employees’ exposure. Another worry: it could be hard to convince companies to make this change. While many U.S. businesses (the authors of this book say half of them) already give employees access to some type of ownership or profit sharing plan, for reasons both corporate and tax-related, it’s often limited to a few people and not much money. If expanding employee ownership were actually great for the bottom line, corporations would already be doing it.

To convince them, Blasi and his co-authors suggest large government tax incentives for corporate broad-based profit sharing, employee stock ownership, or stock option plans. (That’s in addition to the benefits to productivity and profit the authors argue already exist for companies going this route.) Before you say selective incentives and loopholes are exactly the kind of thing the country needs to purge from the books, consider the fact that we already have a form of this, which according to estimates from some think tanks, already cost taxpayers billions per year. The Internal Revenue Code Section 162(m) allows corporations to deduct an unlimited amount of compensation for a few top executives if the compensation is “performance-based”— this winds up being granted mostly in the form of stock options (which are technically performance-based because they’re tied to the fate of the company). Cue outrage at the public subsidization of sky-high executive pay.

But that system is not so dissimilar to the extension of employee stock ownership Blasi wants—it’s just more limited. All Blasi and company need is to get those executive privileges and perks extended to the rest of the 99%. That should be an easier sell than Piketty’s global wealth tax.