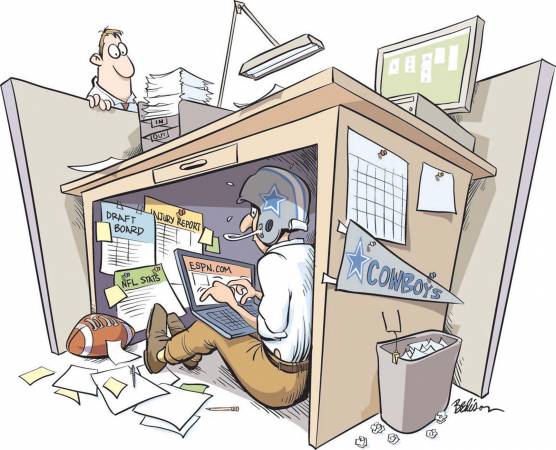 It became pretty clear that the World Cup ended up draining productivity in the U.S., but one study shows that the NFL’s fantasy football may also be costly for employers: to the tune of $13.4 billion a season.

Fantasy football uses real statistics from actual NFL players to create a points system that allows friends to compete against each another as pretend general managers of a fantasy football team. The firm Challenger, Gray & Christmas, which helps with company restructuring, downsizing and executive departures, attempted to do the math on how much time it costs to draft a team and keep up with individual stats.

The process was straightforward, according to the study: The firm estimated 18.3 million employees play fantasy football on the job for two hours each week and multiplied that by the Bureau of Labor Statistic’s $24.45 hourly wage average. The result: $895 million lost each week.

For a typical 15-week season, that’s $13.4 billion lost total. In other words, there are a lot of unproductive employees.

But a spokesman for the firm underscored to Fortune that the study isn’t meant to be scientific, but rather a “secondary part of the story.” Instead, it’s meant to “acknowledge the impact of fantasy football” and show how the pastime has “grown in popularity” in the U.S.

Challenger, Gray & Christmas’s CEO John A. Challenger doesn’t want to seem like a spoil sport. “We are not trying to demonize fantasy football. It is important to understand that there are more distractions than ever in today’s workplace,” he said in a statement.

He believes the figures mean little for the U.S. economy and GDP. “The $13.4 billion-figure, in fact, represents less than one percent of the $1.5 trillion in wages that will be paid out to workers on private-sector payrolls during that same 15-week period,” said Challenger (that figure hails from the Bureau of Labor Statistics).

But the study also suggests that the fantasy sport is a boon for businesses. “Companies that not only allow workers to enjoy fantasy football, but actually encourage it by organizing a company leagues are likely to see significant benefits in morale, which, in turn leads to an overall boost in productivity as well as employee retention,” said Challenger.

Whether the firm’s figures are right, or not, one thing is sure: the fantasy isn’t reserved for just the football. There’s some make-believe economics at hand here, too.