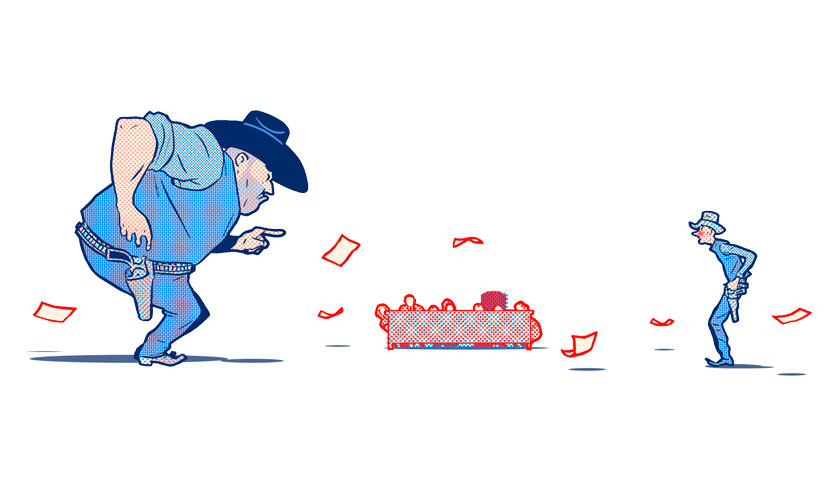 It’s a nice little town we got here, way out in the middle of the prairie. Maybe it’s not much, but we call it home. We got a school and two barbers, a pretty fair diner, and a livery stable out by the edge of town on the way to Boot Hill. I run the dry-goods store. Somewhere along the line, some folks decided I should be mayor. We do business. We raise our kids. It’s a quiet place, and that’s the way we like it.

It was last Thursday we heard the consolidators were coming to town. There had been rumors for a while they were on their way. And then one day there he was, one of their hands, having a drink at the Blue Lady at 10:00 one Monday morning, just kind of taking a look around and surveying things. I knew what he was up to. He was counting heads and looking for potential synergies.

You got to understand the way they work. First there’s one, taking stock of things. Then there’s two or three more. Before you know it, here comes the big consolidator himself surrounded by plenty of gunmen. He puts it to you, the way they want things to go so that nobody will get hurt. And if you know what’s good for you, by sundown you’re consolidated. Which sounds fine until they close all the businesses in town and bring in their own operations. Then they start killing any of the locals who get in their way. Before you can say “Jack Rabbit,” what used to be your town, your home—well, the signage may be there, but for all intents and purposes it’s gone, and in its place is another consolidated town.

First off, I got on my horse and went to Bob. He’s been the federal marshal around here since anybody can remember. He was in a hurry, throwing his belongings in a big leather satchel. “Bob,” I said, “we got consolidators on the way. What you plan to do about it?”

“Ain’t nothing I can do about it, Mayor,” he replied. He kept packing. He looked scared. “Ain’t no law against consolidators,” he added, kind of trembly.

I went out to the middle of Main Street. Nobody was in sight. Strange. Then I heard the singing, and I headed out to the church. There they were, all my friends and neighbors, huddled together. Prescott, the banker, was addressing them. “We can’t fight these guys!” he yelled. “We got families and investments!” There was some hubbub then, and when I looked in their eyes, all I saw was fear. I left and went down to the newspaper office. Nobody home there either. GONE AGGREGATIN’ said a sign on the door. At the corner of First and Market, they were having a party, about a hundred guys in fancy suits. WELCOME, CONSOLIDATORS! said a banner above them.

I stood out in the middle of Main, listening to the wind and waiting. They got there soon enough, a whole army pulling up in a cloud of dust, and in the middle was the big dude on the tall black horse. He had a face like Death itself, but his voice was soft and kind. “This don’t have to go bad,” he said, slowly coming down off the beast and standing about 10 paces in front of me. “Get out of town,” I replied. I tasted gunmetal and blood in the back of my throat.

There was a silence then, the longest of my life. I could see his trigger finger twitching. Then he spoke. “Okay,” he said. “There’s more than one way to skin a cat.” Then he got up on his high horse again. “This is a nice town,” he said. “Yep. A real nice town.” Then they rode off. And the sound of their hooves was like thunder receding in the night.

The town came out then, circled me, patted me on the back, bought me drinks. And that was fine. But I’m not kidding myself. We have a lot of work to do, and we’d better get to it pretty damn quick. It won’t be too long before they’re back. And history is a mighty tough steer to ride.