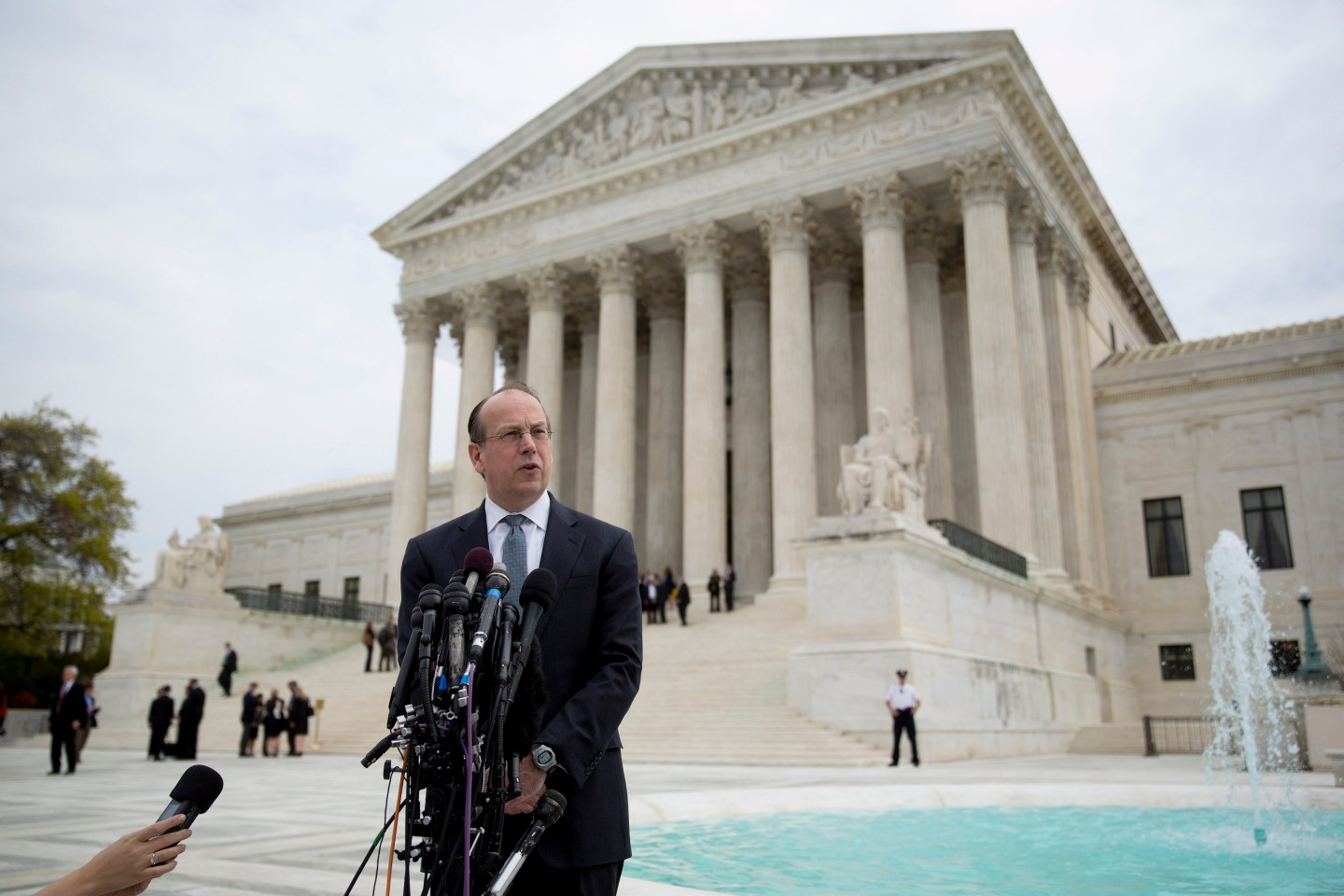 When Seattle’s $15 per hour minimum wage became law in early June, Mayor Ed Murray received praise for brokering discussions between labor and business that gave the city the nation’s highest pay without an all-out fight. But implementing the law as it currently stands won’t be easy, especially considering the attorney who’s now challenging it.

Shortly after Murray signed the ordinance into law, lawyer Paul Clement sued the city of Seattle on behalf of the International Franchise Association, which claimed that the $15 per hour law will irreparably harm franchisees and put them at a competitive disadvantage. The lawsuit, which was filed in Seattle federal court, takes aim at the provision of the minimum wage law that treats hotel and fast food franchises differently than other small, local businesses simply because they’re associated with big corporations. As it stands now, franchisees must adopt the $15 minimum wage within three years—the same time frame required of large employers. Other small businesses, meanwhile, have seven years to reach the $15 per hour threshold.

In a motion for preliminary injunction that Clement filed earlier this month, he argues that the ordinance violates the interstate commerce clause of the Constitution and the equal protection clause of the Fourteenth Amendment. Its “discriminatory” nature, the filing says, “crosses the constitutional line.”

Those are potent claims that carry even more weight considering it’s Clement who lodged them. In an era of high stakes Supreme Court showdowns that have pitted conservative values against liberal beliefs, the Washington, D.C. attorney has served as the right wing’s ace, its heavy hitter, its constitutional wunderkind.

Forty-eight-year-old Clement has argued 74 cases before the nation’s highest court, including two of the most prominent cases from the most recent term. He represented craft store chain Hobby Lobby in its battle against the Affordable Care Act’s contraception coverage mandate and advised television broadcasters in their fight against streaming startup Aereo, notching wins in both. In 2012, he argued against the government in its challenge to Arizona’s controversial immigration law and represented the 26 states that tried to overturn the centerpiece of the health care law. He lost those two cases, as well as a 2013 case in which he argued on behalf of proponents of the Defense of Marriage Act.

The case against Seattle isn’t blatantly partisan, but the constitutional questions it raises were ripe enough to entice Clement, who once served as President George W. Bush’s solicitor general. Clement talked with Fortune on Wednesday about the case, its merits, and why he decided to take it on. The following is an edited transcript of the conversation.

Fortune: From your perspective, what’s at stake in the Seattle minimum wage case?

Paul Clement: Seattle’s minimum wage law is unusual because it sets up differential treatment of small businesses and large businesses. It takes a small business with only a dozen employees that happens to be an Arby’s or McDonald’s and treats it as if it is a de facto large business and requires it to phase in [the $15 minimum wage] on the accelerated timetable that Seattle, in its wisdom, deemed feasible for a company like Boeing, but not for other small businesses. That’s problematic because it discriminates against franchises because of their connection to interstate commerce and their affiliation with federal trademarks.

And your lawsuit says the Seattle law violates franchises’ First Amendment rights. Can you explain that?

Just to be clear, your client is not against paying employees $15 per hour, it’s just opposed to the way in which the pay hike will be implemented?

Yes. The most important thing to understand is that, although Seattle is in the headlines because this law gives them the highest minimum age in the land, the legal challenge is not over the simple fact that they raised the minimum wage above the national standard; the lawsuit really focuses in on the discriminatory treatment of franchise businesses.

Critics of your lawsuit say that it’s a front for giant fast food corporations’ opposition to higher worker pay. How do you respond to that?

I think that that points to the issue that’s at the heart of this case: corporate separateness. When you walk into a McDonald’s or Days Inn or coffee shop that has a dozen outlets, you’re not walking into corporate headquarters. These franchised companies are organized differently from a company that’s one monolithic company with one set of management and one set of employees.

The franchise structure that you’re talking about recently took a hit when the National Labor Relations Board general counsel determined that McDonald’s was a joint employer of workers at its franchise restaurants. Does that decision affect your case against Seattle?

No, I don’t think it changes anything, though it does show that there’s a coordinated campaign to go after the franchise model. I’m not suggesting that my clients think that the NLRB decision is correct, but there at least you have a general standard that the NLBR says applies in certain situations for when you lump employers together. The Seattle approach doesn’t even apply a general test; they’re just applying a categorical rule that franchises get lumped together.

That “coordinated campaign” against franchises that you mention—what forces are behind that and why is it happening now?

There’s a coordinated effort out there by unions to try to go after the franchise model. I don’t have any particularly great insights into why now and what their motivation is other than they see it as an opportunity. When any given law is passed, there are often allusions made to the “powers” behind it, but with Seattle’s minimum wage law, the wolf comes as a wolf. There’s no question where the motivation for this ordinance has come from. To make matters as clear as possible, the Service Employees International Union has actually filed a motion to intervene in the lawsuit to defend the constitutionality of the ordinance. They’ve taken ownership of the law to the point where they take the position, “we want to intervene here to defend our handiwork.”

Your lawsuit references private emails and public statements by elected officials that you claim illustrate an effort to use the minimum wage law to break the franchise model. In one instance, a member of the city council says that “to be a franchisee, you have to be very, very wealthy. Just a small business person of color from Rainier Beach is not going to be able to afford to open a franchise outlet.” How do you respond to that criticism?

Those claims aren’t going to be directly relevant to our lawsuit, but I think my clients would love the opportunity to put on that case because, in reality, the facts are just the opposite. The franchise model lowers the cost of forming a new business. Sure, you’re going to have to pay some franchise fees, but in exchange you don’t have to start from ground zero in terms of establishing familiarity with the brand.

There are many other states and cities considering minimum wage hikes and many that have already implemented them. Does this lawsuit have ramifications beyond the city of Seattle?

For other jurisdictions looking to increase the minimum age in a non-discriminatory way, this lawsuit won’t have any impact. But for jurisdictions—and I think Chicago is one—that are using Seattle’s legislation as a model for their own, that want to borrow not only the $15 wage but the discriminatory provisions as well, then this lawsuit would have direct implications for them.

Why did you decide to take this case?

My firm had been doing some consulting work for IFA, so when Seattle’s ordinance was passed, it was natural to think about getting involved. The constitutional issues here are very interesting. The way in which Seattle used federal trademarks and the like as the marks of unfavorable treatment, for me, raises a host of constitutional issues, so it’s a great case to get involved in.

The outcomes of some of your past cases have had big social ramifications. Is that true for this case too?

I don’t think so. I sort of view this in a different category. There’s obviously lots of latitude for states and local governments to engage in economic legislation, but there also are some lines that you can’t cross. When you start discriminating against people based on their connections to interstate commerce or their use of intellectual property rights—those are things that start to cross the constitutional line.