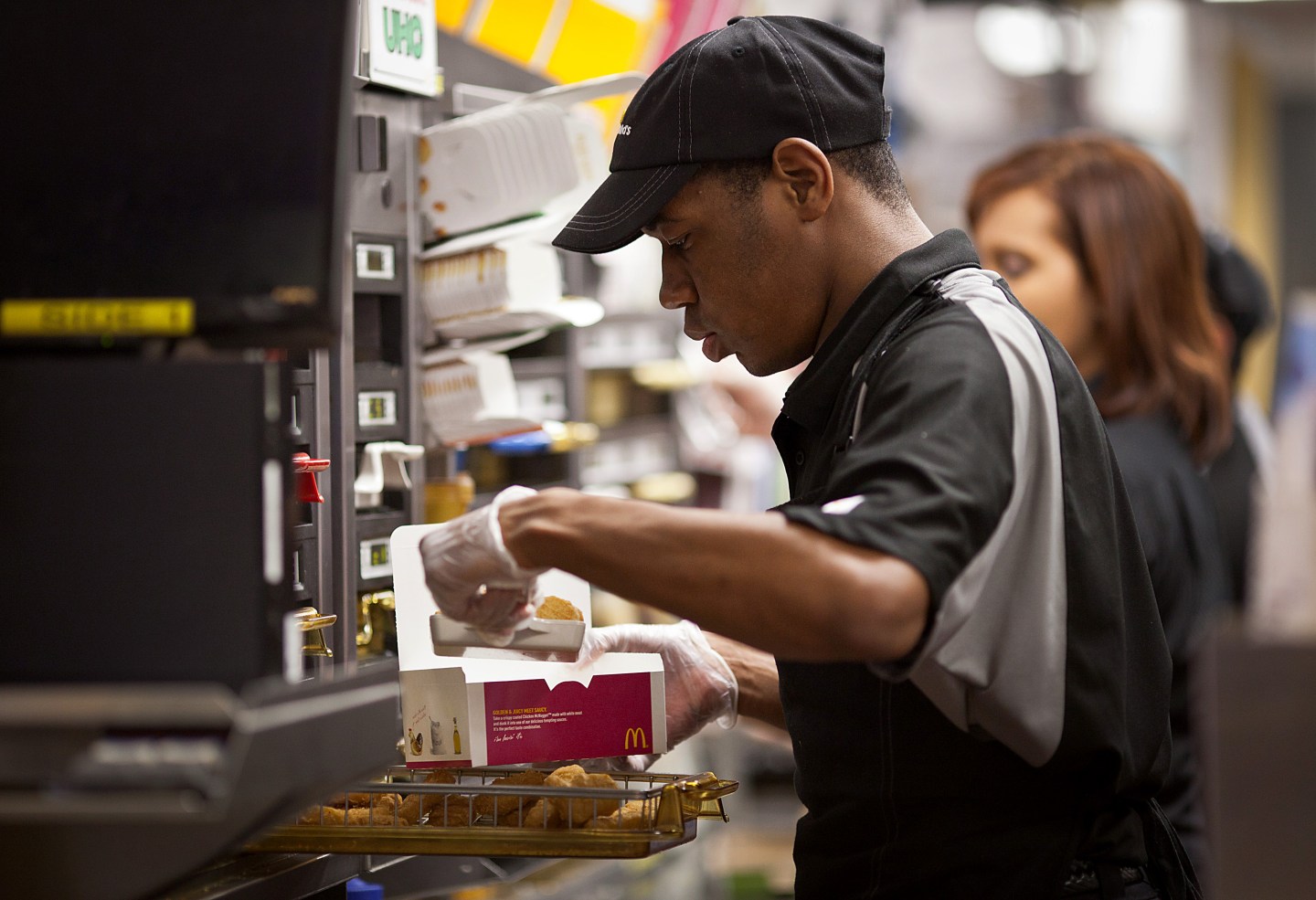 The general counsel of the National Labor Relations Board on Tuesday ruled that McDonald’s (MCD) qualifies as a joint employer of workers at its franchise restaurant locations, a decision that—if upheld—could hold the company responsible for employee conditions and ease the fast food industry’s path toward unionization.

McDonald’s disputed the decision and said that it plans to contest it. Its senior vice president of human resources Heather Smedstad said in a statement that the ruling “changes the rules for thousands of small businesses, and goes against decades of established law regarding the franchise model in the United States.” About 90% of McDonald’s 14,000 restaurants in the United States are owned by franchisees.

The ruling came in response to 181 unfair labor practice complaints filed in New York by the Fast Food Workers Committee (which is funded by Service Employees International Union), which accused McDonald’s of retaliating against workers who took part in organized activity. Finding that 43 of those complaints had merit, NLRB General Counsel Richard Griffin said that he would include McDonald’s as a joint employer in those cases going forward.

The ruling could spell potential upheaval for the fast food industry, which for decades has largely operated under the franchise structure, a scenario in which franchise owners are responsible for a restaurant’s day-to-day operations, pay royalties to a corporate overseer and follow the management guidelines that the mother corporation hands down. The retail industry employs the franchise system too and Tuesday’s decision prompted outrage from its largest industry group. “The last thing this economy needs is decisions like this which merely serve to stall job growth and diminish much needed capital investment,” the National Retail Federation said in a statement.

McDonald’s said on Tuesday that it relies on the franchising model to “run successful businesses as part of a system that every day creates significant employment, entrepreneurial and economic opportunities across the country.”

But ever since fast food workers started pressing for a $15 per hour wage two years ago, McDonald’s and other chains have also used the system to skirt responsibility amid outrage over low worker pay, claiming that they don’t set worker wages; franchise owners do. In its statement on the minimum wage, for instance, McDonald’s says that it bases its worker compensation on local markets and employees’ job levels. But it also relies on this point: “It’s important to know approximately 80% of our global restaurants are independently owned and operated by small business owners, who are independent employers that comply with local and federal laws.”

Tuesday’s directive weakens that defense and gives credence to labor organizers who have long argued that McDonald’s should be considered an employer because it controls so much of the operations at its franchise locations and leaves the franchise owners little freedom to make changes, including raising wages.

The decision could have a big impact on fast food worker wages. If the decision is upheld, it means McDonald’s can be found liable for violating fair labor practices that had previously been reserved for franchisees, according to Catherine Ruckelshaus, general counsel of the National Employment Law Project, who spoke on a press call organized by the Fast Food Forward campaign.

“McDonald’s can try to hide behind its franchisees, but today’s determination by the NLRB shows there’s no two ways about it: The Golden Arches is an employer, plain and simple,” said Micah Wissinger, an attorney who brought the case on behalf of McDonald’s workers in New York City, said in a statement.

In addition to better pay, the fast food worker movement is also seeking the right to organize, and Tuesday’s ruling could potentially give a boost to that effort as well, says Kate Bronfenbrenner, director of labor education research at the Cornell University School of Industrial and Labor Relations. “McDonald’s was saying it wasn’t an employer; it can’t say that anymore,” she says. “It’s no longer a debate.”

WATCH: McDonald’s is responsible for employee treatment, Labor Board Rules