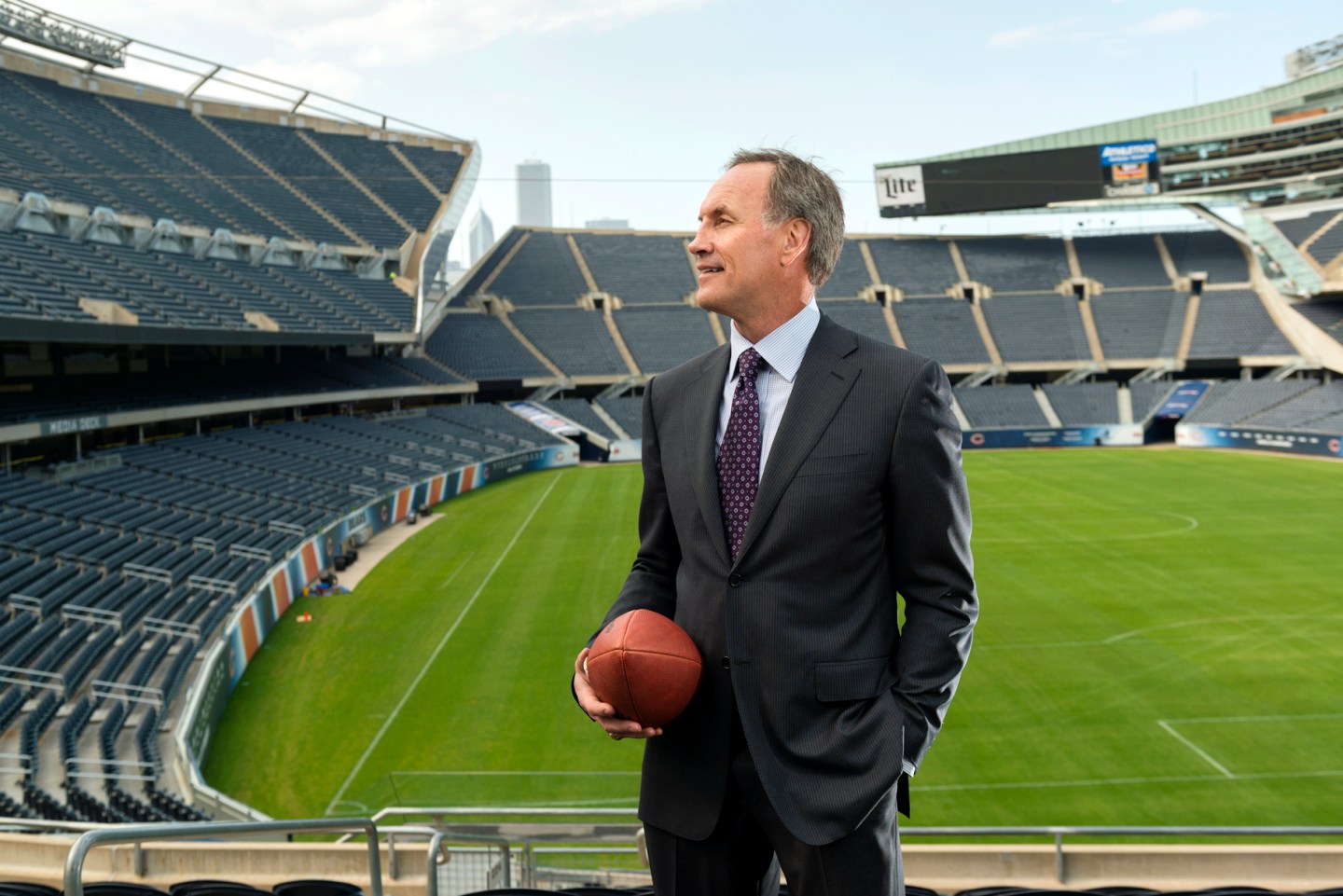 Transitions—that’s all life is: story time to blocks, school to work, retirement to dead. For many former pro athletes, though, there’s one transition that’s about as disorienting as they come: the seismic shift from the last season of play to the first year of “real job.” It’s like a mobster giving up the life.

Just ask one of Chicago’s famed “Hit Men,” Gary Fencik, who spent 12 seasons roaming the secondary as an All-Pro safety for the Bears. “I still have fun, but nothing will ever replace the excitement of football,” says Fencik, now 60. “You always miss the immediacy and clarity of the game. You go to work on Sunday, and three hours later someone has won and someone has lost. There are no postponed meetings, no wait-and-sees. It’s happened, and either you were good enough or not.”

Fencik, the Bears’ all-time interception leader, proved to be plenty good enough—and the feat is somewhat more remarkable given that his NFL career almost didn’t happen. Coming out of Yale in 1976, he was taken in the 10th round of the draft by the Dolphins and then cut that August. Fencik was all set to go with his backup plan, enrolling in a junior banking program at Citibank in New York. But before heading to Manhattan, Fencik, who grew up in the Chicago suburb of Barrington, flew home to see his folks. While there, the 22-year-old Ivy Leaguer got a call from Jim Finks, then the Bears general manager, who invited him to stop by Lake Forest for a tryout. (He made quite the impression: The rookie played in 13 games that same season.) Yet even after signing with his beloved hometown team, Fencik continued to plan for that “other life,” the one he’d begin after hanging up his cleats. “One of the benefits of going to Yale is I had roommates, classmates, even teammates who were going to med school, law school, business school,” he says, “so I never stopped thinking about what I was gonna do after football.”

The planning took on more urgency in 1979, when he suffered a series of minor calamities: breaking his arm opening day, shredding a knee, busting up an ankle. He found himself in an operating room, staring at the ceiling, acutely aware of his football mortality. Around that time an old friend and mentor called and said, “Gary, you need to start thinking about what happens later.” Fencik enrolled at Northwestern’s Kellogg School of Management soon after. In 1985, as the Bears made their run, he was spending two nights a week studying finance: “’85 was good,” he says. “I completed my MBA, we won the Super Bowl, and I met my wife.”

Two seasons later his gridiron days were done, and it was time to start that other life. Even with the MBA, and the Yale pedigree, and all that mental preparation, however, it was hard to make the transition. He did some work as a football analyst—a season doing color commentary alongside James Brown on CBS, then three more years on Chicago radio—and tried selling commercial real estate too. Then, in the summer of 1992, Wells Fargo recruited him to run its new investment-management office in Chicago, the latest outpost in the bank’s growing asset-management division. The 38-year-old Fencik was suddenly a VP at a major bank, and though he wasn’t tasked with actually managing any customer’s money—Fencik’s principal role was business development—he was now responsible for a territory that spanned 10 Midwestern states.

A few years later he jumped over to a private equity firm, Brinson Partners, then a unit of UBS Global Asset Management. There he met Bon French, a former investment star at First Chicago who was one of Brinson’s top dealmakers. French saw in Fencik a “very well-rounded” guy who “understood deeply how the investment world works.” Fencik had it all, French says: He knew to a fine degree how various asset classes—stocks, fixed-income investments, real estate, hedge funds, private equity—meshed together. And he was a natural at helping clients build portfolios with the right asset allocations.

“I go to meetings where they talk about goal orientation and teamwork,” he says. “And I laugh ’cause it’s like, ‘Well, yeah, I’m back in football.’”

So when French became CEO at Adams Street Partners, a rival private equity firm, he didn’t wait long before recruiting the Bears’ power defender. Fencik, who joined Adams Street in 2000, now heads global business development and marketing for the firm, which has 130 employees and manages more than $25 billion for institutional clients. (He won’t discuss specific clients or financial metrics, he says, because of compliance issues. But in March the firm pulled off a trifecta of sorts: Three companies that it funded through venture capital or private equity investments launched IPOs on successive days—Paylocity and Borderfree on the Nasdaq and Q2 Holdings on the NYSE.)

The 6-foot-1 safety, who played with a famously concussive style, turns out to have a soft touch with both clients and co-workers. “Gary is someone who can ask probing questions without putting the person on the receiving end on the defensive,” says French, who marvels at how well the former pro managed the transition from tackling to term sheets. “It is fascinating to me how he can move seamlessly and easily from one world to another,” he says. Fencik, for his part, is quick to credit his successful post-NFL reinvention to lucky timing. “I think it would be harder today,” he says. “Unlike when I was playing, football’s pretty much a full-time job. I think it would be even more difficult today to go to business school while you’re pursuing an athletic career. I was very fortunate that my dad was an assistant principal when I was growing up—education was always important.”

Fencik understands why so many athletes have trouble making a similar leap. “I can’t speak about every profession, but when it comes to finance, there is a period of time when you are supposed to be paying your dues,” he says. “Most people do that in their twenties. If you’ve played 10 seasons of pro sports, you’re going to be doing it in your thirties or forties, which is tough and lonely.” That said, his own days on Soldier Field helped prepare him for business too. “There are lots of clichés, but some are true,” he says. “I go to meetings where they talk about goal orientation, teamwork, holding people accountable, and I laugh ’cause it’s like, ‘Well, yeah, I’m back in football.’”

The most important lesson he learned during his pro career, notably, came not from succeeding but rather from coming up short. “At one time or another, most of us who played in the NFL were the best player on a team,” he says. “Then, one day, unless you’re a freak of nature like LeBron James or Walter Payton, you are no longer the best.” Part of the answer, he says, is “to study and work and figure out how to play better than you are.” But perhaps a bigger part is rediscovery. “As you get older,” says Fencik, “you have to learn how to be yourself all over again.”

WATCH: Gary Fencik: From the NFL to private equity