An education in entrepreneurship? At Stanford’s StartX, it starts with a wad of cash 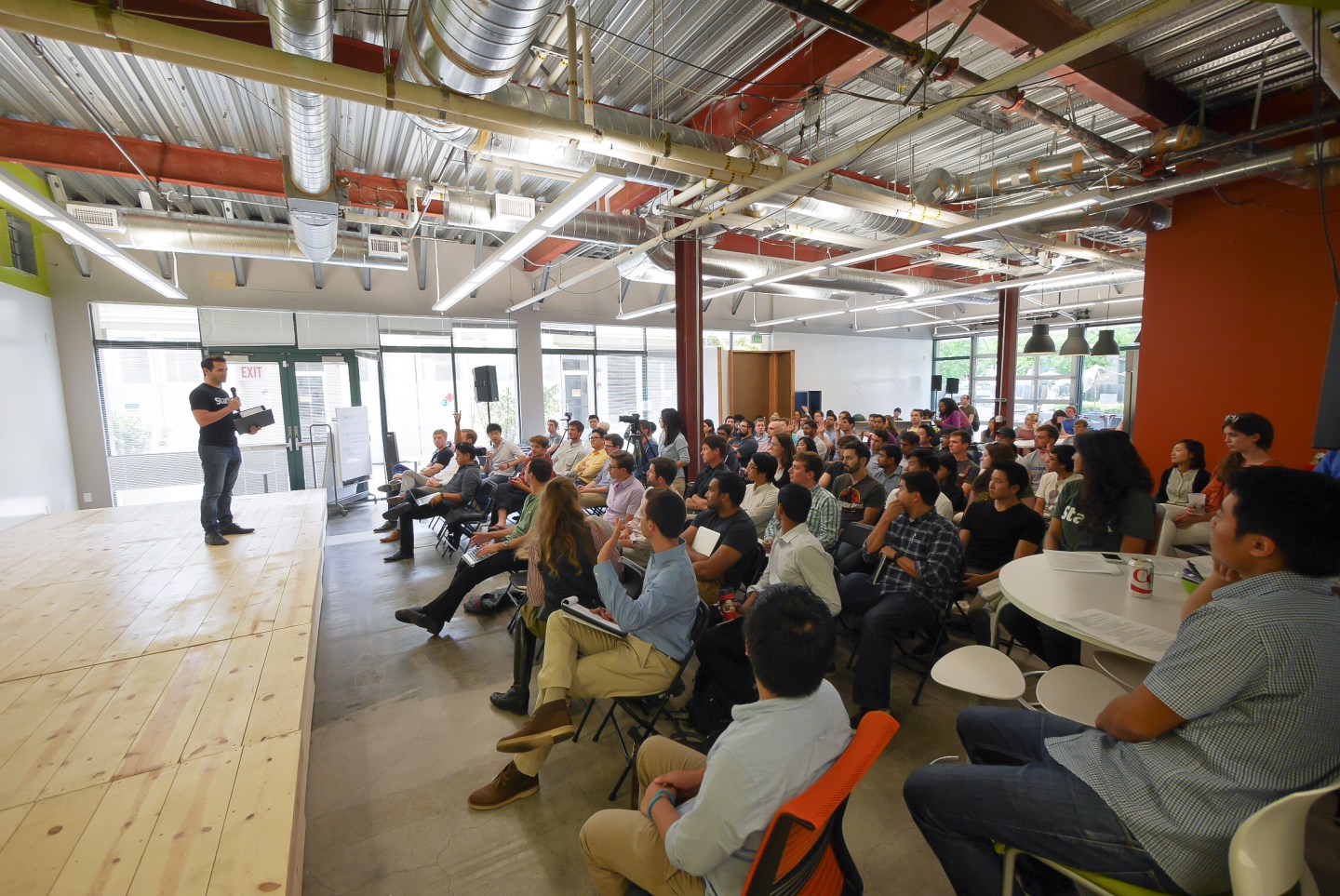 Think Stanford University is becoming a startup factory? You may be right. The school, along with Stanford Hospitals & Clinics, is investing $1 million to $2 million each month into student and alumni companies participating in StartX, a campus-affiliated accelerator program. That pace of investments may not let up for at least three years, says Stanford chief financial officer Randy Livingston.

In addition to the fund, Stanford provided a $3.6 million grant to the accelerator program to be doled out over three years. The cash allowed StartX, a nonprofit, to move into a rented 13,000-square-foot office and deck it out with a biotech lab, hardware workshop, coding rooms, event space, outdoor patio, and “pitch elevator,” a working elevator promoted as a place to practice your investor pitch.

Dorm-room innovation is not new. But the big financial push by Stanford raises startup culture to a new level, far exceeding the impact of accelerator programs and business plan competitions offered by most universities. The free-flowing capital also renews old questions about the school’s role in luring bright students to drop out of school for the next big thing. Last year, debate ignited after more than a dozen students left Stanford for a startup called Clinkle, backed and advised by a number of professors.

“The volume of investments is astounding,” says Phineas Barnes, a partner at First Round Capital, one of several venture capital firms that set up investment funds aimed at college entrepreneurs. In comparison, First Round’s fund, called the Dorm Room Fund, invests just $2 million over four years, spread across startups at a dozen schools. Barnes argues that the smaller amounts, typically $20,000 or less, allow students to run their companies and stay in school—as well as boost their entrepreneurial education by forcing them to be scrappy and resourceful. “There’s a danger when larger investments force students to choose between the university and the start-up, and choose before they have tested the idea and gathered enough market feedback to make an educated choice,” Barnes says.

Livingston counters that the university is committed to seeing students continue their education, and only a small fraction of StartX founders enter the program without having finished their undergraduate degree. The school still has one of the highest graduation rates in the country, he says.

The new Stanford-StartX investments are funded by the hospital’s and university’s capital reserves and have no limit. For the university, the dealmaking complements more than $20 billion it already has invested in everything from public stocks to venture capital funds to real estate. It may be up to a decade before Stanford sees a return on its StartX investments, Livingston says. Yet it makes sense for a school that has a storied history of spawning innovators and entrepreneurs. “We train and house these creative minds,” Stanford president John Hennessy says, “and it is only fitting that we invest in their future success.”

Other universities are watching carefully and will likely follow Stanford’s lead, says Chris Lesmes, former director of the Big Red Venture Fund, a student-run $2 million investment fund targeting startups at Cornell University and financed by alumni, not the school. Cornell recently opened a tech campus in New York City to be closer to the startup scene and is pouring more resources into its biotech labs and incubators. “The whole purpose of a degree from any institution is to advance opportunity,” Lesmes says, “so it would be unwise for universities to discount the startup scene.”

In Palo Alto, the pace of activity at StartX is a dizzying mirror of for-profit companies in Silicon Valley. The nonprofit has 50 volunteers and staff who put on 60 social mixers, speakers, and educational workshops every three months. As many as 100 people work inside the two-story office. Since September, the Stanford-StartX fund has backed 50 ventures with $16.4 million. In 12 months, the accelerator helped 70 companies get off the ground, and 16 startups have been acquired since 2009 by such giants as Google (GOOG), Dropbox, and Yahoo (YHOO).

The Stanford-StartX fund does not invest in every company accepted into the StartX program, but any StartX company that applies for the fund and gets 30% of its capital from institutional investors is guaranteed a cash infusion from the StartX fund. The fund provides 10% of a company’s investment round. “It’s trigger-based,” says Alexa Lee, StartX’s spokeswoman. “If you qualify, you get the money.”

MindSumo was one of those companies that qualified for cash. In 2011, two recent Stanford grads and a pal started the company because they wanted to create a place where students could work on projects for companies that would give them experience and job prospects. StartX welcomed the startup into the incubator and in its second year, MindSumo nabbed nearly $2 million from investors that included the new Stanford-StartX fund. The company has since signed up 350 corporate clients and hired 10 people. Trent Hazy, MindSumo’s co-founder, says participating in StartX felt like getting an education in entrepreneurship, with expert help on tasks such as designing the site, pitching clients, and negotiating terms with investors.

“While other accelerators focus on how much traction you’ve made, the emphasis at StartX was always ‘what did you learn this week?’” he says. “Plus, it puts you in touch with some of the greatest Stanford minds who literally open their Rolodex to you.”