GM plans to launch more diesel cars in the U.S. 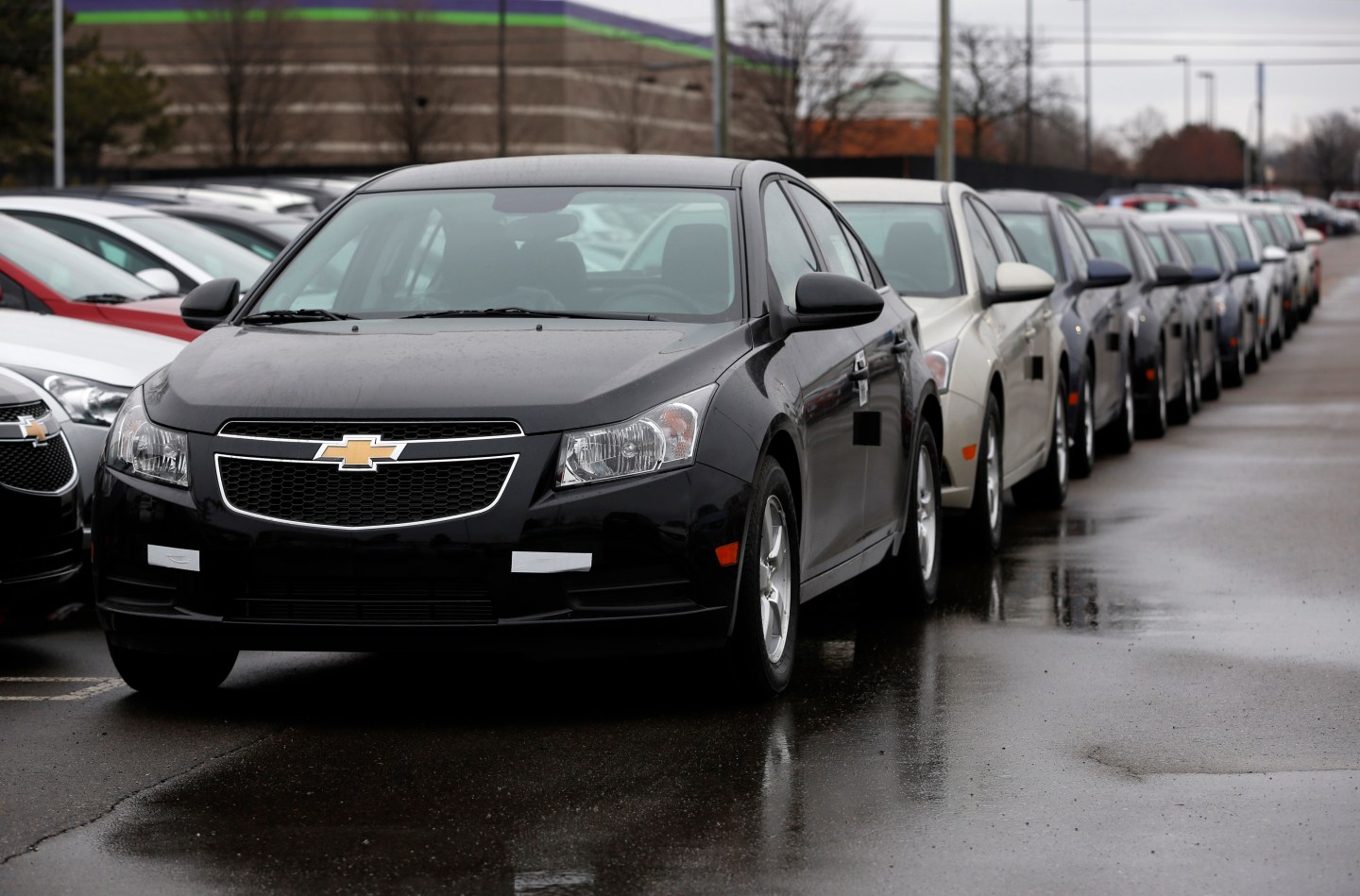 General Motors Co. 2014 Chevrolet Cruze vehicles sit on the lot at a dealership in Southfield, Michigan, U.S., on Friday, March 28, 2014. General Motors Co. said it has instructed dealers to stop selling some 2013 and 2014 Chevrolet Cruze compact cars with 1.4 liter engines while not saying why the halt was ordered. The Cruze isn't part of the recall of 1.6 million cars that GM has been dealing with in the past month after faulty ignition switches were linked to the deaths of 12 people. Photographer: Jeff Kowalsky/Bloomberg via Getty Images
Photo by Bloomberg—Getty Images

The word “diesel” probably elicits one of three reactions from most Americans: A disgusted comment about black smoke, a curious glance that says they don’t know what diesel is, or a story about the time they accidentally put diesel in their engine and worried they’d ruined their car.

All that could be changing, though. Steve Kiefer, the General Motors’ vice president who oversees engine production, said in a speech Tuesday that he thinks 10% of the U.S. market could be made up of diesel cars by 2020, echoing past statements from GM (GM) executives.

The Chevrolet Cruze diesel will be the first of many diesel-powered passenger cars General Motors will offer in the United States, Kiefer said in his speech.

Lauren Fix, an automotive columnist who goes by the title “The Car Coach,” said she agrees, and that diesel’s image is changing stateside.

“Diesel today is about performance,” she said. “Its a great alternative to a hybrid, because what you lose with a hybrid is towing capacity.”

Diesel cars are tremendously popular in Europe, especially among German manufacturers. For several years, more than 50% of new cars sold in Europe have been diesel engines, according to data from the European Automobile Manufacturers Association.

IHS analyst Jeff Jowett thinks that Kiefer and Fix might be right, but that “a lot of stars would have to align” for the 10% number to actually be reached. Price of fuel is still a concern for some consumers, with diesel still costing between 40 and 50 cents more per gallon than gasoline.

Part of the reason people buy hybrids cars, of course, is because they want to “go green.” While diesel may not be quite as clean as a hybrid, Fix notes that the tailpipe emissions from diesel cars are less harmful to the environment that from gasoline cars. She also says there is at least one environmental concern with hybrids that isn’t often discussed: What happens to the batteries when they die?

“At some point [the battery is] going to be depleted,” she said. “What are you going to do with it? There’s no systems as we speak right now that fully break down batteries without having hazardous waste.”

Besides being environmentally conscious, there’s another reason people like hybrids: The gas mileage and the money saved by fewer trips to the pump. On this, Fix says, diesel cars might even have hybrids beat.

In a road test, the Audi A3 got 52 miles to the gallon, for example. She said she could drive her Porsche Cayenne with a diesel engine on a round trip between New York City and Buffalo — a total of about 800 miles — on more or less one tank of diesel. A gasoline car would need to be refueled.

Jowett said that diesel cars and hybrids should actually compliment each other, not compete.

So, if everyone in Europe loves them, they’re more environmentally friendly, sufficiently powerful and get good mileage, why are diesel engines just now catching on stateside? It comes down mostly to branding and perception.

“[Americans] know diesel as ‘Oh my gosh, those are like school busses!'” Fix said. People in their 40s and 50s are just too set in their ways and are unlikely to buy diesel. Jowett called this an “overplayed excuse,” but acknowledged that “there is some truth to it.”

Part of the problem, Jowett said, is that most of the newer, smaller diesel cars are so quiet and smooth that people don’t even know they’re diesel, leaving stereotypes of black smoke and pickups.

“What we still struggle with in this country is the vast amount of pickup truck diesels that are still out there,” he said. “When you mention diesel, I’m afraid that’s what a lot of American consumers think about.”