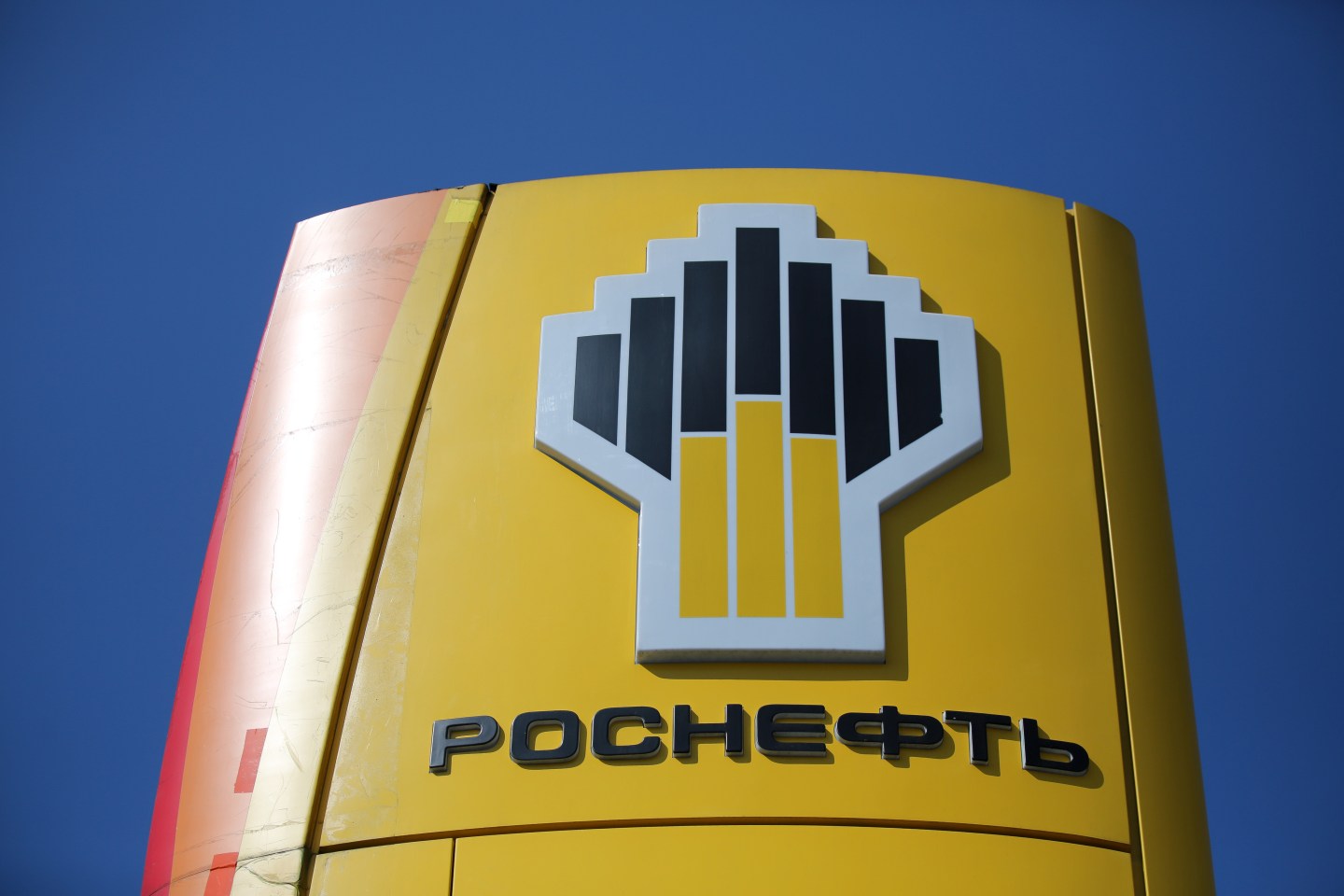 A logo sits on a sign outside an OAO Rosneft gas station in Moscow, Russia, on Friday, July 18, 2014. Russia's biggest oil company, natural gas producer OAO Novatek and OAO Gazprombank, the third-largest lender, are among those hit by the penalties, the U.S. Treasury Department said. Photographer: Andrey Rudakov/Bloomberg via Getty Images
Bloomberg via Getty Images

BP Plc (BP) said its underlying second-quarter profit rose 34% from a year earlier to $3.64 billion and announced a quarterly dividend of 9.75 a share, beating analysts’ forecasts. However, the good news was overshadowed by a warning about its exposure to Russian oil company OAO Rosneft, which is poised to be hit with further U.S. and European sanctions after already being shut out of U.S. capital markets. Rosneft, in which BP has a 20% stake, accounted for nearly a third of BP’s profits in the quarter. The U.K. company warned that “any future erosion of our relationship with Rosneft, or the impact of further economic sanctions, could adversely impact our business and strategic objectives in Russia, the level of our income, production and reserves, our investment in Rosneft and our reputation.” The shares jumped at first but fell back after absorbing the warning, and were up 0.4% after an hour’s trading.

French carmaker Renault SA (RNSDF) was another to suffer from a souring bet on Russia, after it said industry-wide car sales there will probably fall 10% this year (they were down 7.6% in the first half). Renault and its partner Nissan own a majority stake in AvtoVaz, Russia’s largest automaker. But Russia wasn’t the only emerging market to pose problems: Bloomberg quoted chief financial officer Dominique Thormann as saying that the company expects further declines in Brazil too, and has “very limited visibility on Turkey, Algeria and Argentina.” It did better in its home E.U. market, where the new Captur compact drove a 14% rise in sales. The shares fell 3.5%.

Obviously, it matters which emerging markets you’re in. Japan’s Honda Motor Co. (HNDAF) said net profit rose 20% to 146.5 billion yen ($1.44 billion), thanks to surging sales in India and Indonesia, up 40% and 68% respectively. That offset a 3.1% fall in sales in the U.S., its largest market, and flat sales in Europe. The company raised its full-year profit forecast by 1% to 600 billion yen, although it cut its sales forecast for the motorcycles division, amid long-term weak demand in Europe. The stock fell 0.8% in Tokyo.

Elsewhere, big finance turned in a mixed bag of results. Switzerland’s UBS AG (UBS) beat expectations slightly with an adjusted pretax profit of 1.2 billion Swiss francs ($1.32 billion), after a surprisingly strong performance across the board (although it said it would be hard to beat that over the rest of the year). But the shares fell 0.9% as it acknowledged that it is “responding to inquiries” from U.S. regulators about the ‘dark pool’ it operates in New York, hinting at the risk of further conduct-related problems. UBS did draw a line under a dispute with German tax authorities over previous assistance given to tax dodgers, paying €300 million. But it is still in dispute with French tax authorities, however, and last week was ordered to post a €1.1 billion guarantee against future liabilities–a ruling it is appealing.

Deutsche Bank AG (DB) said net profit fell to €238 million from €335 million a year earlier, as revenues fell 4% and higher regulatory costs and another €470 million in litigation charges bit. One of the biggest players in global financial markets, Deutsche was hit by reduced client activity in both foreign exchange and fixed-income, and also managed to miss out on the boom in equity markets. Despite low trading volumes, it said the outlook for investment banking was “very good”. especially for merger and acquisition work, which it said should also support the debt and equity capital markets businesses. Deutsche, whose reporting practices have come under the spotlight recently as U.S. regulators question the reliability of its internal accounting, still has one of the biggest gaps of all the large global banks between total assets and risk-adjusted assets, reflecting its own confidence that it has adequate control over the risks on its balance sheet. While total assets were €1.909 trillion at the end of the quarter, risk-adjusted assets under current rules were only €314.3 billion. The shares fell 0.6% initially but later recovered to be up 0.2% by 0500 EDT.