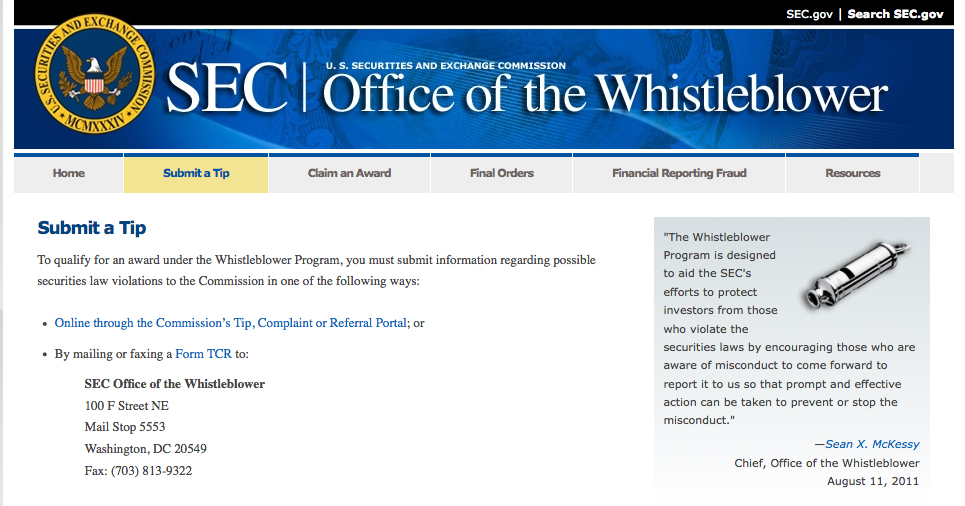 A court fight over a $14.7-million bounty has publicly identified the anonymous recipient of a record whistleblower award from the Securities & Exchange Commission.

The government credits the late-2012 tip with halting an audacious fraud perpetrated through the federal visa-for-sale program, known as EB-5, by a young Chicago promoter named Anshoo Sethi.

Sethi raised $147 million from rich Chinese investors for a massive project near O’Hare airport, which he marketed as the “World’s First Zero Carbon Platinum LEED-certified” hotel and convention center complex. He was charged in a February 2013 SEC fraud complaint, which was settled with fines and other sanctions this March, without any admission or denial of guilt. The matter also triggered a federal criminal investigation. (The Sethi case is investigated in-depth on Fortune.com.)

His identity was exposed in a lawsuit, previously unreported, filed on June 23 in federal court in Chicago by his business partner, John Tung.

In a court filing and an early-July telephone conversation with Fortune, Sears confirmed that he was indeed the award recipient, but would publicly discuss only a few details about the tip. He declined to talk about his dispute with Tung.

Tung, who outed him, is also 62, a principal in the firm and a veteran of the real-estate financing business, according to the firm’s website. The two men have worked together for more than a decade.

Last Friday, Sears’ attorney convinced the presiding judge to seal the case file in the dispute, after filing an emergency motion asserting that disclosure of his identity “puts the Defendant in jeopardy for his personal safety and the safety of his family.” Sears’ lawyer also urged Fortune, which obtained the complaint and other documents before the sealing, to withhold publication of his name.

In his 15-page complaint, Tung claims that Sears welched on an agreement to share the windfall from the tip, which he says resulted from “their joint efforts and investigation.” He demands a full accounting of the whistleblower money and seeks the immediate “imposition of a constructive trust” to “preserve his ability to recover the funds lawfully due to him.”

Tung asserts that he, Sears, and a third partner in their business, Michael Kolodner, 63, became increasingly suspicious of Sethi’s project during 2012 after learning about it while promoting an EB-5 investment of their own to Chinese investors. (Kolodner also did not return calls for comment.)

Tung insists that, although Sears is the one who traveled to China, the three men collaborated in investigating the Chicago project, and that Sears made “an unambiguous promise” to share in any bounty.

Yet “after receipt of the $14.7 million award,” Tung’s suit alleges, “Sears turned on his partners, refusing to distribute to them any portion of the award, notwithstanding their common work in developing the information or their agreement and understanding that any award from the SEC was to be distributed to all three partners upon receipt.”

Tung says he and Sears were both supposed to receive a 45% share of the money, consistent with their respective stakes in the firm, while Kolodner, who joined the firm in 2005, was supposed to get 10%, reflecting his smaller stake. Instead, according to Tung, Sears cut him out altogether, while striking a side deal with Kolodner.

In court papers and a brief interview conducted before the file was sealed, Sears offered a very different portrait. He says that although he never met Sethi, he became suspicious about his project while traveling in China, after hearing about it from others in the EB-5 business and examining its aggressive online marketing. He then alerted the SEC by filling out a detailed whistleblower form on the agency’s website—which he says took all of 30 minutes. He says he later met with SEC investigators to discuss his suspicions.

“John Tung had nothing to do with this case other than engaging in casual conversations with me and taking pictures of the investment project in Chicago which were requested by the SEC,” Sears says in an affidavit dated July 14. “In fact the case was opened by my filing a whistleblower complaint with the SEC in Washington, D.C., and I did not discuss the filing with John Tung or Mike Kolodner until I was notified by the SEC that they were interested in pursuing the matter.”

The SEC tip halted Sethi’s scheme, leading to the return of $147 million, which had been held in escrow, to nearly 300 wealthy Chinese investors, who put up $500,000 apiece in hope of receiving green cards. Whistleblower payments, which can range from 10-30% of money collected in a case, do not reduce the amount returned to harmed investors.

The SEC approved the record tipster award last fall, without identifying either Sears or the SEC enforcement case that resulted. Its order said the amount “appropriately recognizes the significance of the information that the Claimant provided to the Commission, the assistance the Claimant provided in the Commission action, and the law enforcement interest in deterring violations by granting awards. A February 2014 Wall Street Journal article reported that the record award resulted from the Sethi investigation.

An SEC spokeswoman declined comment on the identification of the record award recipient.