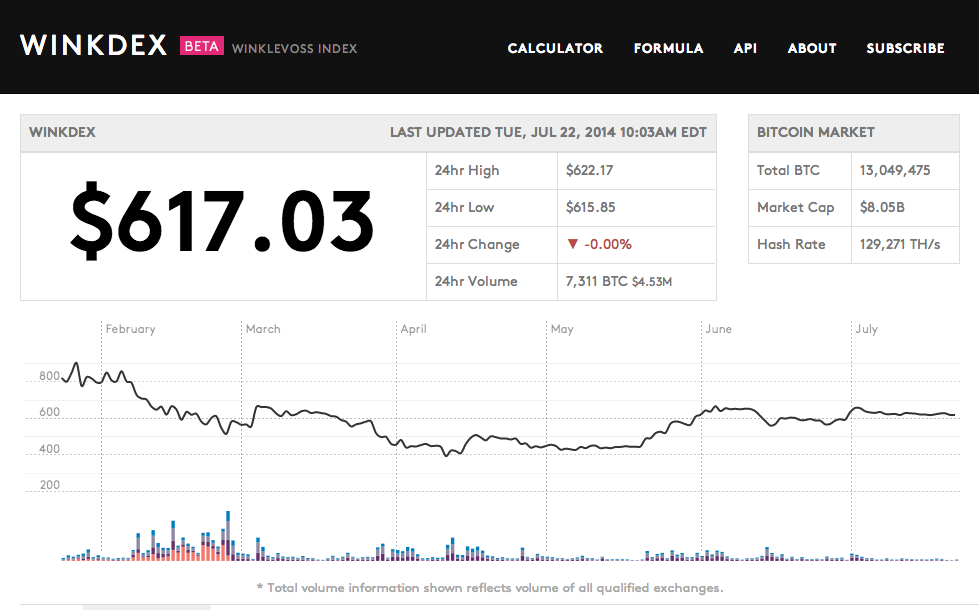 You may have heard by now that Cameron and Tyler Winklevoss, the tech investors and Olympic rowers made famous for their early association with Facebook, have shown some interest in digital currency.

Last February, the twins jumped into the Bitcoin craze by launching their own pricing index. Nicknamed the “WinkDex,” the Winklevoss Index is one of a handful of Bitcoin pricing indexes that seek to pinpoint a current value for a commodity that is in constant flux.

Now, Fortune has learned that the brothers will open the API, or application programming interface, for their index today so that developers can build on top of it.

That news in itself may not seem significant, but it is the first step in a larger play by the Winklevosses, who wish to become legitimate arbiters in the Bitcoin community. In addition to allowing access to the API, the Winklevosses will launch iOS and Android apps for their index. Most importantly, the brothers have plans to launch a much-anticipated Bitcoin ETF, or exchange-traded fund, that will allow brokerages to buy and sell Bitcoin without some of the normal regulatory and security headaches that can come with that process. The ETF, to be called the Winklevoss Bitcoin Trust, is still going through the lengthy filing process with the SEC, but will trade on the NASDAQ OMX under the symbol COIN and will take its pricing from the WinkDex, automatically giving the index a degree of credibility.

“We’ve spent a lot of time trying to build a really cool tool,” Cameron Winklevoss tells Fortune. “Obviously the index will be big for us because it will be used to price any future ETF. But we also wanted to build on this for the betterment of the Bitcoin community.”

That community is a rabid and vocal one—one in which the Winklevosses still have ground to gain. “Their index is not, today, seen as the leading one,” says Will O’Brien, chief executive of BitGo, a Bitcoin security platform whose investors include the actor Ashton Kutcher and SecondMarket founder Barry Silbert. “But if developers really embrace this, you’ll have a crowd effect where credibility becomes de facto.”

For the first few years of Bitcoin’s existence, the go-to pricing index and exchange was Mt. Gox, but the site shut down for good in February, making room for a new index to fill its role. “There’s going to be volatility, naturally, in any system that is new and getting its footing,” Cameron says. “But I think if you and I are trying to price some good or product, having a smoother near-term price makes more sense. A blended Bitcoin price is important, because you want to smooth it out and use a two-hour window. We look at every single trade.”

O’Brien says that WinkDex is seen as relatively reliable, though it is one of many options: “The reality is Bitcoin is moving so fast that if someone just picks, say, Bitstamp as their pricing index, they just use that metric all the way until that index fails and then they find the next one.”

The Winklevosses hope to be that trusted “next one.” Perhaps design will help: the WinkDex website is clean and crisp and it happily displays, in a clear ticker at the bottom, the current Bitcoin price on its own index as well as on other leading indices and exchanges, including Bitfinex, Bitstamp, BTC-E, CampBX, and even LocalBitcoins, a sort of Craigslist for Bitcoin exchanging where people arrange to meet in person for trades. (Of these, the first three are relatively trustworthy, and listed prices within eight dollars of each other on Monday afternoon; CampBX, currently facing regulatory problems, offered a much higher price to attract traders.)

The brothers hope their services might also make the entire Bitcoin process more appealing to outsiders. “Whenever I talk to big companies or financial institutions about Bitcoin, they always say at the beginning of the conversation, ‘We’re sorry for asking all these dumb questions,’” O’Brien says. It’s a common sentiment: the early Bitcoin investor Roger Ver, sometimes called the “Bitcoin Jesus,” is regularly seen wearing a t-shirt that says, “Ask me about Bitcoin.”

“The learning curve is there, but people are getting excited about it,” O’Brien says. “The number of holders and users of Bitcoin is still small, but I perceive us to be on an exponential growth curve now that will be faster than social media, faster than personal computing was.”

The Winklevosses believe their index is positioned to gain the respect of the tech-savvy traders who already use the digital currency and still appeal to amateurs or skeptics who have so far resisted investing. Still, not everyone in the Bitcoin community has had nice things to say about the brothers’ effort, and the impact of opening up their API will solely depend on what developers build on it, and whether they care to build anything in the first place.

“That’s the fun part a little bit, is not knowing what the hell people are going to do on it,” Cameron says. “It’ll be really interesting to see what people do. And even though ostensibly an API of a pricing product is not super sexy, this matters to the Bitcoin community.”