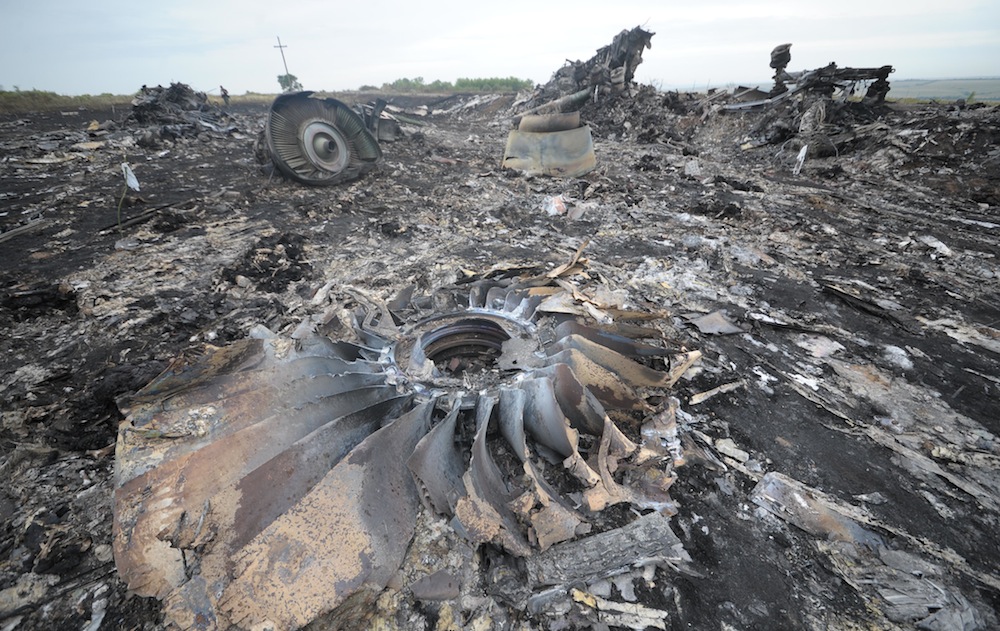 DONETSK, UKRAINE - JULY 18: A part of plane is seen amongst the wreckages of a Malaysia Airlines Boeing 777 carrying 295 people from Amsterdam to Kuala Lumpur after it was downed close to Russia's border with Ukraine on July 17, 2014, near the town of Donetsk, Ukraine on July 18, 2014. (Photo by Soner Kilinc/Anadolu Agency/Getty Images)
Anadolu Agency—Getty Images

The downing of a Malaysian airliner over Ukraine Thursday is likely to ramp up hostilities between Russia and the West, ultimately leading to tougher economic sanctions for Moscow and increased fighting in eastern Ukraine. Russian President Vladimir Putin will come under intense domestic pressure to increase support for Ukrainian separatists in the wake of the tragedy, putting the Kremlin in a difficult position vis-à-vis the West. The situation could quickly spin out of control, leading to dire economic consequences for Russia as well as for the dozens of U.S. and European companies that do business there.

While the investigation into the crash of Malaysia Airlines flight 17 is just getting underway, the evidence so far suggests that the Boeing 777 aircraft, with nearly 300 people on board, was brought down by a missile launched by Russian-backed Ukrainian separatists. One of the leaders of the separatist movement, Igor Stelkov, boasted on his Twitter feed yesterday morning that his men had just shot down a Ukrainian cargo plane at the same time and place the Malaysian airliner fell from the sky. Coincidence? Doubtful. Those Tweets have since been removed.

While it is becoming increasingly clear who shot the plane down, the motive behind the crash remains a mystery. How could anyone confuse a massive Boeing 777 aircraft with an old Soviet-era cargo plane half its size? How could a rag-tag group of rebels even get ahold of a weapon powerful enough to blow a commercial airliner out of the sky traveling at an altitude of 33,000 feet? And what was a commercial Asian airline doing flying over the conflict zone in the first place?

Well, mistakes happen in war and it could very well be the case that an itchy trigger finger is to blame here. The separatists had downed two Ukrainian military aircraft in the area earlier in the week, a cargo plane and a fighter jet, so we know that planes were being targeted. Protocol may have been ignored in the haste to get another kill. Fear of being bombarded by the Ukrainian Air Force may have also clouded the judgment of the fighters on the ground.

The Malaysia Airlines jet wasn’t being reckless in flying over Ukraine, it was just one of hundreds of planes flying on one of the established air superhighways, the L980, which connects Europe and Southeast Asia and goes through Ukraine. The jet, which took off from Amsterdam on its way to Kuala Lumpur, wasn’t the only airliner using the L980 that day. Indeed, at the time the aircraft lost contact with the ground, both a Singapore Airlines Boeing 777 and a brand new Air India Boeing 787 were both no more than 15 miles away in either direction.

So, what happens next?

While Russia supports the separatists with intelligence, training, and possibly cash and small arms, they aren’t providing significant military assistance. If the Russian military were conducting operations in the country, then Kiev would be smoldering. The truth is that the separatists are getting pounded badly by Ukraine and Russia has done very little to stop it. In the battle for Donetsk in June, for example, Russia stood on the sidelines as Ukrainian troops killed scores of separatists and retook control of the airport. The Ukrainian Air Force is now in full control of the air space above the combat zone and has conducted bombardments against civilian and military targets with little resistance, save for the surface to air missiles. But even then, the separatists are terribly outgunned and outmanned.

The Russian media, even the state-controlled media, have been critical of President Putin’s restraint in the matter. His popularity rating has taken a nosedive since Ukraine began its offensive against the separatists last month. While Putin isn’t interested in a full-scale invasion of the Ukraine or in annexing Ukraine’s eastern territories, he may no longer have any choice in the matter. At the very least, Putin will be compelled to institute some sort of “no-fly zone” over eastern Ukraine. While that falls short of an invasion, it does eliminate the Ukrainian air advantage over the separatists, making it much harder to fight them.

President Obama first heard of the Malaysian crash Thursday morning while on a conference call with President Putin. The two were discussing the latest round of U.S. sanctions against Russia announced on Wednesday. These sanctions were similar to others the West had levied against Russia over the Ukrainian affair—pretty weak. The latest sanctions would primarily limit U.S. investors and banks from engaging in long-term financing agreements with Rosneft, Russia’s state-controlled oil company. This will hurt the company’s ability to refinance its debt, but the firm could easily seek alternative financing from Asian and Middle Eastern sources. In any case, Rosneft’s interest coverage, which measures a company’s ability to cover its debts, is around 13, meaning it is more than capable of making its debt payments.

The E.U. didn’t match the U.S. sanctions on Wednesday; rather, it “urged” the European Investment Bank to refrain from signing new financing agreements with Russia. It also suspended operations financed in Russia by the European Bank for Reconstruction and Development.

But with the majority of those killed in the crash being E.U. citizens—mostly Dutch headed to Asia and Australia on holiday—the E.U. might rethink their position and end up matching the U.S. sanctions.

Granted, it is much easier for the U.S. to ratchet up its sanctions against Russia as it is far less dependent on the country economically compared to the E.U. Sure, the Russians can kick ExxonMobil out, but that would do more harm to Russia than to the U.S. as the Russians need Exxon’s expertise to help them tap their oil reserves. The most exposed U.S. companies are some of the nation’s largest multi-nationals like Boeing, General Motors, and Cargill. But the Russian market isn’t so significant to any of those companies; losing access to Russia would not in any way sink them.

By contrast, E.U. companies have significant investments in Russia—around 50% of all imports entering Russia come from the E.U., making it a very important consumer of E.U. goods and services. Germany has probably the most to lose here, as its companies have forged very close relationships with Russia over the years. German chemical maker BASF, for example, derives around a quarter of all of its sales from Russia, while German clothing maker Adidas counts on Russia for 16% of its total sales.

Energy is the real biggie here, though, accounting for around 75% of the total trade between Russia and the E.U. Russia supplies around a third of the E.U.’s natural gas. Tougher sanctions could end up hurting Europe as hard, if not harder, than it would Russia.

But economics tend to take a back seat to safety. If E,U, citizens feel threatened by an increasingly aggressive Russia, then the E.U. will have no choice but to impose stronger sanctions, no matter the cost. Such dire economic consequences may be the key to finally force both Putin and Ukraine to the bargaining table.