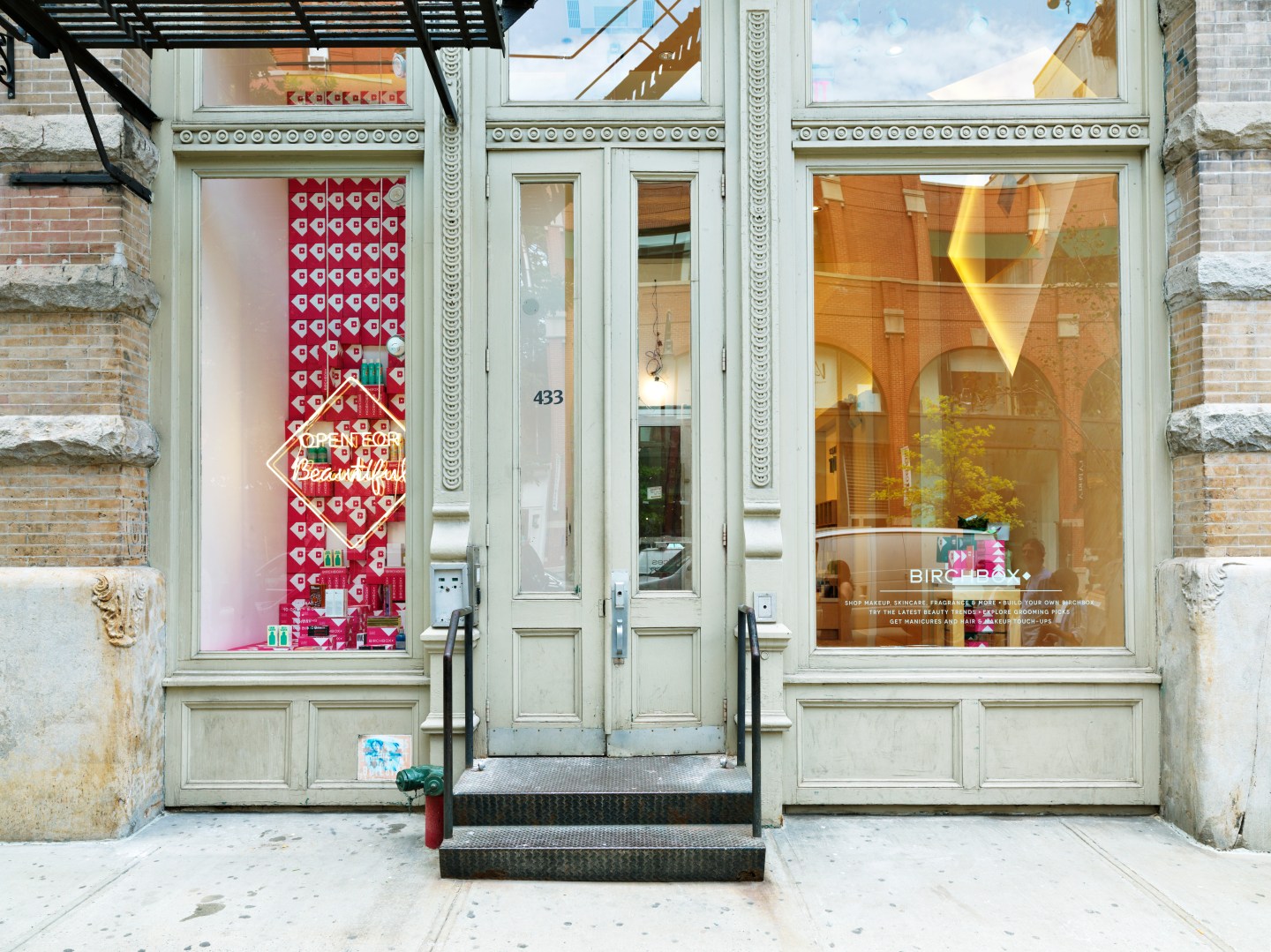 The first brick-and-mortar Birchbox store in the Soho neighborhood of New York City.
Courtesy of Birchbox

On a sidewalk in New York’s Soho neighborhood this week, two women’s eyes lit up as they approached the glowing front window of a new retail store from Birchbox, the company best known for selling mail order subscriptions for beauty product samples. “Store opens Friday,” the security guard offered. “You know the Birchbox?”

With her gaze fixed on the wall of pink cardboard boxes behind the glass, one of the women approached the window and snapped a photo with her iPhone. She was spellbound. “Oh I know the Birchbox,” she murmured hypnotically. Even as she walked away, her eyes stayed locked on the window.

It’s no secret that in three and a half years, Birchbox, has built up a devoted following. More than 800,000 women subscribe to the company’s monthly beauty sample boxes. (The company also offers boxes for men.) Half of them purchase full-sized versions of those items on Birchbox.com. They’ve written millions of reviews on the site, and watched just as many “haul” videos showing the boxes’ contents on YouTube. They will undoubtedly be just as excited about Birchbox’s next move, a brick-and-mortar retail store, which opens its doors today in downtown Manhattan.

Inside the store, there’s plenty for them to like. Birchbox’s approach to brick-and-mortar retail carefully mirrors the digital brand it’s known for. Editorial displays carry copy with a tone that matches the website, and there are iPads that promise personalized offerings. Naturally, the store’s pink, white, and tan color scheme matches the boxes it sends to its female subscribers.

Earlier this week, Katia Beauchamp and Hayley Barna, the company’s co-founders and co-chief executives, showed off all the ways their store would be different from other brick-and-mortar beauty stores. For one, the company’s new store is merchandized by category, not brand. This would normally be an affront to beauty brands, which typically require department stores and drug stores to group all of their products together in one big, branded display. In the Birchbox store, items are arranged the same way they’d appear online, in sections like “BB Cream” (as in “beauty or blemish”) or “second-day hair products.”

Barna says the company’s sales associates were thrilled about this development because they no longer have to drag customers all around the store to show them different brands of eyeliner. The brands would have never agreed to it if they didn’t already have relationships with Birchbox, Beauchamp said. Moving from the online sales environment to an offline one—rather than the usual other way around—gave the company an advantage, she added.

Despite the many physical products placed around the store, the space leans heavily on the company’s online presence. The iPads placed around the floor offer more products, reviews, and video tutorials from Birchbox.com. A physical display in the front of the store shows a rotating inventory of the top online sellers, and a large interactive display in the back allows shoppers to input their attributes (hair type, skin color, age, et cetera) for new product recommendations using their finger.

At a counter in the back of the store, shoppers can put together custom boxes of beauty samples. Downstairs, across from a corner of Birchbox for Men products—which the company expects will be purchased mostly by women as gifts—is a Birchbox salon, where professionals offer manicures, hair styling, and makeup services. The company says it will play host to appearances from various beauty celebrities and offer free classes for subscribers on makeup techniques like contouring and nail art.

In April, Birchbox raised $60 million in new venture funding, which valued the company at $485 million. In its announcement, the company said it would use the capital to amp up marketing and possible international expansion beyond the U.S., France, Spain and the U.K.

Birchbox has since been flooded with incoming calls from interested landlords and realtors around the country, which Barna said came as a surprise. If all goes well in New York, Birchbox may expand to more brick-and-mortar stores. For now, the company says its Soho store will serve as an experiment to learn about the ways its obsessive and devoted customers interact with the products. Of course, it’s also a chance to win over any casual beauty shoppers who, for whatever reason, don’t already “know the Birchbox.”