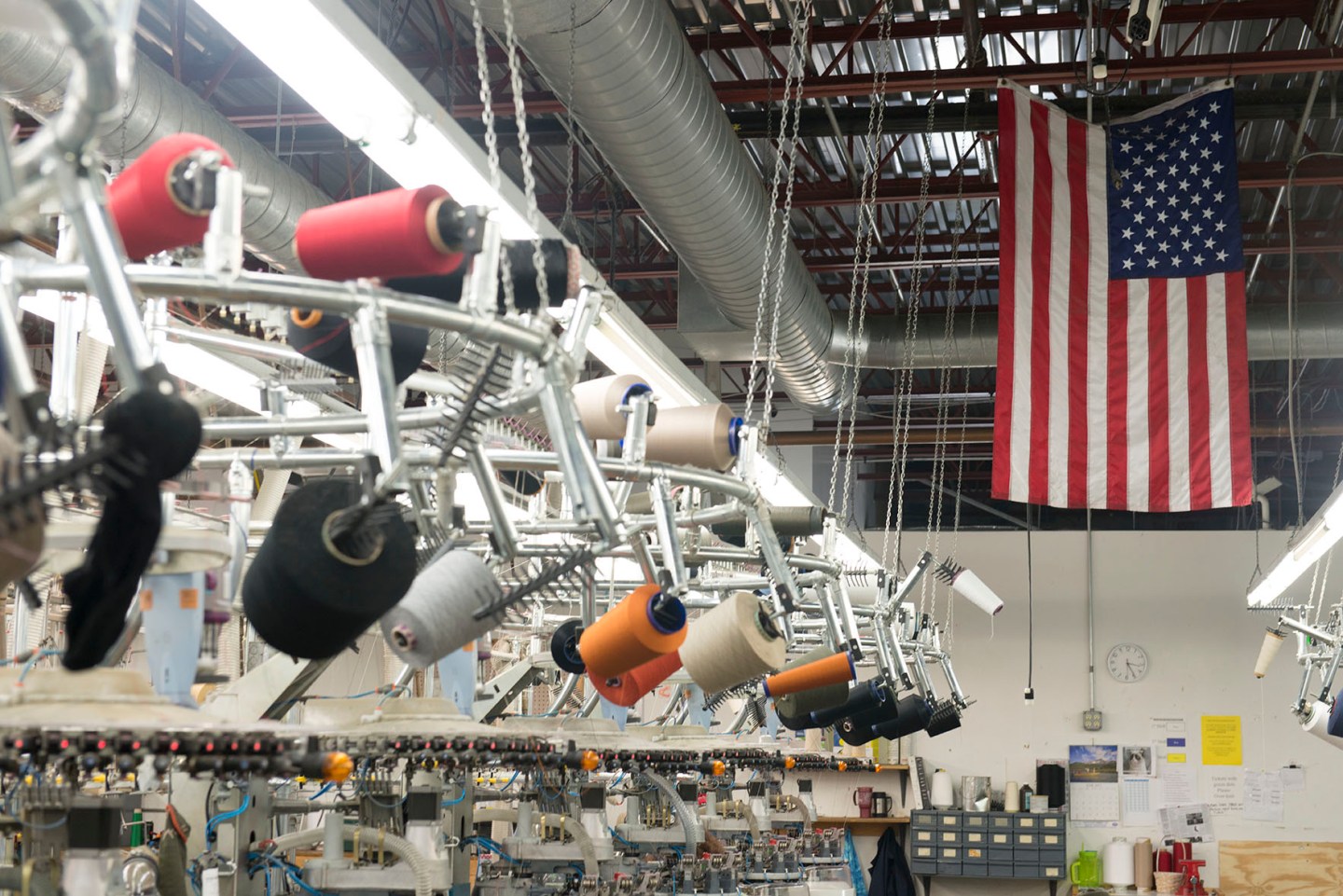 Is Made in America just marketing spin? When Fortune set out to find companies that are diehard American, we expected a challenge since businesses today, large and small, stay competitive by relying heavily on the global marketplace for services, suppliers, and skilled labor. As we began digging, a number of companies were quickly ruled out because their global conglomerate parents had absorbed some operations post-acquisition — for example, Ben & Jerry’s by Unilever and Burt’s Bees by Clorox. Our guidelines: identify consumer products whose operations, manufacturing, and workforce are located entirely within the United States. Here are 13 companies that have remained, mostly, made in America.

A factory worker installs rivets into the roof of an Airstream Inc. RV travel trailer on the production line at the company's assembly plant in Jackson Center, Ohio, U.S., on Wednesday, Sept. 25, 2013. The Institute for Supply Management (ISM) is scheduled to release manufacturing data on Oct. 1.

Airstream’s iconic silver bullet-shaped campers have been used for everything from transporting astronauts and celebrities to housing roadside shops. Founder Wally Byam built the first Airstream trailer in 1929, which was a tent on top of a Model T chassis.  Thor Industries, which purchased the company in 1980, is one of the largest producers of recreational vehicles (it has eight subsidiaries including two in Canada). All of Airstream’s iconic silver trailers are manufactured in its Ohio factories, but according to a Thor spokesperson, materials are sourced globally.

A maker of men’s dress shoes that has shod Presidents such as Bill Clinton and Ronald Reagan was founded in 1922 and later supplied shoes for the Army and Navy during World War II. The company is owned by private equity firm Brentwood Associates and operates company-owned retail shops in Europe and the U.S. Most (95%) of its shoes are manufactured in America, but its slip-ons are hand sewn in the Dominican Republic.

Though its Canadian-born founder, the scandal-prone Dov Charney, is in the midst of reclaiming control of the company, the casual wear retailer remains devoutly American, with nearly all of its garments produced in U.S. Charney founded American Apparel in Los Angeles in 1998 and helped turned it into a pop culture phenomenon sold in 20 countries.

This image provided by Benjamin Moore shows a fan deck of paint colors that consumers can look through at a hardware store to help them decide what color paint to buy. Often people say they want to paint a wall white because they don’t want strong colors in their home, but as it turns out, there are dozens of whites to choose from in ever-so-slightly different hues, making the question of “Which white?” a difficult one.

A Berkshire Hathaway subsidiary since 2000, the 131-year old Benjamin Moore still produces all of its paints in plants in Texas, New Jersey, and Colorado. The two hundred employees who work abroad are part of Benjamin Moore’s international distribution chain.

Agro-Farma Inc. employees prepare to ship cases of yogurt at a facility in New Berlin, New York, U.S., on Tuesday, Jan. 31, 2012. Agro-Farma Inc. manufactures dairy products, including nonfat and low fat yogurt in various flavors, and offers its products through stores in the U.S., Canada, and Australia.

One of the leading outdoor sock brands in the U.S. was founded in 2004 and has experienced double-digit growth for the past decade—last year it grew 82 percent—and employs 148 workers in a town of 2,000 people in rural Vermont. Mark Comcowich, director of sales and marketing, explains “There is a sign in the mill which says ‘no one ever outsourced anything for quality. Still made in Vermont, U.S.A.’” Its socks are backed with an unconditional lifetime warranty.

In April 2012, Jake Bronstein created a Kickstarter campaign to finance a men’s underwear company that would use American grown cotton and produce goods in American factories. He originally asked for $30,000 but raised nearly 10x that amount. Today Flint and Tinder commissions five American factories to manufacture its line of clothing, which now includes hoodies, tops, bottoms, and women’s underwear. According to the company, half of materials are sourced from within the U.S, but its woven fabrics are from Brazil, Japan, and Italy.

When Anthony Maglica came to America in 1950 from Croatia he didn’t speak English. But that didn’t stop him from opening a machine shop in his garage and designing precision parts for the military. In 1979, he designed the first Maglite, which spawned a company that today sells more than 10 million flashlights each year.

A furniture and home decor retailer, the 12-store Room & Board collaborates with small family-owned furniture manufacturers from across America. The company says 90% of its stock—handcrafted beds, tables, bookracks, drawers, wall shelves, sofas, draperies, and lighting products—is made in the U.S. and claims to have no overseas outsourcing or employees. According to a spokesperson: “We keep raw material local as well. The wood, steel, granite—all the natural materials we use—are from here in the U.S.” The exceptions? Rugs are imported from India and some lighting comes from Italy.

This photo taken Sept. 29, 2009 shows Wilson Montes sorting through large pieces of leather that will be sewn into leather jackets at the Schott factory in Elizabeth, N.J.

The black leather Schott Perfecto biker jacket, an icon of American cool, was made famous by Marlon Brando in The Wild One, and quickly became a classic. Founded in 1913, Schott manufactured the first motorcycle jacket in the U.S. and supplied “rugged and warm” coats to the U.S. Army during World War II.  In recent years, the company has expanded its line to include sportswear and outwear made overseas, but Schott’s leather jackets continue to be manufactured entirely in New Jersey.

A confectionery founded by the See family in 1921, its first shop was designed to resemble Mary See's kitchen. At the time of the Great Depression, See's had 30 locations and by the ‘50s, its boxed chocolates were being sold at shopping mall kiosks. In 1972, the company was sold to Warren Buffett’s Berkshire Hathaway and remains a wholly-owned subsidiary.  Today, all of its candies and chocolates are still entirely made in the United States with 99% of raw ingredients sourced domestically. It also has licensed shops in Hong Kong, Taiwan, Japan, and Macau.

In 1943, Westye F. Bakke built a freezer in his basement in Madison, Wisconsin. Two years later he founded a home refrigeration company and helped to revolutionize kitchens across America. Sixty years later Sub-Zero is the luxe name for metallic chic.  Nearly all of its products are manufactured in the U.S. with roughly 70% of materials sourced domestically.

KENNEBUNK, ME: Tom's of Maine decals are seen on the deodorant assembly line in the manufacturing plant in Sanford, Maine.

Manufacturer of all natural personal care products makes toothpaste in flavors like gingermint and fennel and unscented deodorants for those with sensitive skin. Tom’s of Maine began in 1970 when Tom and Kate Chappell realized they couldn’t find organics for their family. In 2006 the company was purchased by Colgate-Palmolive for $100 million, but Tom’s remains true to its roots with 95% of products still manufactured in the U.S. In 2009, the Chappells founded the Ramblers Way Farm, a line of American-made wool products, such as sweaters and long johns.