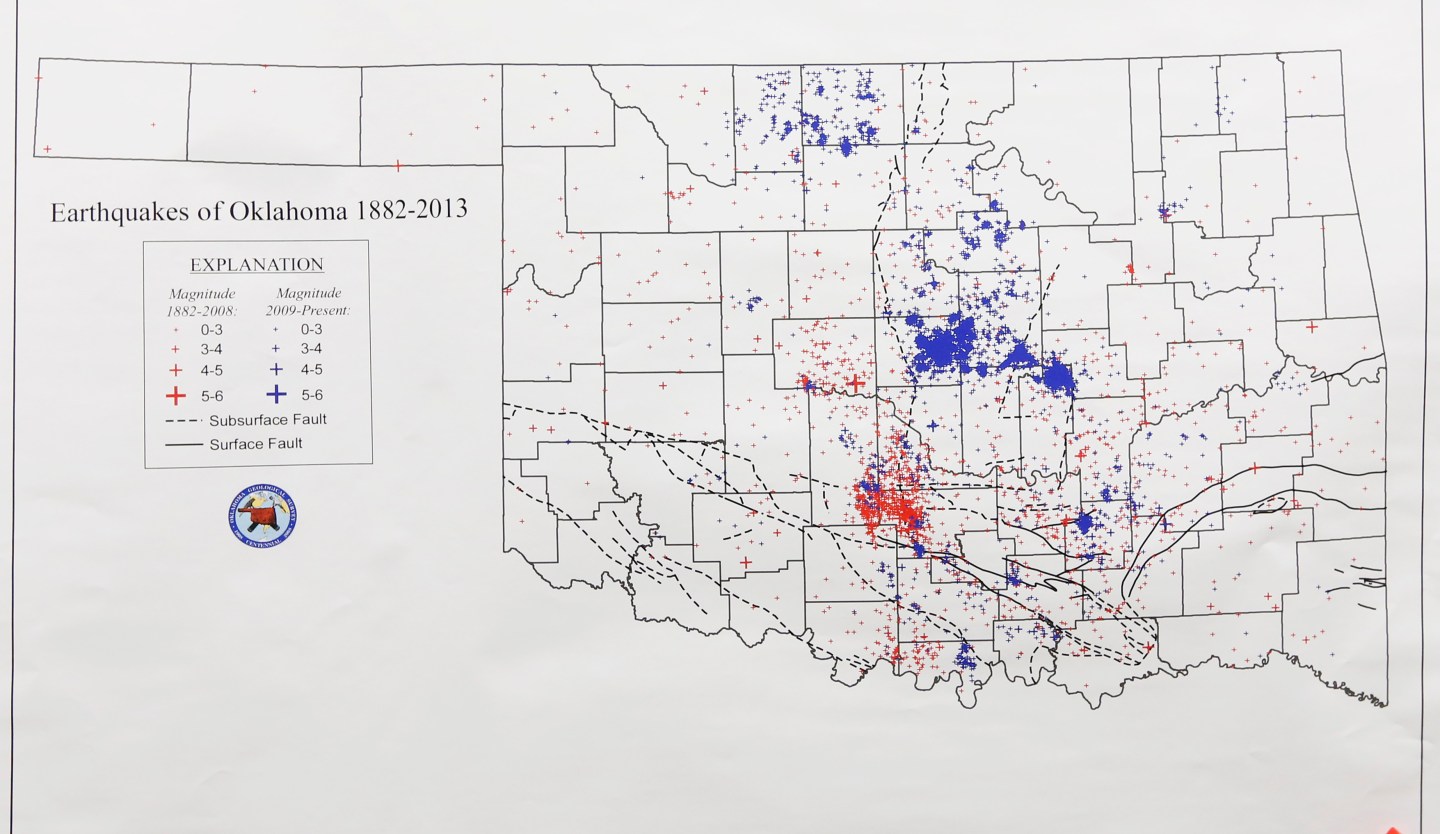 For the past several years, Oklahoma has seen an upsurge in tiny earthquakes that have rattled the nerves of residents in this normally quiet part of the country.

Some scientists have suggested the oil and gas industry’s use of injection wells to bury huge amounts of wastewater deep underground may be to blame. The wastewater results from enhanced hydrocarbon extraction operations, mostly in the search for oil; Burying the wastewater deep underground, the thinking goes, may increase the pressure on the rocks enough to cause seismic events. Now, a new study in Science released Thursday finds this may be the case.

Using seismic data and pumping rate data at the well heads, a research team at Cornell University led by Prof. Katie Keranen has concluded that four of the highest-volume disposal wells in Oklahoma are likely behind 20 percent of hundreds of quakes since 2008 east of the Rocky Mountains. Keranen and her team also found the wells could trigger quakes as far away as 30 kilometers, a much greater distance than 5 kilometer which was previously believed.

“Induced seismicity is one of the primary challenges for expanded shale gas and unconventional hydrocarbon development,” Keranen says. “Our results provide insight into the process by which earthquakes are induced and suggest that adherence to best practices may substantially reduce the risk of inducing seismicity. The best practices include avoiding wastewater disposal near major faults and the use of appropriate monitoring and mitigation strategies.”

The company that owns the wells,  Tulsa-based New Dominion, says in a statement it operates its wells saltwater disposal wells in southeast Oklahoma City safely, within permitted parameters and is fully cooperating with the Oklahoma Corporation Commission (OCC), the Oklahoma Geological Survey and other state regulators.

“While New Dominion has not had adequate time to thoroughly review the paper, an initial review reflects it is premised on certain false assumptions,” the company said in a statement in response to the study, calling the results “at best…irresponsible” and noting that the author “did not consult with NDL’s geologist and engineers to determine whether her premises are in any way correct.”

But the study provides the strongest evidence yet that the upsurge quakes in the past decade across Central and mid-America is at least partially to be blamed on humans. More than 300 earthquakes have occurred from 2010 to 2012 compared to an average rate of 21 every year from 1967 to 2000, according to the U.S. Geological Survey. Most have ranged from 2.0 to 3.6 on the Richter scale but there have been exceptions, including a 5.6 event in central Oklahoma in November 2011 that destroyed 14 homes and injured two people.

William Ellsworth, a geophysicist with the USGS, said only a tiny fraction of the upwards of tens of thousand waste water disposal wells across the country are likely behind the quakes, including those disposing of large volumes of water, deep underground and over a long period of time. The challenge, he said, is to understand better why they are so problematic.

“We would like to know more about the hydrological conditions under which injections will be performed,” said Ellsworth, whose study last year in Science examined injection earthquakes. “What we are really missing most of the time is information about the natural state of the formations before injection begins. It is very difficult to figure that out after the fact. You would like to know more about the physical state of the earth system – what are pressures, the stresses under ground? Are there faults nearby? _ before injection begins.”

A place like Oklahoma would rarely have earthquakes because it is far from active plate boundaries like those seen in California. But another of the paper’s authors, Geoffrey Abers of Cornell, said pumping wastewater as much 3 kilometers underground increases the pressure on the rocks and can weaken the faults.

“Faults that were not ready to fail in an earthquake quickly become weak enough to fail,” he said. “It is like when your car hits a big puddle and starts hydroplaning. The sudden high pressure of water between the road and the car reduces the friction.”

Though most of the earthquakes have done little damage beyond causing cracks in home foundations, Abers and his colleagues fear things could get worse. They write that these wells lie very close to what is called the Nemaha fault, which runs through Oklahoma City and is large enough to trigger a major, magnitude-7 quake.

“There are structures here that speculatively could cause larger earthquakes,” Abers said. “We would encourage evaluation of the risk of these faults.”

Abers said the policy recommendations should be left up to Oklahoma authorities, who have started to act. Oklahoma Gov. Mary Fallin last month approved new testing and monitoring rules for injection wells requiring well operators to collect data on volume and pressure daily, instead of monthly.

The OCC, which regulates the state’s oil and gas industry, said it has been in intensifying talks the past month with all companies including New Dominion which operate the deepest, Arbuckle formation wells. “We are going through all their Arbuckle formation well operations with a fine-tooth comb because those are thought to be the highest risk for seismic activity,” OCC spokesman Matt Skinner said. “Those wells are getting the closest look.”