The little Spanish soccer team that could vies for crowdfunding victory 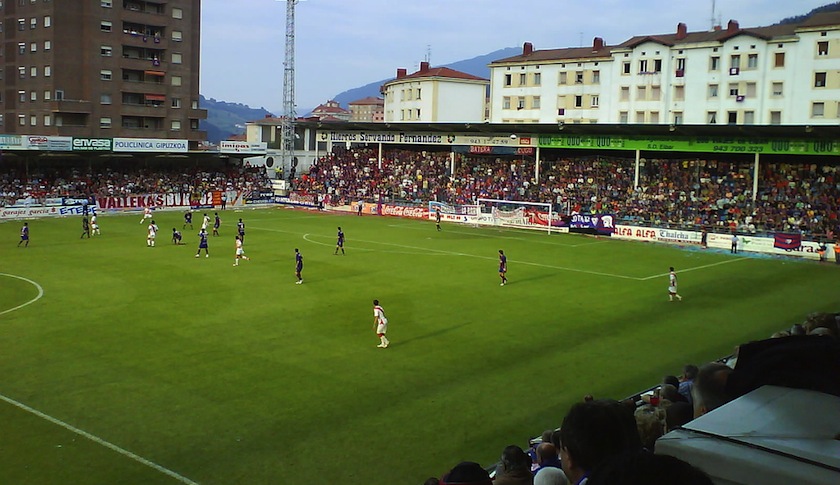 One of Alex Aranzábal’s earliest boyhood memories of his local soccer team, SD Eibar in Spain’s Basque Country, was of the home team goalie scoring with a goal kick that he managed to slam the length of the field, past the opposing goalkeeper, and into the net.

It is among the most rare goals, but in a way, its weirdness pales in comparison to SD Eibar’s current economic state.

Aranzábal, now 40, has been the president of the club since 2009. In the last two years, he has helped lead the club–long mired in the lower divisions of Spanish professional soccer–first into the second division and, after winning that league in May, into its first ever spot in Spain’s top division, La Liga.

As club president, Aranzábal, a marketing director and an economics PhD, infused the tiny club with the frugal mindset of a small business owner.

“We always had it clear that a football club has to be managed like a business, with economic rigor and seriousness,” he says. “For the sporting project to function, there first has to be a serious economic project.”

But nothing’s easy in Spanish soccer, and, in a sick twist of fate, the financially prudent SD Eibar could lose all it has achieved because of a dubious accounting rule. Although the team is carrying no debt – a true rarity in a country where 19 of the 42 teams in the top two leagues have declared bankruptcy in the last decade – it may be relegated back to the third division because its dedicated capital (the total value of its outstanding shares) is too low.

According to a law known as Real Decreto 1251/1999, when teams move up from the third to second division, they are required to have dedicated capital equivalent to 25% of the average expenses in that league. The problem is that the minimum is around 2.1 million euros these days, while SD Eibar only has 422,000 euros.

“The law is absurd. There are clubs that owe more than 100 million euros. Many. And nothing happens. And they make us raise capital,” says Aranzábal “The stock value is not what shows the strength a business has. It’s debt, it’s if it can pay its payroll and bills. This club is super clean and healthy.”

Other teams that have faced this problem have sold majority shares to businesses or rich investors or local governments. But SD Eibar is located in Basque country, a world center of worker cooperatives. And so, to raise the 1.7 million euros it needs by August 6, it launched a crowdfunding site where people can buy shares for 50 euros each (the maximum investment is 100,000 euros).

“We didn’t want to do it any old way,” says Aranzábal. “You know, with rich Arabs or Russian millionaires. What we wanted to do, inside the Eibar model, was continue to be a club of the people.”

The tale of the little team that could has struck a chord among international soccer fans, and the team has raised over 85% of its goal so far. Share purchases have come in from 37 countries; after Spain, the U.S., China, and the U.K. are home to the top buyers.

Now, SD Eibar faces another challenge: It has overcome a silly law with a capable crowdfunding drive, but can it survive in a league that notoriously rewards the rich?

That may well be the greater hurdle.

Nestled in a slender valley between the Basque cities of Bilbao and San Sebastián, where water streaming down the nearby mountainsides provided plenty of power for iron working mills, Eibar is known as the Ciudad Armera, the Arms City, because of the quantity of firearms it built for Spain during its empire. Later, during the 1936-1939 Spanish civil war, the town of 30,000 was destroyed because it was a bastion of anti-Franco Republicanism. In 1940, the town’s two bedraggled teams merged to form SD Eibar.

“The teams there had to join together because there was nothing, no resources, no money, no jerseys,” Aranzábal says.

The jerseys came from the local soccer federation, in San Sebastián, which happened to have an extra set of scarlet and blue Barcelona jerseys (the team still uses the colors). The club spent the next seven decades bouncing between regional and secondary national leagues. It produced several Spanish national team players and served as a seasoning ground for two current Spanish stars, Xabi Alonso and David Silva.

But until now, it has never played in La Liga.

The team will present an odd sight when it starts its campaign in late August. Its stadium is by far the smallest in the top league, with room for 5,000, and its entire budget last year was 3.9 million euros. (By comparison, Real Madrid star Cristiano Ronaldo’s annual salary is about $50 million and the Real Madrid stadium seats about 85,000). At 6.9 million euros, the market value of its players as measured by the website Transfer Markt is not only the smallest by miles in La Liga, it’s also the third lowest in the second division.

The team will have to renovate its roster to compete, as many of its players don’t have the skills for La Liga and at least three of those it borrowed from bigger teams are set to leave. Aranzábal says he hopes to keep between six and eight players, including three borrowed from the San Sebastián team Real Sociedad.

“We want to maintain the nucleus because one of the secrets of our success is unity in the locker room,” he says. “But we are aware that La Liga is more demanding.”

Once the season begins, Aranzábal says that SD Eibar has a characteristically prudent goal: 17th place (the last three of the 20 teams are relegated).

“We want to demonstrate that in soccer, the small club, when it handles things well, can beat the powerful,” Aranzábal says. “This year, it will be a lot more difficult. Because the differences are gigantic.”