For the airline industry, big data is cleared for take-off 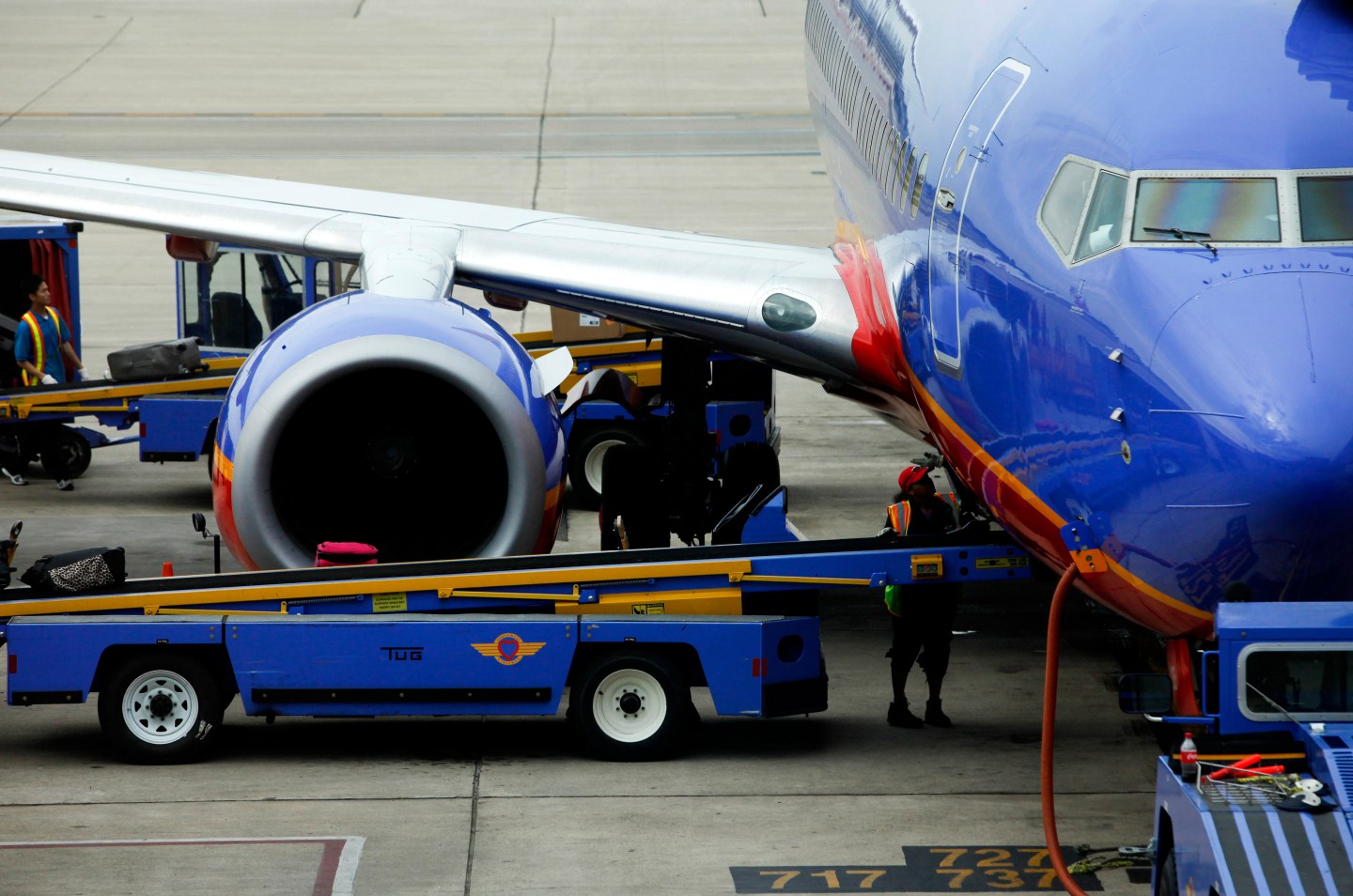 A Southwest Airlines Co. employee waits to unload baggage from a plane sitting on the tarmac at Minneapolis-St. Paul International Airport in Minneapolis, Minnesota in Sept. 2013
Patrick T. Fallon/Bloomberg—Getty Images

When a customer checks into a flight with United Airlines (UAL), there is typically an array of potential add-on offers to navigate through: flight upgrades, access to the airline’s United Club, and more.

Under United’s old “collect and analyze” approach to data, the airline would use information about customers’ choices about those items, in aggregated fashion to “see what the most successful products were, and market with those [insights] in mind,” said Scott Wilson, the company’s vice president of e-commerce and merchandising.

That approach has changed. As of the beginning of this year, “collect, detect, act” is United’s new data-focused mantra, and it’s changing the way the airline serves its customers.

“Now we look at who the customer is and his or her propensity to buy certain products,” Wilson explained. More than 150 variables about that customer—prior purchases and previous destinations among them—are now assessed in real time to determine an individual’s likely actions, rather than an aggregated group of customers.

The result, delivered in about 200 milliseconds later, is a dynamically generated offer tailored to the individual. Its terms, on-screen layout, copy, and other elements will vary based on an individual’s collected data. For United, the refined approach led to an increase in year-over-year ancillary revenue of more than 15 percent, he said.

Welcome to the big data era in the airline industry, which in many ways was one of its earliest participants.

“Airlines are awash in data, much of it unstructured,” said Bob Mann, an industry analyst with R.W. Mann & Co. But only recently have airlines been able to use big-data techniques “to solve, among other objectives, how to recognize and enhance customer value, and how to cultivate high-value customers,” he said.

“Airlines have always been very good at collecting data, but they haven’t always been good at using it,” United’s Wilson said. Now that the costs of storing and processing data have dropped—even as airlines collect more and more of it—it’s becoming easier for a company to act on it. At United, roughly a terabyte of customer data is floating around at any given time within its systems. “We don’t keep it all,” Wilson said. “We have to be selective about what we grab.” For the data that is selected, a real-time decision engine does the crunching to turn it into something useful.

It starts at the baggage carousel

One area in which the effects of big data technology are visible is in the handling of customers’ luggage. “We have over a number of years invested millions of dollars in baggage tracking,” said Paul Skrbec, a spokesman with Delta Air Lines. “That was one of those core, behind-the-scenes services for our customers.”

Millions of bags are checked each year with Delta (DAL)—a total of 130 million are projected for 2014, Skrbec said—and “every customer has had the experience of boarding a plane after checking their bag and wondering if it was there.”

Through the use of hand-held baggage scanners used at passenger check-in, “we’ve had all this tracking data available,” Skrbec said. But “one of the things we realized about two years ago is that customers would benefit from having that information.”

Which is why Delta was the first major airline to launch an application allowing customers to track their bags from their mobile devices, he said. Spanning the iOS, Google Android, BlackBerry and Windows Phone mobile operating systems, the free app has been downloaded more than 11 million times.

In search of new revenue streams

It’s a similar story at Southwest Airlines (LUV), which is using big data to determine which new customer services to implement.

“Southwest uses aggregated, anonymous customer data to promote products, services, and featured offers to customers on multiple channels, devices, and websites including Southwest.com,” said Dan Landson, a company spokesman. “By observing and looking into customer behaviors and actions online, we are better suited to offer our travelers the best rates and experiences possible. We also use this data to support the evolving relationships with our customers.”

For example, “we look at the city pairs that are being searched to help us determine what type of service we should have on a specific route,” Landson said.

The payoff? “Our customer and loyalty segments grow year-over-year,” Landson said. “We believe that intelligent, data-based targeting has a lot to do with that growth.”

The benefits of a data-focused approach may be easy to understand, but execution is another matter entirely. For most airlines, the first problem lies in “bringing together all sorts of disparate silos of passenger information—booking information from transaction systems, web and mobile behavior (including searches, visits, abandoned carts), email data, customer service info, etc.—to create a single, consolidated view of the customer,” said Allyson Pelletier, vice president of marketing with Boxever, which offers a marketing platform focused on putting big data to work for the travel industry.

“Armed with this information, and the resulting insights, they can then take specific action that helps them convert more visitors on-site, secure more revenue, or increase loyalty across any channel,” Pelletier said.

At Norwegian airline Wideroe, for example, a single customer view “enables agents in the call center to understand the full history of the customer—not just the customer service history, but also their recent visits to the website or promotional emails they’ve opened,” she explained.  “After they solve the customer service issue at hand, they’re in a powerful position to then recommend the most appropriate ancillary service—driving add-on revenue—or offer a complimentary upgrade, thereby driving loyalty.”

“One of our largest clients in Europe uses Boxever to understand abandoned carts and then trigger personalized emails to the abandoners,” she said. “They reported back subsequent bookings of $1 million per week from these communications.”

Boxever also cites a 21 percent reduction in customer-acquisition costs on paid media “by understanding who the customer was, where they came from and whether or not they were already a customer,” said Dave O’Flanagan, the company’s chief executive. “This way they could start to move those customers away from expensive acquisition channels to retention channels, like email, which is much cheaper.” There is also potential for a 17 percent uplift in conversion on ancillary cross-sells, such as adding hotel or car to a booking, he added.

Indeed, “I’ve not seen a single major airline with an integrated ‘big data’ business solution, nor an airline with a plan to integrate such a program,” said Richard Eastman, founder and president of The Eastman Group, which builds travel software.

That depends on how one defines big data, however. “The airlines will tell you they ‘have it all’ without really knowing or understanding what ‘big data’ really is,” Eastman said. “Airline managements remain so focused on selling seats with their existing inventory systems that they have ignored buyer information needs as well as the tools that would enable them to reach out to buyers and travelers to serve those needs—let alone, reach buyers at decision-making moments.”

“I think there’s still a huge unmet need in the marketing and customer experience area,” he said. “Companies like Google are trying to be the ultimate assistant with technologies like Google Now. I think there’s a huge opportunity for airlines to create a helpful travel assistant that knows what I need before I do by combining data with mobile—helping people through airports, in-destination, right throughout the whole travel journey.

“Imagine a travel application that knows where I am, that I’m traveling with my family and that the weather is bad on our beach holiday. It could start to offer alternative itineraries close by that are family-friendly and not weather-dependent. These are truly valuable things an airline could do for me if they could use big data effectively and join the dots between me, my travel experience and environmental factors affecting that.”