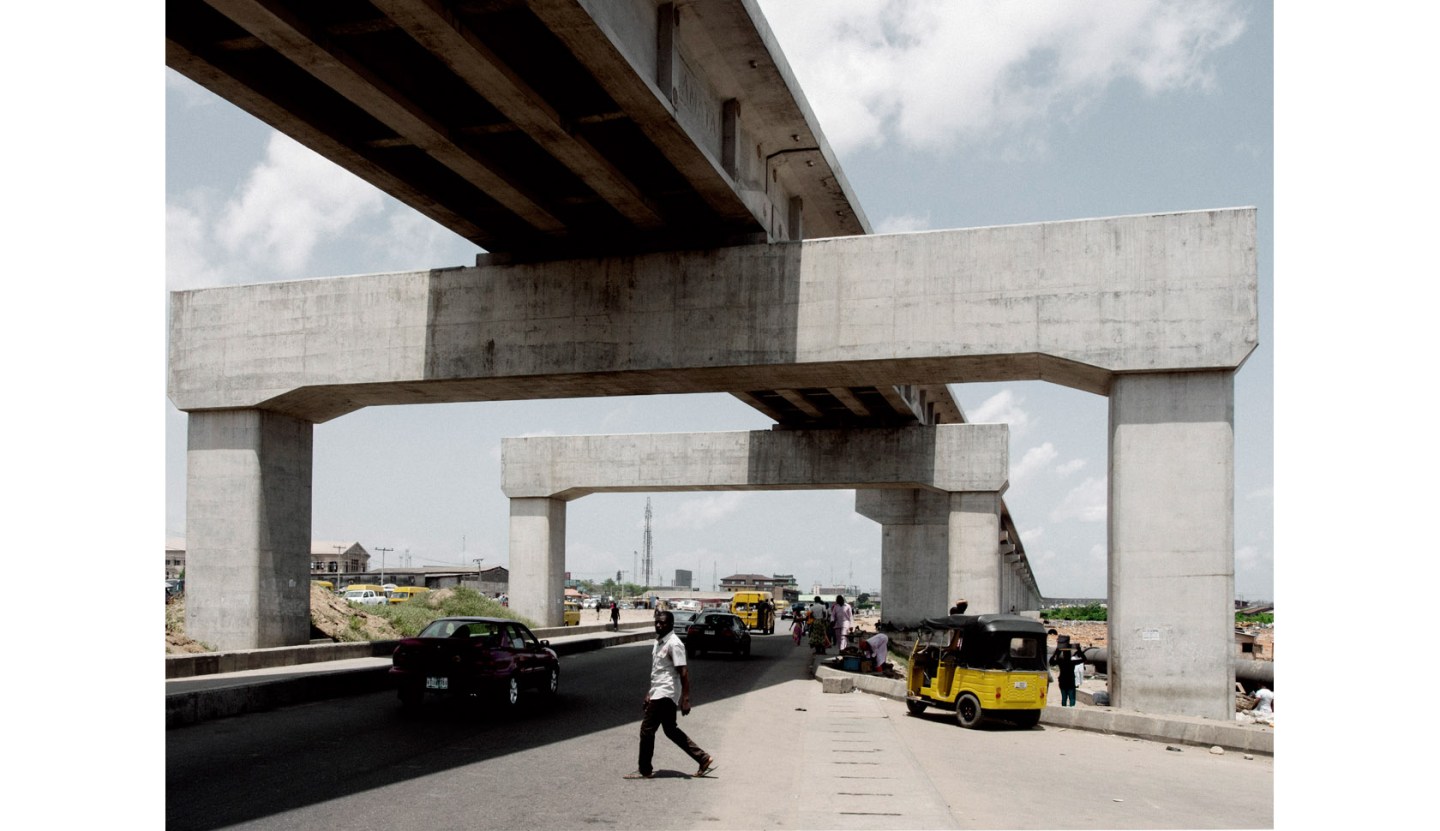 Saturday night in Africa’s biggest city, Lagos, and five of us are lip-reading across the table above the thumping music at Rhapsody’s, a restaurant-club on upscale Victoria Island. Every few minutes a waiter parades past us holding aloft a see-through ice bucket, with sparklers ablaze and a bottle of Dom Pérignon Rosé Vintage, priced at 150,000 naira (around $924)–about one-third the average Nigerian’s yearly income. “You have to let people know you’re ordering it,” says my companion, laughing. When we finally stagger outside at midnight, the valet parkers are maneuvering SUVs out of spaces, carefully avoiding the beggars on the sidewalk.

The disjuncture between the super-rich and dire poor is seen on almost every corner of this megalopolis of about 20 million. This spit of land on the Atlantic coast held just 2 million people in the 1970s. It’s now the region’s commercial powerhouse and one of the fastest-growing cities in the world. Thanks to an oil boom and an expanding economy that has made Lagos a draw for rural villagers hoping for a better life, a high birthrate–the average Nigerian woman gives birth to more than five children–and more and more returnees from the U.S. and London, the growth shows no signs of slowing. Every year about 600,000 people are added to Lagos, and the UN estimates that within a few years it could edge out Karachi to become the world’s third largest, after Tokyo and Mumbai.

Congested roads and high density hardly match the world’s vision of Africa as a place of mud-hut villages and sweeping landscapes. But increasingly this will be the real Africa. Within 20 years most Africans will live in urban areas. By 2050, Africa’s city dwellers will more than triple, from about 400 million to 1.2 billion–one of the fastest urbanizations in human history, according to a report earlier this year by the UN-Habitat. Managing that growth is a challenge the likes of which the continent has never seen–and yet Lagos offers a laboratory for Africa’s future. At stake is whether its exploding growth will widen Nigeria’s huge income gulf–about 60% of Nigerians live on less than $1.25 a day–or create more equitable ways of living. (What’s more, pockets of violent insurgency, like the Boko Haram terrorism base in the northeast that has gripped the world in recent months, are a stark reminder that Nigeria bears the scars of its conflict-ridden past.) While Lagos’s rich are getting richer, the wealth gap remains stark. In general Africa’s booming cities will hardly end poverty. The UN projects that most of Africa’s new city dwellers will probably wind up living in slums and warns, “The ability of African cities to cope with these numbers is questionable.”

Congested roads and hours-long traffic jams don’t match the image of Africa as a place of mud huts and sweeping landscapes. But increasingly this will be the real Africa. Photograph by Alex Majoli—Magnum Photos

It’s no surprise that the city is straining under the growth. Because of decades of ineffective government control, electricity is in critically short supply. Nigeria has finally opened investment to private power companies, but Lagos generates a minuscule 2,000 megawatts of electricity–less than half of what’s available for a single block in Midtown Manhattan–and every household and store depends on diesel generators. “We have about two hours, maybe, of public power a day,” says Kola Karim, 45, CEO of Nigeria’s Shoreline Energy International, an industrial conglomerate, as we sit in the dark in an upscale hotel bar waiting for a generator to kick in. “It’s unbearable,” he says.

So too for now is Lagos’s nearly paralyzed road system, which has virtually no mass transit and too few working traffic lights. One Monday afternoon an official from the Lagos Metropolitan Area Transport Authority, or Lamata, drives me around to show the anarchic traffic. We sit idling in the searing tropical heat behind a battered police car, where two cops sit in the open back doors cooling off, their machine guns pointed outward. On our left an oil truck is spewing black diesel fumes, and on our right about 20 goats bleat loudly atop a pickup truck. One of the policemen leans into the next lane and slams the butt of his rifle into the side-view mirror of a taxi, sending chunks of glass into the air. As the car behind us blares its horn, our driver finally snaps. “What?” he shrieks, swinging his head around. “You want us to fly?”

Yet there are signs that Lagos is changing fast, offering hope for what’s possible in Africa’s lightning transformation. When Lagos’s visionary governor Babatunda Fashola took power in 2010, he enforced local tax collection–an unusual idea in Africa. That has brought Lagos billions, giving it both autonomy from the country’s corrupt government in Abuja, the capital, and new projects, like a planned rapid-transit network, a $50 billion infrastructure program that includes West Africa’s first suspension bridge, and two forthcoming power plants that will finally ease the electricity shortage and even light Lagos’s streets at night.

Fashola now markets his city as “Africa’s Big Apple.” And in fact, much like New York, Lagos has a multitude of thriving industries. In April, Nigeria became Africa’s biggest economy, displacing South Africa, in part driven by growth in Lagos, with its growing film (in Lagos it’s called Nollywood) and fashion industries. There are entrepreneurs, financiers, and energy CEOs whose worth is rocketing in value on Africa’s energy boom. Lagos is also the hub of Nigeria’s banking activity, and it has retail and manufacturing operations as well. Earlier this year Nissan began rolling out Lagos-made SUVs. Lagos’s rich set is increasingly visible. Shoreline CEO Karim, to name one, keeps 36 thoroughbred Argentine horses at the Lagos Polo Club, where he entertains the city’s movers and shakers–many of them, like him, back home after years living in Los Angeles, Washington, London, and elsewhere.

If you cross the bridge from the Polo Club, you reach the dirt-poor neighborhood of Makoko on the mainland’s Lagos Lagoon. There, more than 100,000 people live in rickety dwellings on stilts that teeter over the fetid lagoon. Our canoe snakes through the sewage-filled canals until we arrive at a three-story, A-frame structure: a schoolhouse that floats atop 265 recycled-plastic drums, designed by Kunle Adeyemi, a Nigerian architect who moved back in 2011 after working in Rotterdam with the Dutch architect Rem Koolhaas and started his own Lagos firm, Nlé. The school, built for 60 students, was made to withstand floods, since it can rise with the water level. “I’m very worried about what Lagos will look like in the next decades,” Adeyemi says. “You see Lagos from the air, and it’s a sprawl with no infrastructure.” Up close, however, Lagos is much more than that. With its exploding population, plusses and minuses, and potential, it is also Africa’s future.