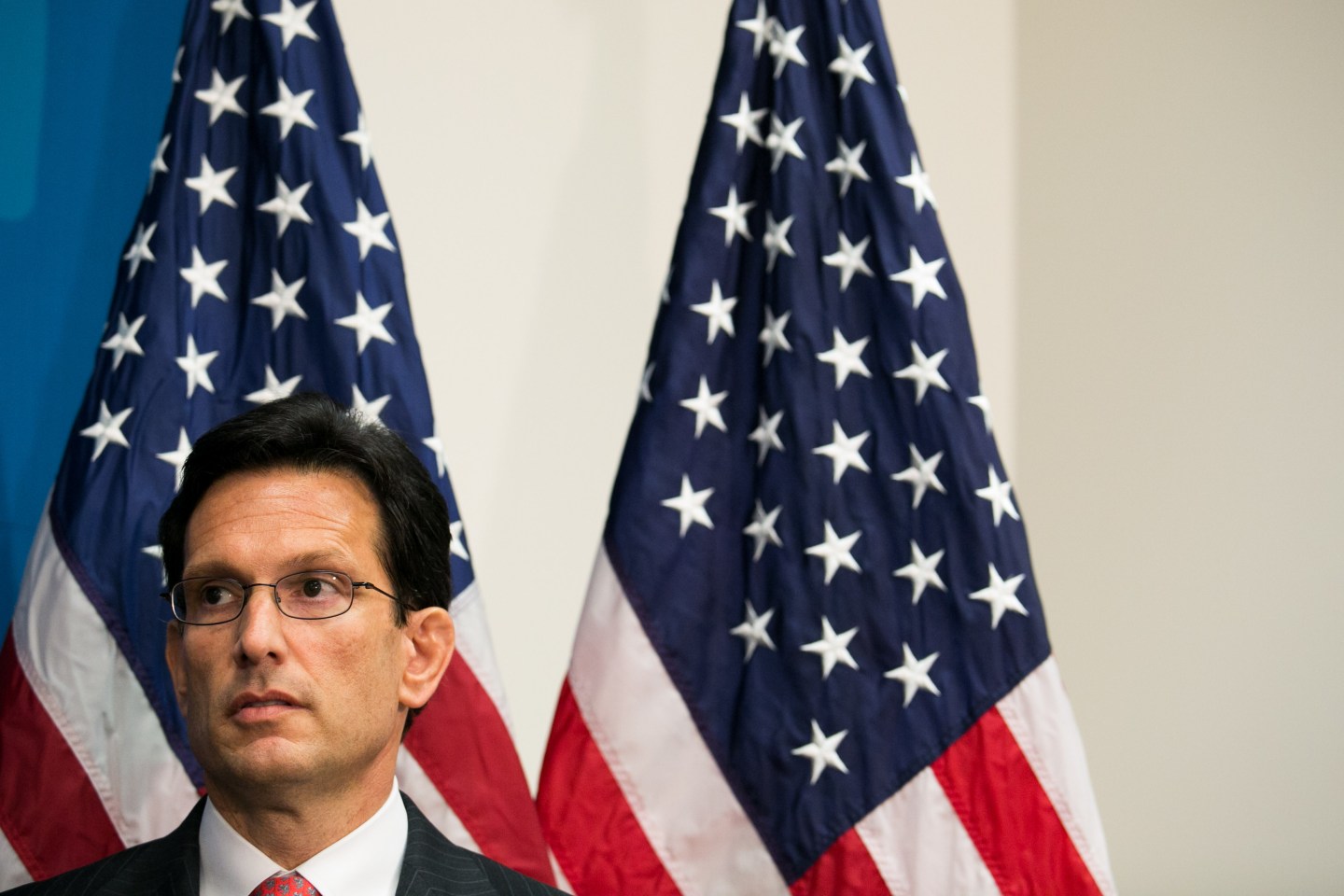 Last night was an odd one to be talking about bipartisanship in Washington. But there they were, a couple hundred of the best and brightest millenials, gathered in a basement conference room on Capitol Hill to discuss how to break dysfunction’s chokehold.

The gathering was sponsored by the Bipartisan Policy Center, the most prominent in a handful of outfits that have popped up in recent years to promote kumbaya in government. Groups encouraging cooperation evidently propagate as the spirit in Congress wastes away: The event launched a new affiliate for young people demanding less rancor from elected leaders. As they talked, one of the architects of that rancor, House Majority Leader Eric Cantor, was going down to a stunning loss at the hands of a Tea Party primary challenger who labeled him insufficiently conservative.

The upset defeat of the man widely seen as Speaker-in-waiting sent shockwaves through the political establishment and the media class. For starters, it upended this spring’s accepted narrative that the Republican establishment had finally figured out how to contain, if not outright extinguish, the four-year-old Tea Party menace. In a race that turned in part on Cantor’s perceived embrace of comprehensive immigration reform, any hope of a deal in that debate appeared to be another casualty.

But the news was slow to reach the basement. The college-student founders of the new group, Common Sense Action, were seated on stage carrying on a hopeful panel discussion about the potential for rightsizing entitlement programs and reining in student loan debt. When they wrapped up, but before the mostly college-aged audience could beat a path to the free ice cream, former Senator Bob Bennett unfolded his 6 foot 6 inch frame from his front-row seat and took the lectern.

The 80-year-old Utah Republican holds the distinction of being the first scalp the Tea Party insurgency claimed. After three terms in the Senate, Bennett finished third in a 2010 nominating convention, owing in part to anger over his support for the Wall Street bailout. Addressing the young audience in the guise of a call to action, Bennett seemed to want to impress some of his hard-won skepticism for the ability of Congress to get big things done. He’d first won his seat in 1992 pledging to tackle Social Security’s solvency, he said, and came to Washington to make it happen. Over eighteen years in the Senate, he failed to convince his colleagues that the real-world urgency of shoring up the program justified the political risk of taking on the challenge. “Every year that goes by makes it more expensive and more difficult to solve the problem,” he said. “Government is not leading, government is following — badly.”

Once the program concluded, I approached Bennett and told him that Cantor was on his way to losing his primary. Bennett’s first response (after “Wow”) was that it would be a mistake to draw too broad a conclusion from one race. That said, he added, “it inevitably will energize a lot of Tea Party people to say, ‘Well, if we can knock over Cantor, who was not known for his warm embrace of Barack Obama and his close cooperation with the administration, maybe we can knock over anybody.’ I don’t think that’s true. But they needed a victory after the defeats they’ve had. And this gives them a pretty high profile one.”

It also makes the short-term prospects of an immigration deal more remote, Bennett acknowledged. But the imperative of Republican self-preservation ultimately should work in a deal’s favor. “If the Republican Party completely abandons any attempt to deal with the immigration problem, they doom themselves to a generation in the political wilderness,” he said. The former Senator pointed to the party’s experience in California, a reliable stronghold until then-Gov. Pete Wilson demagogued immigration in his 1994 reelection bid. Now, the state “has become 53 electoral votes that are safely in the pocket of any Democratic nominee, no matter how hapless he or she may be. If you want to do that to the whole country, just keep doing this to people like Eric Cantor.”

More broadly, Bennett said the GOP risks electoral obsolescence if it keeps embracing conservative purifiers — the same way Democrats did back in the 1970s. “The Tea Party will do to the Republican party what the McGovernites did to the Democratic Party,” he said, referring to the liberal acolytes of George McGovern, the 1972 Democratic presidential nominee who was trounced by Nixon. “Once the McGovernites took control, the Democrats lost five out of the next six presidential elections,” Bennett said. “I see the same thing for the Republican Party. It does very seriously put the Republicans in the position that they will have to depend on a complete Democratic meltdown in order to win.”