20 make-believe companies that changed the world 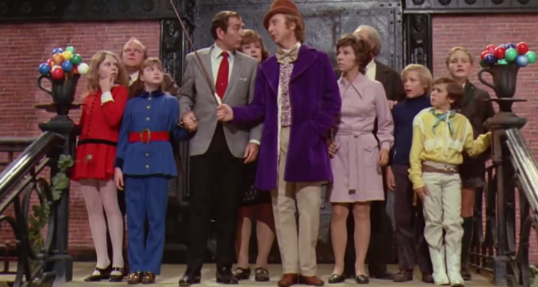 Some well-known companies do business strictly on the page, or on the screen.  Our favorites:

The chocolate company and its mouth-watering treats sweeten children’s moods and bloat their bellies worldwide, while also saving the majority of Loompaland’s population from ruin. Take that, Arthur Slugworth.

Elias-Clarke publishes the magazine that’s absolutely everything to the fashion industry. Runway dictates the season’s trends, making or breaking designers’ careers and creating millions of dollars and countless jobs—through, say, a cerulean Oscar de la Renta dress featured in 2002. The color’s popularity took off and, years later, sweaters of the same color were sold to the masses at a “tragic Casual Corner.”

This hardware/sabotage supply company purports to assist a coyote in pursuit of a road runner. Acme’s products tend to be failure prone, however. An account of these failures may found in a legal complaint, written by Ian Frazier and published in The New Yorker, titled Coyote v. Acme.

Company: Burns Industries
From: The Simpsons

Charles Montgomery Burns owns the Springfield Nuclear Power Plant, as well as over a dozen other ventures in the city. In Springfield, his wealth is unparalleled.

The family-owned business, based in Bedford Falls, provides poorer townspeople with affordable housing in Bailey Park. When a financial mishap threatens to shut down the firm, some divine intervention keeps owner George Bailey from going off the deep end. It’s hard to deny the company’s significance when God and angel-to-be Clarence are on its side.

After inhering the defense contractor—listed on the NYSE—from his father, CEO Tony Stark pivots its business model to build suits or armor. They are used to fight international (and extraterrestrial) terrorists.

The billionaire founder of Warbucks Industries made his money through defense contracts. He has friends in high places—like the White House—but the world that Oliver Warbucks changes most is that of a little redheaded girl, saving her and her parentless friends from their evil orphanage warden.

Company: Spacely Sprockets
From: The Jetsons

The high-tech equipment manufacturer keeps Orbit City’s robot population up and running, though not without challenges. Competitor Cogswell Cogs, located on a nearby asteroid, constantly threatens to steal market share from Spacely Sprockets.

The conglomerate sells absolutely everything: Its two million wholly owned subsidiaries include “every conceivable field,” from yogurt to aerospace.  It changes the world by covering it with garbage—then ships all humans to a space station where their bone density decreases almost as quickly as their body fat increases.

ISIS’s relatively incompetent team of agents fights global espionage until the U.S. government disbands the agency. So, naturally, they form a drug cartel.

Though it’s publicly known as a pharmaceutical company, Umbrella Corporation secretly develops bio-weapons. The T-Virus, one of its creations, kills the host and turns it into a flesh-hungry zombie. It creates a global pandemic that turns much of the world’s population into killing machines.

Runners up: Cyberdyne Systems from Terminator; LexCorp from SpiderMan

Corporate raider Gordon Gekko’s motto “Greed is good” helps him build his fortune, destroying plenty of companies in the process—until a protégé’s ethics derail Gekko’s attempts to buy a massive airline company, leading to insider trading charges and a stint in jail.

One of the wizarding world’s safest locations, Gringotts houses many non-Muggles’ most valuable possessions. Run by goblins, the bank manages to protect its assets from Voldermort’s forces during the evil wizard’s second coming.

InGen’s research helped clone once-extinct animals—like dinosaurs. The creatures live within secure borders in Jurassic Park on Isla Nublar. When a corporate rival infiltrates the system, the security shuts down and the dinosaurs run free.

SPECTRE, led by supervillain Ernst Stavro Blofeld, attempts to use stolen atomic bombs and space vessels to blackmail governments. It has not yet gotten the better of Royal Navy Commander James Bond, CMG, RNVR.

Founded by villainous Dr. Evil, Virtucon focuses on world domination.  Dr. Evil gives little thought to financials, preferring   initiatives like creating sharks with laser beams on their heads and turning the moon into a death star.

The space technology company specializes in “Building Better Worlds,” often at the expense of human lives. It orders its employees to attempt to obtain living examples of the deadly Xenomorph species—extraterrestrial creatures that need hosts to survive. Warrant Officer Ellen Ripley, aboard the USCSS Nostromo, finds one.

Perhaps the world’s worst airline, Oceanic has been crashing planes since 1965 (Flipper’s season 2). Many of its passengers have died or found themselves stranded on a deserted island.

Historically, the company derived its energy from scaring small children. But a young girl helps two employees realize that laughter is a more powerful source and Monsters, Inc., changes its business strategy.

The largest non-governmental agency in space monopolizes import and export rights at Pandora, a moon with abundant woodlands  populated by the humanoid Na’vi. RDA’s plans to mine the planet for unobtanium threatens to harm that world’s environment and leads to a war with the globe’s natives.