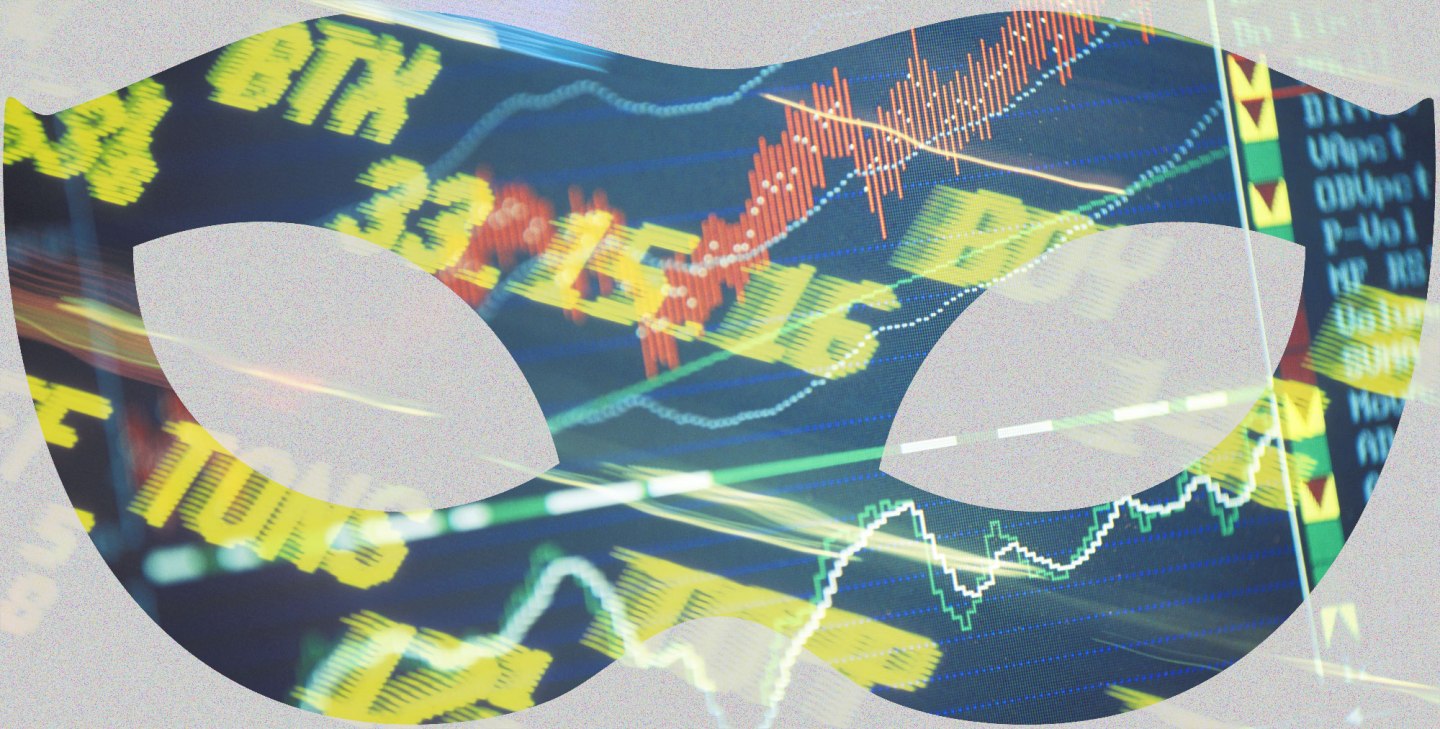 David Whitcomb answers his phone with a chipper hello. He’s been waiting for my call, or pretty much anyone else’s.

Whitcomb, a mild-mannered, slightly high-pitched 73-year old former finance professor, is quite possibly the father of high frequency trading, the lightening quick buying and selling of stocks that has been vilified in the recent Michael Lewis book Flash Boys.

The book sparked a pitched public debate — complete with a 60 Minutes segment with Lewis and daily coverage on CNBC — about whether high frequency trading was good for the market or if regular investors were being systematically ripped off. Lewis had come to the latter conclusion.

Others aren’t so sure. Arthur Levitt, the former SEC chair known for protecting individual investors, has been a consultant to a major HFT firm for a few years. He said there’s no evidence that the practice leaves average investors worse off. Last week, Securities and Exchange Commission chair Mary Jo White said regulators are looking closely at the issue. And the SEC is reportedly investigating a number of venues favored by HFT traders. But White also said she believed HFT has lowered the cost of trading for most individuals. The market, she said, was not rigged.

I had my doubts about the dangers of HFT as well. I started writing about and investigating HFT a few years ago, when I first heard the terms co-location and dark pools, two tools of the HFT trade. It all seemed sketchy and mildly unfair to the average investor, but I could never pinpoint how HFT caused any harm.

Shortly after the Lewis book came out, I started to look into how HFT got started. I figured finding the founder of the practice might shed some light on the motives of those who practiced it. My search led me to Whitcomb as the most likely father of the practice.

When I finally reach him, Whitcomb is happy to talk, and he isn’t shy about his legacy. He says he hasn’t read Lewis’ book. He sold his firm, Automated Trading Desk, and left it a few years ago. He’s no longer involved with HFT.

What he really wants to talk about is tennis racquets. That’s what he is working on these days. He’s developing a racquet with a much larger “sweet spot”–the part of the strings that gives the ball the most power and accuracy. He has a prototype, but its 2 ounces heavier than Whitcomb thinks it needs to be. A 10-ounce prototype should be ready later this month. He’s also working on a high-tech putter.

On HFT, Whitcomb had this to say: “The ability to trade electronically has dramatically reduced the cost of trading for everyone,” says Whitcomb.”I never saw any evidence of abuse.”

For a long time, Whitcomb was considered one of the leading academic experts in the structure of the stock market, back when the market was largely a chaotic hustle of hand gestures on the floor of the New York Stock Exchange. He joined the faculty at Rutgers in New Jersey in 1975 and stayed on as a professor until 1999. During that time, he was regularly tapped by the SEC to consult on market issues and gave speeches at conferences. In 1988, he founded ATD, which grew to 110 employees, handling more than 200 million shares a day by 2007. That year, he sold the firm to Citigroup (C).

After that, Whitcomb vanished, at least from Wall Street. He surfaced briefly in 2012 as the lead plaintiff in a class action suit against Citi, saying the bank had concealed from him and other shareholders the toxic assets that had nearly caused the bank to go under. Citi settled the lawsuit for $600 million. Whitcomb released a statement that he was pleased and went silent again. His lawyers for the suit did not return calls seeking comment.

I’m not the first to try to nail down the origins of HFT. The world of high frequency trading is made up of a mix of small, secretive firms and the world’s largest banks–Goldman Sachs (GS), Credit Suisse (CS), and Bank of America (BAC). None of them like to talk about HFT. A few years ago, CNBC listed a number of people who were major players in high frequency trading. Whitcomb is on the list, but so are a number of others, including Dave Cummings, the former options traded who started electronic stock exchange BATS, which is one of the major villains of Flash Boys.

David Whitcomb is barely mentioned in Dark Pools, Scott Patterson’s book on the pioneers of HFT, which came out in early 2012. Haim Bodek, a former Goldman Sachs trader who was prominently featured in Dark Pools, says Whitcomb’s ATD was never really a HFT firm, which typically try to make money by trading faster and ahead of other investors. That’s the type of HFT firm that Lewis wrote about, and the type that Bodek used to run and is now a critic of.

Instead, Bodek says ATD was more like a traditional market making firm, the kind that have always been part of the stock market, facilitating the buying and selling of stocks for others. A Citi spokesperson says ATD is not a high frequency trading firm and never was.

Whitcomb’s LinkedIn profile lists him as the current CEO of Revolutionary Tennis Innovations, which doesn’t have its own website.

Our conversation began with tennis. He doesn’t play much, but he has a court on his estate in Hawaii’s Big Island. (Along with the Hawaii estate, Whitcomb travels regularly around the world, and, at least he hopes, beyond. He’s bought two tickets on Virgin Galactic, for him and his wife.) He got the idea for the super racquet from a friend, a theoretical physicist. The idea is similar to what Prince did nearly 50 years ago, when it introduced a racquet with an oversized head. Whitcomb says his racquet, which is nearly a rectangle with curved corners, has a sweet spot that is four times as large as existing racquets. Just get the ball to touch the strings and you are good.

When it comes to high-frequency trading, Whitcomb isn’t bashful. “Automated trading desk was the first of the high frequency trading firms,” says Whitcomb. He’s looking to get credit. Last year, for a “where are they now” segment of Babson University’s alumni magazine, Whitcomb e-mailed in that he had founded a firm that was the “pioneer of high frequency stock trading.”

Whitcomb says the origins of HFT date back to the Black Monday stock market crash of 1987. Watching the sell off, he says he was surprised at how useless human market makers were during a panic. No one knew where the bottom was. Whitcomb was convinced that computers could do a better job of figuring out how low the market needed to go before people would start buying again.

So he set out along with some computer engineers to develop the first programs that would allow computers to trade on their own. And that’s what led him to HFT. By the fall of 1990, he had developed the first computer system that could continuously trade stocks on its own at a rate faster than any human. He tried to peddle the technology to big banks and trading firms. But when no one was interested, he launched ATD.

Whitcomb says ATD, at least while he was there, always had a HFT division that traded stocks for the firm’s own account, and not on behalf of customers. He says he just wasn’t very public about it. He says he didn’t want to scare off the firm’s brokerage clients, who might be concerned about a conflict of interest. So ATD got a reputation as just a market maker, which worked for the firm.

Whitcomb says ATD began co-locating its computers, another controversial HFT practice, at the New York Stock Exchange back in 2001. He says it dramatically increased the profits of the firm, but the faster access came with risks. And that’s how things are supposed to work on Wall Street. Take more risk and you will make more money, at times. Whitcomb says a computer trading error that lasted 52 seconds cost ATD millions of dollars in 2003. The market never found out about it. But had it gone on for another 20 seconds, ATD would have been out of business.

What’s more, he said by the time he left the business, nearly everyone was using some sort of HFT technology, or had access to it. ATD was selling its services to a number of institutional investors. These days, Whitcomb says, anyone who wants access to the same technology can get it. So he says he doesn’t understand those who complain about an uneven playing field in the market. And average individual investors are unaffected by HFT. Their orders are too small to spark the interest of the traders, who only make fractions of pennies on every stock they trade.

Whitcomb acknowledges that things may have changed since he left Wall Street, but he says he never saw any evidence of that HFT had any effect on stock prices in his time at ATD and doesn’t know why that would have changed. “The ability to trade electronically has dramatically reduced the cost of trading for everyone,” says Whitcomb.”I just can’t see how anyone who does Warren Buffett-like buy and hold investing would be disadvantaged by the existence of high frequency traders. If anything, they have benefitted.”