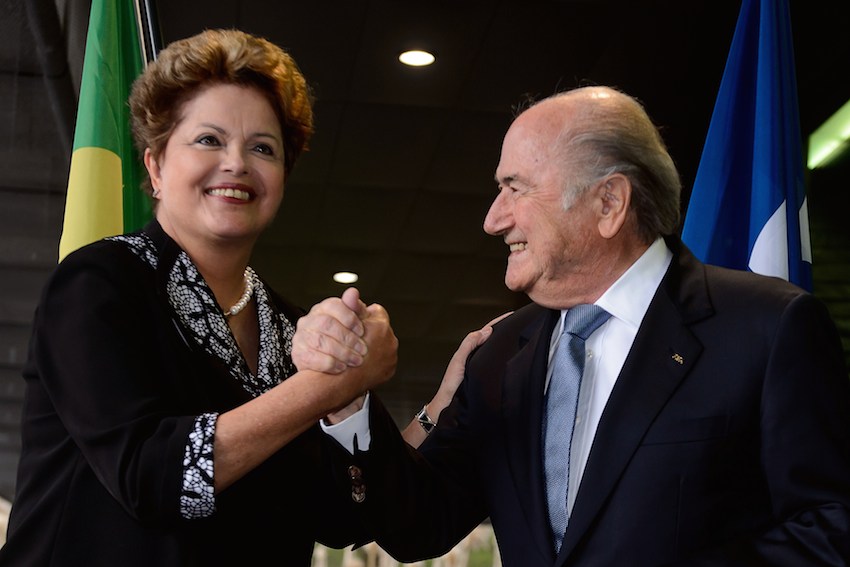 In a mid-May meeting with sports journalists, Brazilian President Dilma Rousseff used a local metaphor to say that once the World Cup began, Brazilians would forget their worries. “Once the jaguar drinks the water,” she said, “this country will go crazy.”

That Dilma (as she is known) hopes that the local populace will get swept up in the spectacle is understandable, considering the protests she’s endured over her government’s spending on the event.

At the opening ceremony for the Confederations Cup soccer tournament in Brasilia last June, Dilma and Sepp Blatter, the president of FIFA, which runs the World Cup, were booed by protesters demanding better education, healthcare, and transportation.

This May, demonstrators angry that the country was spending money on new stadiums — whose estimated costs have risen by half since 2010, to $3.5 billion — instead of low-income housing held another wave of protests in 18 Brazilian cities. Some held banners saying, “FIFA go home.”

Polls taken by the Folha de São Paulo show that support for the World Cup has fallen from 79% in 2008 to 48% today.

Even Brazilian soccer star Pele has begun to complain.

“It’s clear that, politically speaking, the money spent to build the stadiums was a lot,” he said recently in Mexico City. “Some of this money could have been invested in schools, in hospitals.”

If history is any guide, Dilma will get her wish and public discontent will turn into happiness once the first game starts. But that euphoria will pass. And it won’t answer whether spending billions to host a World Cup makes economic sense, especially for a developing country in dire need of basic improvements.

Like Brazil, South Africa built and upgraded several stadiums (10 in its case, compared to Brazil’s 12). And, as in Brazil, several were located in cities with no major professional teams to take them on after the Cup.

Patrick Bond, a professor at the University of KwaZulu-Natal’s School of Built Environment and Development Studies in South Africa, estimates that the country spent about $2.5 billion on stadiums that, because they are underused, require some $18-24 million in annual maintenance and operation subsidies.

In response to this ‘white elephant’ problem, a South African union proposed turning one unprofitable stadium into low-income housing, while in the Brazilian city of Manaus, a judge has suggested converting a new local stadium into a prison after the tournament.

Still, there are some clear benefits to holding a World Cup. In a recent study titled, “The private benefit of public funding,” University of Michigan sport management professor Stefan Szymanskiand co-author Bastien Drut found that soccer teams in countries that hosted World Cups saw an increase in attendance of 15-25% in the five years afterwards; the authors estimated that clubs in Brazil would see increased revenues of at least $182 million in the five seasons after the 2014 games.

In another recent report titled “If you host it, where will they come from?” Szymanski and his co-authors found that the 2010 World Cup in South Africa attracted a little over 200,000 extra visitors from non-neighboring countries during the tournament, and almost 500,000 during the year, increases of 8.1% and 18.7% respectively.

There are benefits on an individual scale as well. In a post-World Cup report, the South African government claimed that stadium construction created 66,000 jobs that generated over $900 million in wages.

But for those who question the stadium booms, the issue is not the spending, but what it buys.

“Who knows what the figures really were,” says Bond. “What was the value of the land? And what are the opportunity costs? Let’s say we spent that money on housing. We would probably have many fewer riots.”

Bond says that, had his country been content with having fewer new stadiums in fewer cities, it could have created “a more African-scaled World Cup rather than the most profitable World Cup with the richest taking and the most glorious stadiums.”

Szymanski says that the real problem is the way in which the World Cup is conceived as a luxury event for visitors.

“The World Cup is not about going to a stadium to watch. It’s a global television spectacle,” he says. “Instead of putting on the most lavish World Cup you could imagine in up-to-date stadiums with huge pieces of infrastructure that have no plausible long-term value to the nation, you need to say we’re going to award it to a country that deserves to host it and we’re not going to require it to invest. The broadcast rights would still be worth a lot of money and sponsors would still pay.”

For now, it seems unlikely that FIFA will turn its back on the most extravagant bids in order to offer the World Cup to the country that’s done the most to promote the sport. Until it does, the song will remain the same.

“Pretty much every World Cup and Olympics fits into the same story: An initial outpouring of popular support when you win the event. Then huge concerns of meeting deadlines and huge escalations of costs. Then the event happens and it’s a great success and people love it,” says Szymanski. “Then a few years later, people say, ‘What did we get for this?’”