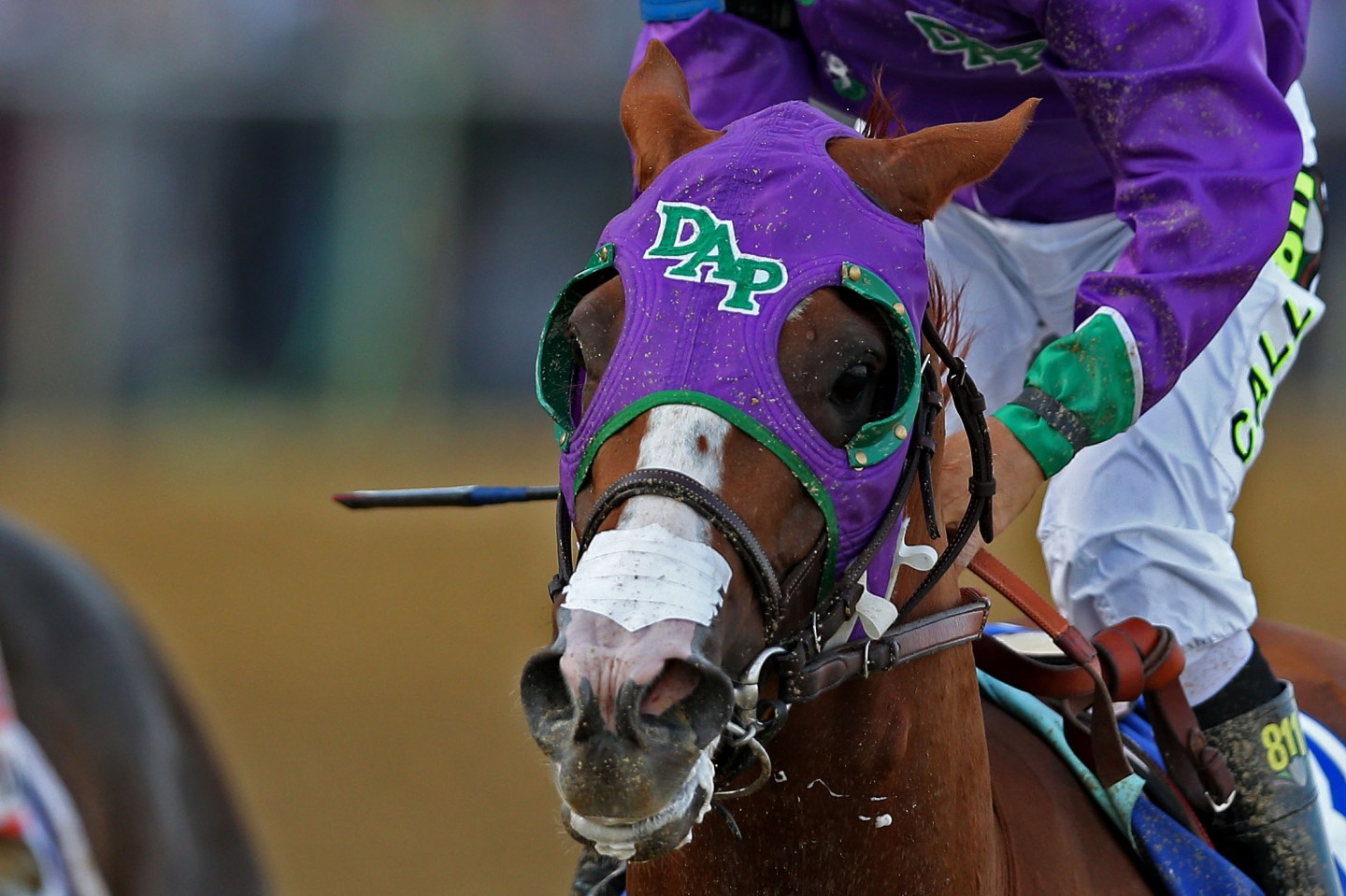 California Chrome is trying to become the first the first horse to capture the elusive Triple Crown since Affirmed in 1978.
Matthew Stockman / Getty

Horse racing fans around the U.S. can breathe easier — and so can California Chrome, the winner of the first two legs of the Triple Crown. The reason: The colt has been approved to wear nasal strips at the Belmont Stakes on June 7 after sporting them to victory at the Kentucky Derby and Preakness Stakes.

It’s a marketing dream come true for Flair, the only manufacturer of nasal strips for horses. The tiny company is hoping to turn success on the horse track into extra sales.

California Chrome is trying to become the first horse to capture the elusive Triple Crown since Affirmed in 1978. Only 11 other horses in have successfully done so.

Use of $10 adhesive nasal strips in racing is, in fact, controversial. They make it easier for horses to breath by reducing “airway resistance and providing improved airflow when your horse needs oxygen most,” according to Flair. No chemicals are involved. Rather, the strips stretch nasal passages open for more air  — at least in theory.

Any equipment worn by a horse or its jockey must be approved by racing stewards. But Belmont Park’s rulebook makes no mention of nasal strips. Scott E. Palmer, equine medical director for the New York State Gaming Commission, investigated the matter for the New York Racing Association, and found that the strips offer no advantage. Any ban against them should be lifted, he said.

“I recommend that the stewards at state-based thoroughbred racetracks discontinue their ban on equine nasal strips,” Palmer wrote in a letter to the racing association. “Equine nasal strips do not enhance equine performance nor do they pose a risk to equine health or safety and as such do not need to be regulated.”

Edward L. Blach, a co-inventor of Flair’s strips and an equine veterinarian, said his company has been growing rapidly over the last several years. Having a Triple Crown contender wear his company’s product could accelerate that growth. “Obviously, this should be helpful as well,” he said.

His company’s link to California Chrome is totally by coincidence. The horse’s owners or trainers started using nasal strips independently. Flair said it has no business ties with California Chrome’s owners nor does it sponsor their horse in any way.

Blach was inspired to create Flair, in part, by Breathe Right, a nasal strip for humans by GlaxoSmithKline. They’re a familiar sight on the noses of NFL players. Why not horses too? In addition to horse racing, the strips are used in other equine sports including polo and barrel racing.

Breathe Right is also making the most of California’s Chrome success. In fact, the company announced an official partnership with the colt on Thursday and it will set up shop at the racetrack to hand out over 50,000 nasal strips as a marketing gimmick. Breathe Right also plans to ask that fans wear them during the races and post photos to social media.

According to William Shanklin, a former professor, marketing executive and horse racing aficionado, California Chrome may lift Flair’s profile for use by horses and nasal strips usage in general. “If I was looking at it from a marketing and sales standpoint, I’d be delighted by it. We’re taking about a company we wouldn’t have heard about otherwise.”

He added, “I actually think that it could have an effect on human nasal strips.” Novices to horse racing might watch California Chrome’s success and buy Breathe Right for themselves as a result, said Shanklin.

Businesses beyond nasal strip makers are benefiting from the Triple Crown run. The potential for a horse to sweep all three races after a more than three-decade gap is sure to increase interest in the race. That may have played a role in the stewards approving nasal strips for the Belmont Stakes, Shanklin said. “There was a lot of pressure on the powers that be,” Shanklin said. “If you don’t have California Chrome, you’ll have 30,000 fewer people, the betting won’t be as robust and the television ratings will be down.”

California Chrome’s use of nasal strips during races predates the Kentucky Derby. He wore them to victory in four earlier races. But he doesn’t wear them while training.

In 2012, stewards banned I’ll Have Another, which had also won the Kentucky Derby and Preakness, from wearing nasal strips at Belmont. The horse scratched ahead of the race due to injury, however.

Now it’s on California Chrome to attempt to make history at the third — and historically most difficult — leg of the Triple Crown, nasal strips and all.