Where Sallie Krawcheck is putting her money now 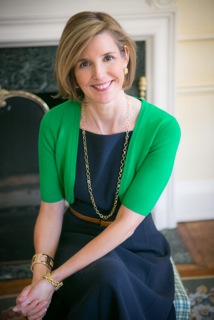 Sallie Krawcheck, once the most powerful woman on Wall Street, revealed this morning what the next chapter of her career is all about. She is turning 85 Broads, the women’s network that she acquired a year ago, into a firm called Ellevate that will invest in companies with a significant number women in high positions. With fund manager Pax World Management as her partner, Krawcheck is launching the Pax Ellevate Global Women’s Index Fund. This is quite a career reinvention for the woman who rode a rollercoaster at the top of giants such as Citigroup (C) and Bank of America (BAC). (I reported to seven financial-services CEOs, which I think is more than anyone else on the planet,” she says). I talked with Krawcheck today about her new direction.

Q:Sallie, when you bought 85 Broads a year ago, did you know that you would get into the fund business?
A: You know how we all have hypotheses about things—then we refine our thinking? When I bought 85 Broads, I was open-minded. This is the way I’ve gone about all my jobs in financial services: Let’s see what all the constituents want. Polling the members of 85 Broads, now Ellevate, they told us they want to invest in companies that have women in senior management.

How many members does Ellevate, have?
We have 34,000. That’s up from below 30,000 when I bought 85 Broads. But the revenue is up more than 100% because women have upgraded and companies have joined.

Can you give me some idea of the revenue?
No. That’s the wonderful thing about having a business that’s private.

You remind me of Sheryl Sandberg, who never thought much about women leaders until came to the Fortune Most Powerful Women Summit in 2005 and had a “self-described “a-ha moment.” You spent your corporate career paying little attention to female leadership. What changed you?
When you’re in those corporate jobs running 1000 miles per hour, you have x amount of time for reflection. I always had diverse teams. But my first step in this new direction was when we were coming out of the financial crisis, and I started thinking about what could make the industry safer. There were lots of issues. Greed. Capital. Liquidity. The topic of diversity kept coming up. I kept fighting it. But I approach everything like a research analyst. And the research kept showing that diverse teams make slower decisions but more effective ones.

So, your company is Ellevate with two Ls.. Have you worried that this new name will be difficult to search online?
Yes, but having a name that’s unique is important.

How did you come up with “Ellevate”?
It happened on the sofa. I had just come back from a run. I was sweating. I started to doodle names. You know that feeling when you know you’re about to know something? It’s like a brain jiggle. I had a brain jiggle. I like Ellevate because it connotes gender and movement.

— These are among the top holdings of the new Pax Ellevate Global Women’s Index Fund —and Krawcheck’s take on why they fit the investment criteria. This list shows that even companies with shortages of women in senior positions, such as Google, can make the cut if they are big and global and compelling investments.

PepsiCo (PEP): Indra Nooyi serves as chairman and CEO. There are nine women among the 30 executive officers and five women on the 13-member board of directors.

Lockheed Martin (LM): Marillyn Hewson is chairman, president and CEO, and women comprise 33% of the board. Women hold 20% of executive positions and 25% of the workforce.

Microsoft (MSFT): There are two women, including CFO Amy Hood, among the senior executives. Two women serve on the 10-member board of directors.

Toronto-Dominion Bank (TD):Women comprise 31% of the board of directors, and there are three women among the company’s 11 group heads.

Procter & Gamble (PG): Five women serve on the 11-member board, and there are 12 women among the 42-person senior management team.

Aetna (AET): Four of 11 senior executives are women, and four women serve on the 12-member board. As of 2013, 75% of Aetna’s employees are feamale, and women hold 64% of management/supervisory positions.

General Electric (GE): There are five women among the 21 corporate officers and five women on GE’s 17-member board of directors.

Estee Lauder (EL): Women comprise 47% of board of directors and 33% of the senior executives. Women represent 77.6% of the U.S. workforce and 51% of VP positions and above.

Canadian Utilities Limited (CU): The chairman and CEO is Nancy Southern. There are five women among the 17 executive officers. Women comprise 33% of the board of directors.

Hennes & Mauritz (HNNMY): Women comprise 38% of H&M’s senior management, 58% of its board of directors and 77% of the retail company’s workforce.

Yahoo (YHOO): Marissa Mayer is CEO. Women comprise 33% of her executive team. Two women serve on the seven-member board of directors.

Xerox (XRX): Eight women, including chairman and CEO Ursula M. Burns and CFO Kathryn Mikells, are among 32 corporate officers. Women make up 40% of the board of directors.

Google (GOOG): Women comprise 30% of Google’s board of directors. Women@Google is a global network with more than 4,000 female Googlers across 27 countries.

Mondelez International (MDLZ): Five women, including chairman and CEO Irene Rosenfeld, serve on the 13-member management team. There are three women on the 12-member board of directors.