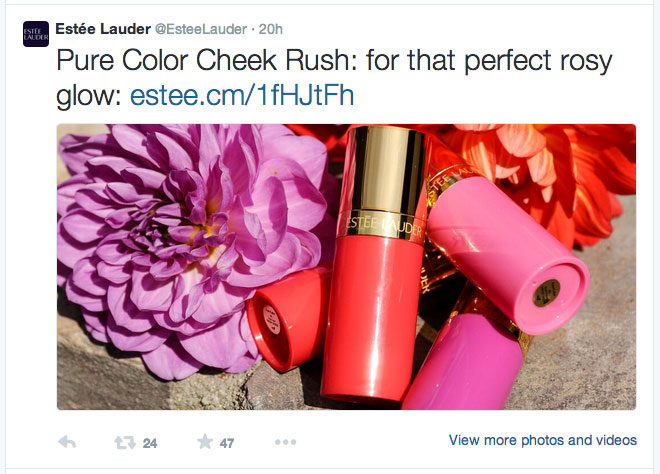 Target’s December 2013 data breach was a public relations nightmare, but the company responded swiftly over social media, posting safety guidelines on Twitter and keeping an open dialog with its aggrieved customers. In addition to customer service, Target’s social media strategy covers content and recruitment. The company has active Twitter and Facebook accounts, multiple Pinterest and Instagram accounts dedicated to showcasing products and careers at Target, and a quirky Vine channel and Tumblr fashion blog that you might call avant-garde.

Southwest’s social media strategy is all about fun. The airline styles its corporate announcements with bold text and bright colors, and takes a multimedia approach with videos, vintage photos, travel tips, and customer service interactions. The company can be found on Twitter, Facebook, Pinterest, Instagram, YouTube, and Flickr. It should come as no surprise that Southwest was named #7 on Fortune’s World’s Most Admired Companies 2013 for its ability to win over customer loyalty, because its social media strategy plays a starring role.

Starbucks wants to be as cool as a cup of iced coffee, and the company uses its social media presence to preserve a sense of creative exuberance. Its Pinterest page, Starbucks Loves, features boards ranging from customer submitted photos to products to DIY suggestions. Its very active Instagram account presents artsy and atmospheric photos of coffee, some of which are taken by fans. Its Twitter account has been used to educate followers on coffee culture, among other things. And the company’s latest social media project, its #WhiteCupContest, asks patrons to submit pictures of decorated Starbucks paper cups.

Estée Lauder’s social media strategy can be summed up in one phrase: Attention to detail. On the visual side, the brand’s Instagram page features beautiful images of makeup, skin, and nail products, and its Pinterest profile has hundreds of perfectly styled, artistic photos. The company’s Facebook and Twitter pages pull from tutorials on the Estée Lauder website and are a platform for the company to respond to customer comments and queries. The company has also embraced guest bloggers, including Emily Schuman, the woman behind the popular lifestyle website Cupcakes and Cashmere.

Financial institutions tend to be particularly careful about their activity on social media channels, and Goldman Sachs is no exception. But what it lacks in variety – the banking company only posts on Twitter, Google Plus, YouTube, and LinkedIn – it makes up for in interesting content. The company keeps things friendly – albeit buttoned up -- with updates that feature employee profiles, company news, and financial advice. It has four Twitter accounts (notably, one is for female entrepreneurs) and its YouTube channel explains its different financial programs, career information, and economic outlook.

Western Digital’s social media strategy is to make computer storage look cool – not easy when you sell something most people don’t think about. To change that, the company is active on Facebook, Twitter, YouTube, LinkedIn, and Instagram. WD is notable for its more than two-dozen international Facebook and Twitter accounts, and its Instagram page proves that a photo filter can make even an external hard drive look attractive. Though WD mostly uses its social media posts to advertise its products, it also uses quirky illustrations and vintage photos to share tips and fun facts.

In social media land, Capital One keeps a laser focus on customer service and community building. On its Facebook and Twitter pages, the bank responds to almost every customer comment, regardless of whether the comment is positive or negative. On Instagram, it posts images of places to visit, action shots from concerts and events, and commonplace pictures of food and coffee. On Pinterest, Capital One has a few dozen boards dedicated to holiday campaigns and DIY crafts, and the company has also taken advantage of the “place pins” feature by mapping out dream honeymoon spots.

Allstate’s social media approach is to clue its customers in to the inner workings of the company while providing useful life advice at the same time. Its Instagram page is filled with pictures of company events, its Google Plus page shares posts from the company’s blog, its Facebook and Twitter pages are an open dialog with customers, and its YouTube page has a series of informative videos as well as its collection of its iconic “Mayhem” commercials. Is it hard to make insurance feel fun and friendly? Sure. But Allstate is determined to overcome that.

General Electric may be more than a century old, but you wouldn’t know it by looking at its social media channels. Its Pinterest page is rife with quirky boards that appeal to the geek at heart. From home makeovers that feature its light bulbs to colorful graphics that feature magnificent machinery, GE doesn’t focus on its products so much as the experiences that make science and technology exciting. On Twitter and Facebook, GE poses questions to its followers, asking them to, for example, try to stump one of its engineers. And a recent social media campaign, the video series #SpringBreakIt, shows items like teapots, baseballs, and cinder blocks being destroyed in slow motion.