From consulting to consoling 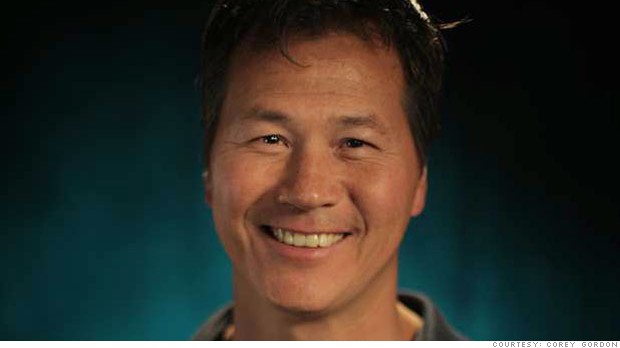 Ask Corey Gordon how old he is and he couldn’t tell you, because he has no birth certificate. His childhood was fragmented, just as his memories of it are.

He says he vaguely remembers an older woman taking care of him in his infancy, but she wasn’t his mother. He remembers being cold and walking barefoot on ice. He remembers going hungry, and being so malnourished that when he coughed, he had to pull worms out of his mouth.

The abandoned child of a Korean woman and an American soldier who met during the Korean War, Gordon was, like so many children of such unions, ostracized. His mother abandoned him, and he might have been forced to survive on the streets had he not been delivered to an orphanage, where he experienced his first shower, food security and kids his own age to play with. He recalls the day an orphanage staffer told him he’d been adopted by a family in Minnesota. “It was a dream come true. All I wanted to be was to be American,” Gordon says.

Adjusting to the dream, and his new surroundings, would be tough for Gordon. “On my first day of school I ran away because I thought I was being given away. My parents had to come with me to school for several weeks so I could realize that I could come home every day,” Gordon recalls.

Over time Gordon settled into life in Minnesota, went on to college Northwestern College in Minnesota, started a family of his own and began a successful career in marketing, mostly for finance and banking companies. In 2003, looking to cut down on travel, he took a job with Americana Capital Corporation, a bank holding company, which owned Americana National Bank, a small asset bank in southern Minnesota. Gordon was hired to help grow the two national subsidiaries ACC had.

It seemed to be the perfect fit, but six to nine months into the job began to hear rumblings of issues the CEO was having with the Office of the Comptroller of the Currency. The issues were concerning to other holdings the CEO had and his alleged use of the bank for his own personal purposes. In the end the CEO was removed from the company was and barred from banking. Gordon was not involved with the management of the bank and was implicated nor charged of any wrongdoing in the matter.

Gordon, who was 36 at the time, was too young to retire from professional life, but the problems at American Capital rattled him. He realized he was seeking more meaning and fulfillment from his work. He began consulting to nonprofit organizations, providing guidance on marketing and fundraising. In 2012 Gordon started his own consulting firm aimed at helping nonprofits, Nonprofit Strategies, and found his services in great demand. But there was one nonprofit that he found himself going the extra mile for: Feed the Children, one of the largest charities in the world.

“I knew some of the guys, so I flew down and met with the executive team and took them on as clients. And before I knew it I was working 50 hours a week, almost double the budgeted 29 hours. I talked with Kevin (Hagan, President and CEO of Feed the Children) and he was like, ‘Why don’t you just join us?’”

So he did. Gordon put his consulting business on hold on Oct. 1, 2012, and became the chief marketing and communications officer of Oklahoma City-based Feed the Children, a faith-based organization that provides food and other poverty relief in the U.S.

Last summer, Feed the Children had the opportunity to open an office in South Korea and Gordon was selected to lead the trip. The office will direct all support and fundraising programs in the country which will most likely include an orphanage, among other things. Gordon expressed some initial hesitation about returning to his native country, but in the end he agreed. The trip was followed last by a trip in December to North Korea on the invitation of Dr. James [Kim, president of Pyongyang University of Science and Technology. (Dr. Kim, featured in Fortune in 2009, also left a life in business to pursue a broader calling, bringing Western-style education to North Korea.)

In Pyongyang, Gordon visited five orphanages to see firsthand the university’s strategies to combat hunger in the poverty-stricken country. Feed the Children is going to begin providing support to the orphanages in the near future. For Gordon, now 47, the visits were at once heart wrenching but also inspiring. “For me, as a former orphan, to go visit those orphanages? Sometimes life can seem like a meandering journey,” he says. After many so twists and turns, Gordon now seems to have found a clear path.

Advice for retirees considering a move from corporate life to giving back “First, do it. You won’t regret it. Second, start by identifying the cause that you’re the most passionate about. There are many good organizations, but given the reality, there will be challenges with all of them. Having the bedrock of a cause you’re willing to invest your life in will keep you energized.”

What he wishes he knew before the switch “I was far too naïve coming into the not-for-profit sector. The nonprofit space is indeed about charity, altruism, passion and doing good, but it’s still human beings managing the organizations and running the programs. I was surprised at how badly nonprofits often treat each other, viewing each other as competitors, when if you look at their vision/mission statements, ostensibly they should be collaborating. If people can check their egos and logos at the door, there’s a tremendous opportunity for real positive change.”

Biggest challenge “Culture shock. These are broad-brush statements, but generally speaking, in the for-profit realm, change can be constant, with market forces and consumers driving new strategies, technologies and products/services. Change is anathema to nonprofits. For-profits play to win, with a focus on risk management. Nonprofits play not to lose, with a focus on risk avoidance. For-profits embrace innovation and R&D, looking for exponential gains. Nonprofits feel hamstrung by the insane fixation on arbitrary overhead ratios, thereby avoiding innovation and R&D, finding safety in incremental gains.”

Biggest reward “Purpose. I look back on my life and see how all of my personal and professional experiences have woven together for a work that takes me far beyond myself. To know that every day I get to wake up and positively impact the lives of children here in the U.S. and around the world that brings a wonderful sense of purpose and meaning for what I do each and every day.”

Next is a series of articles that looks at executives’ efforts to use their talents and skills to enrich or support the lives of others and upon retirement from professional life.