The latest from Groupon: A tablet for retailers 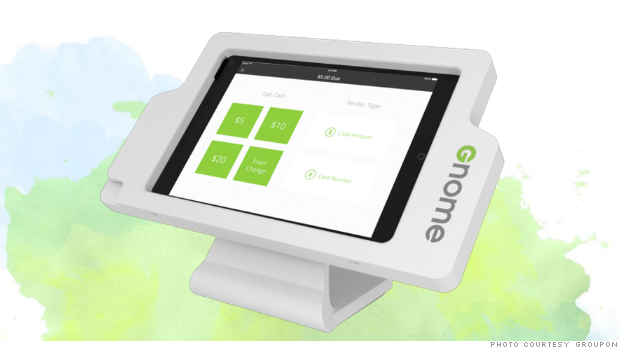 You could argue there’s no company better than Groupon (GRPN) at helping small, local merchants get new customers to walk through the front door. With its latest brand extension — a tablet point-of-sale (POS) system — the daily deals pioneer wants to help merchants keep them there long after the first transaction.

Called Gnome (pronounced “Genome”), the technology connects via a cloud service to Groupon’s account database where it can redeem vouchers electronically. If the voucher-holder uses Groupon’s Android or iPhone mobile apps — which more than 80 million people have downloaded — the transaction happens through a Bluetooth wireless connection. For customers not using smartphones, the cashier can access accounts by typing in the voucher number or the person’s name.

Groupon already sells an iPad POS system, called Breadcrumb, to high-end restaurants. This new solution, likely to be priced starting at about $10 per month, is targeted at existing Groupon customers, at least half of which still rely on old cash registers, said Rich Williams, senior vice president of global marketing for Groupon.

Because Gnome will collect information about what people are buying and how often they visit, nail salons, spas, restaurants, boutiques and other small businesses can create more sophisticated customer relationship management systems. “We can put our core relevance engine to work at the customer level. The more we learn, the better job we can do at showing great and relevant deals,” Williams said. “They will have a better shot at having a customer come back.”

Gnome is being tested in a handful of markets, and Groupon is rolling out the system across North America gradually in the coming months.

As a standalone POS system for small businesses, Gnome will encounter plenty of competition including offerings from legacy players like NCR (NCR) and upstarts such as Revel Systems and ShopKeep.

But the underlying relationship management and marketing personalization technology that come with it are tough to ignore. “Groupon has the ability to offer a suite of services that is unique to the merchant that will help them more effectively market their business,” said Tom Forte, managing director and senior research analyst for Telsey Advisory Group.

Groupon’s rapidly growing mobile presence ways heavily in its favor — as of March 2014, 54% of Groupon transactions were completed using its apps. But getting merchants to embrace digital POS technologies will be an uphill battle. “There are many examples of compelling technology to drive mobile payments, tablet-based payment systems,” Forte said. “But it’s hard to know when adoption rates are going to materially improve.”

A quest to remain relevant

Gnome is the second Groupon brand extension this month. In early May, the company launched a new service called Basics, to appeal to people that buy things in bulk. Right now, those offerings are limited to things like dietary supplements, paper goods and soap. Groupon has also been highly acquisitive: In January it completed its buyouts of LivingSocial Korea, the company behind Ticket Monster; and Ideeli, a platform for running flash sales for fashion and apparel. “Wherever you are, we want to play,” Williams said.

Sucharita Mulpuru-Kodali, vice president and principal analyst with Forrester Research, said diversification is necessary for Groupon to stay relevant. “The core Groupon model is mature, hard to grow,” she said. “There are no more daily deals companies that they could acquire.”

The challenge will be moving to a model that offers “great value” to consumers, while allowing the small businesses that rely on the platform for marketing to grow profitably. “They’ve gotten better at personalization . . . They are reducing friction,” Mulpuru-Kodali said. “At this point in time, for them to get profitable and to get new merchants, that is what they need to do.”

One of Groupon’s most important strategic bets is Marketplace, which people can visit proactively to search for specific goods and services. “This is a company transition from daily deals to what they call ‘pull marketing,’ where consumers can choose from deals,” Forte said.

The platform is a core component of its quest to build deeper relationships with both consumers and merchants. During March, 9% of Groupon’s total customer traffic in North America ran searches, up from 8% in December 2013. Investors have been impatient with the transition, Forte said, but the company anticipates an acceleration of this shift during the second half of 2014. “Management is drawing the line in the sand,” he said.

As of May 29, Groupon shares were trading slightly above $6, compared with nearly $12 per share at the end of December 2013.

For its first quarter ended March 31, Groupon reported revenue of $757.6 million, an increase of 26% from the year-ago quarter. Its net loss for the quarter was $37.8 million. First-quarter gross billings — which measure the total dollar value of goods and services purchased by customers through its platforms — were $1.82 billion.

“We’re on track with our plans to 2014 to invest in the growth of Local, improve our Goods margins, and drive profitability in our international operations,” said Groupon CEO Eric Lefkofsky, in a statement. “As a result, we have further confidence in our results for the back half of the year and have increased our full-year outlook.”

The company ended the first quarter with $1 billion in cash and cash equivalents. During the quarter, it repurchased slightly less than 3.1 million shares of Class A common stock at an average price of $9.58. The repurchase program is ongoing through August 2015.