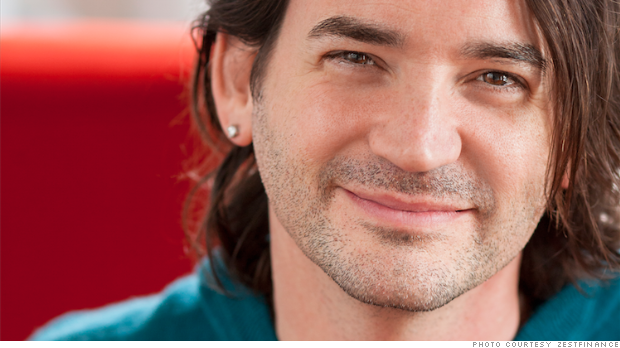 FORTUNE — Douglas Merrill is used to overcoming challenges. As a child growing up in Arkansas, he was deaf for three years — the result of an auditory nerve infection — and had to relearn how to speak. The difficulty was made more problematic by his dyslexia, which was not diagnosed until high school. At an early age, Merrill learned that he could achieve his goals, but his path wouldn’t always be the obvious one. After earning degrees in sociology and economics from the University of Tulsa, Merrill went on to receive a Ph.D. in cognitive science from Princeton and eventually became the chief information officer at Google (GOOG).

Today, he runs ZestFinance, a 100-person company that he started in 2010. ZestFinance uses a combination of artificial intelligence, machine learning, and big data to help lenders assess the credit risk of potential borrowers. The company’s mission is to help people who are “under-banked” find access to credit at lower interest rates, a particular challenge since the 2007 banking crisis.

Merrill, 43, is based in Los Angeles. He spoke with Fortune.

I admire a guy who’s been dead a very long time. His name is Matthew Fontaine Maury. Maury was a lieutenant in the U.S. Navy in the 1800s, when ships had sails. He was the captain of a ship, and the routes that he tended to sail were from west coast of the U.S. towards Japan. Sometimes the routes were great, and sometimes the routes were very rough. Like almost all ship captains, he knew exactly one way to get to Tokyo, but every captain’s path had slight differences.

What he discovered were the trade winds and the notion that weather changes throughout the year and as a result the time to travel changes over time. He basically crowdsourced routes all over the world. If you look at the data over time before Maury, the routes were kind of random between cities; they were all over the board. So the next 10 to 20 years after Maury had this idea of crowdsourcing routes, the routes got more and more defined and sensitive to seasonal weather patterns. The sea is how everything in the world works; it’s the backbone of trade and information. Maury provided massive change.

I want to go slightly off the beaten path and talk about the Sandy Hook Promise Foundation. Sandy Hook Promise is a group that was founded after the Sandy Hook tragedy a couple of years ago. It was founded by a group of parents, and a bunch of Silicon Valley VCs are in it, and they are trying to find ways to improve school security by using venture capital-ish formats. They try to let people in the world come up with interesting ideas and see if they can seed fund those ideas to find interesting potential ways to reduce school violence.

Biotech. If you look at the incredible increase in computational power and math power, even in the past few years, there has been rapid change from having a very hard time asking the interesting medical questions to being able to start putting together some thoughts. There are companies like Celmatix, a biotech company that gives you very precise guidance on reproductive and fertility issues. For example, if you are on a particular path to have IVF, they take a couple of tests and they gather data about you, and they may say, actually you’re probably a candidate for this procedure vs. that procedure. They care a lot. They’re an example of a company that is doing something interesting in the field.

I think oftentimes people get advice to take more science classes or go do an internship at a firm, and that’s all good. But what I have found useful is that I read very broadly. I read history, biography, fiction, poetry. I read about fields that I know nothing about at all, like biotech. I find that having that broad-based information allows me to stumble across things that really influence my thinking. My advice would be to go read something random. Luckily the barrier to entry for reading is very low, so I have a lot of books on my Kindle.

When I was at Google, one of the things I did was help run the IPO, and one day when I was going through part of the process, I made a big mistake and messed something up that was important. I immediately flagged the thing, but I got a call from Eric Schmidt, the CEO, who wanted to meet me in a conference room. So I’m running over there, and when I get there he says, “Hey, I understand that you did X.” And I said, “Yes, I did, and I’m sorry.” Eric looked at me, put his hand on my shoulder said, “Okay. Don’t ever do it again, but I still love you.” It’s not terribly helpful advice, but it reminds me that people make mistakes and simultaneously you have to hold them accountable for those things and remind them that they’re people that you value and not just a mistake. That was incredibly valuable for me.

The regulatory environment for lending is very complicated. There are state laws, there are federal laws, so we’re continuing to find regulation’s role vis-à-vis other elements. We’re really trying to help, but everything is inherently regulatory. It’s a good challenge in that the industry will be better by increasingly strong and well-intentioned regulation.

I would have started a company earlier. I went around to a lot of other firms, and I always enjoyed it, but I didn’t necessarily have enough confidence in my own ideas to start my own business. Now I’m going on four years, and I love it. I learn something new every day. But it’s also hard because there are no “B” days; everything has to be an “A” day.

8. What is one goal — either personal or professional — that you would like to accomplish during your lifetime?

I want to eat dinner at the White House. I am a distant aficionado of politics. I find the political process fascinating.

I’m going to go in a very strange direction. The last book that I just finished last night was by a guy named Michael Easton. Michael is a friend of mine who is an actor but also a writer of graphic novels. He wrote one recently called Soul Stealer. He gave it to me for Christmas in a hardback cover, and I was just now getting around to reading it. It’s interesting to me that, at 43, I can still read comic books. The style of how the art is produced is different from when I was younger. The physical art is different. It’s much darker, and the story is grittier, more painful, and disturbing on multiple levels. It’s not just pure violence, it’s actually hard to read; it’s sad and a little bit upsetting. The ability to use this two-dimensional, small frame art to capture the emotional color of a city is challenging and fascinating. What a cool application of art.

The fingernails of my left hand are painted with black nail polish. I don’t know why it’s one hand and not two. I don’t know why it’s my off hand. I have no story other than I like how it looks. I used to do it myself but then I realized that I suck at it. Now I pay someone to do it. One of the benefits of our company is that we have a manicurist who comes in every week, so I have her do it.