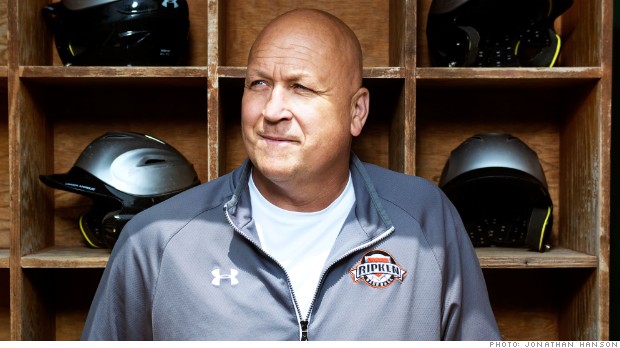 You hear about them all the time: athletes who blow their money after leaving the game. The contributing factors are many: over-spending; lack of financial guidance ahead of time; investments in risky ventures; giving money to needy friends.

In our new series Pro-Files, a collaboration between Fortune and Sports Illustrated, we focus on those who have done it right— the former pros succeeding in business beyond the court or field, and the current pros wise enough to be setting up now for when they retire.

Who better for our first installment than baseball’s “Iron Man,” Cal Ripken Jr.? In the May 19 issue of SI and June 16 issue of Fortune, read our story on the “Business of Cal,” which is built around family-friendly youth baseball tournaments at state-of-the-art, uniquely designed complexes.

In his talks with Fortune, Ripken touched on more than just his business philosophy. Here, some of the Iron Man’s insights and secrets that didn’t make it into the mag.

What follows is an edited and condensed transcript.

Why do so many guys seem to fail in business after they leave sports?

Ripken: Well, where many guys go wrong is in putting money into a business they don’t understand. When your contracts are out there, and they know how much you make, you’re targeted. And you have the discretionary income so that if you want to get into those things, you can. Whether you should or not is up to you. But my basic principle was, ‘Well, what do I know about that business?’

To me, I wanted to stay within my expertise, so it’s easy to say [when someone asks him for money for an idea] ‘I’m investing in x, y, and z, and I don’t know anything about that.’ It’s easy to say that. I’ve invested mostly in myself. In a sense, you’re betting on you.

And the business you know, that you’ve stuck to, is baseball.

Ripken: Well, I started a business [while still playing in the MLB] that eventually became Ripken Baseball. At that time the sole purpose of it was more of a service-oriented business: scheduling, endorsements, licensing, all under one roof. I formed a structure that was just servicing the business of Cal.

After I retired, that became more of a business that looked over the tournaments, the camps, and minor league baseball. It rolled into those businesses, and now so many years later we’re looking to grow mostly in the youth tournament space. We’ve developed those models, which are really good, profitable working models that can be replicated in other parts of the country.

I’m still an endorser, and I make appearances, that’s still part of it. But now the business is much more than me.

Do the players today not think ahead enough? Or overall, are many of them simply not interested in working in any capacity after they play?

Ripken: Well, they should want to do something, some kind of work. To me, the satisfaction of accomplishing something is the bigger driver. But the point is to find something you like to do. And a sense of self-worth.

It’s interesting to me what Derek Jeter will do. Starting businesses or getting an equity position in one. He has enough money to actually be the money guy and the idea guy, too. That’s pretty good. It’ll be fun to watch him. I think Derek’s been thinking about things for a long time.

Derek Jeter’s going to have the luxury of leaving the game on his terms, and he’ll do it in good fashion, like he does everything. He witnessed Mariano Rivera doing it, which was really wonderful to watch in all ways. But at that stage in your career, you’re competing now for a position on a 25-man roster—but you’re held to a standard that you created. He’s still worthy of being a starting shortstop for the Yankees, he still has all the skills, but no one ever looks at it that way—they’re comparing him to himself. That’s the sad part about it, is people start saying, ‘It’s time for him to go, he’s not what he used to be.’ Well, who is, after that long? He’s still very good and if you look around the league, who are you going to choose in the playoffs if you want a chance to win? You’d still choose him. But the sad part is they’re comparing him to his own greatness.

You said the business of Ripken Baseball can eventually continue without you being involved day to day. So do you think about moving on to something else, like finding a management position in the MLB? Maybe with the Orioles?

Ripken: [He laughs…] I laugh because you have to be very careful how you choose your words. I’ve had experiences, even just last year, where you say something and there’s a ripple effect and people go and run with it and write about it.

The truth of the matter is I’ve lived a life in professional baseball. From when I was a kid, my dad was in professional baseball and I listened and learned a lot just from being around it. Then I had a chance to experience it myself and take that learning further. So I developed a skill set that part of me wants to be able to apply in the highest way, and that’s at the big league level. In some capacity. I don’t know what that is, or if that feeling will go away.

The other side of that is I have some viable business I’m trying to expand on, and you have to make a commitment to do that.

I made a choice when I retired that I would pursue these business things, because it afforded me a break from the professional schedule, so most importantly, I can see my kids on a regular basis. They were 8 and 12 when I retired. I could watch Ryan’s games. I could coach my daughter in basketball and go to her ballet recitals. When you’re in professional baseball, you can’t do those things.

When I made that choice, I was okay with it. Then when they start to get grown up and get out of the house, you have a chance to reevaluate. I’m in a position in my life now where I’m reevaluating. Where do I want to spend my time? Is the window open still, or is it closed? Where could I come back?

It was fun, last year, to be spoken of in a manager position. It never got to a formal stage. It was interesting to think about it, but that’s about it.

I was down at the Nationals and [GM] Mike Rizzo, off the cuff, said, ‘You know, I gotta hire a manager at the end of the year.’ And I said, ‘Yeah, I do. Who are your candidates?’ He half-jokingly said, ‘What about you?’

WATCH: Cal Ripken on the big business of baseball