The Apple-China Mobile iPhone deal: What analysts are saying 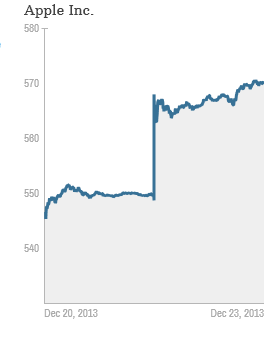 You might think that after six years worth of speculation, Apple (AAPL) analysts would have nothing left to say about the China Mobile (CHL) iPhone distribution deal announced Sunday.

You would be wrong.

Below: Excerpts from the notes we’ve seen so far. More as they come in.

Charlie Wolf, Needham: Waiting for Godot no more. “Apple announced that it had finally signed a carrier agreement with China Mobile, the largest network operator in the world, with over 760 million subscribers. We note that the frenzy in the media anticipating this event was 100% self-induced, since Apple itself seldom if ever commented on its negotiations with the carrier.” Rating: Buy. Price target: $595.

Brian White, Cantor Fitzgerald: Apple & China Mobile Saddle Up the iPhone for the Year of the Horse — Giddy Up! “Sunday evening, Apple and China Mobile finally tied the knot with a multi-year agreement announced. This long-awaited agreement includes Apple’s new iPhones that will be available on the China Mobile 4G & 3G networks on January 17, 2014. In our view, this agreement is well timed for the Chinese New Year that begins on January 31, 2014, the year of the “horse”. In our view, this has been the most difficult carrier agreement for Apple to negotiate in its history; however, we believe the opportunity for the iPhone to expand its reach within China Mobile’s wireless subscriber base will prove to be well worth the wait.” Rating: Buy. Price target: $777

Ben Reitzes, Barclays: China Mobile Deal Arrives, Focus Now on Margins and Buyback. “We believe this announcement is a relief given concerns after the absence of Apple at China Mobile’s Global Partnership Conference last week. We believe Apple is one of the few companies in our coverage that has the potential to grow within China in 2014.” Overweight. $585.

Bill Shope, Goldman Sachs: Apple signs long-awaited China Mobile deal. “Given Apple’s steep wholesale prices in China for the iPhone, we believe subsidy levels will be key to determining steady-state volume levels. With that said, this deal gives Apple access to a growing smartphone installed base at China Mobile, which currently stands at 170 million 3G customers. We believe this could add another 15-20 million units to Apple’s annual iPhone shipments, and potentially boost CY2014E EPS by more than 5%.” Buy. $620.

William Power, Baird: China Mobile Under the Christmas Tree. “Pricing details have not yet been divulged, though we would tentatively expect something similar to the current China Unicom and Telecom deals. Excluding subsidies, which are currently available, the 16GB 5S retails for $871 with the 5C retailing for $739… Market research estimates suggest there could already be 40 million+ iPhones on China Mobile’s 2G network, providing a significant upgrade opportunity. Outperform. $620.

Gene Munster, Piper Jaffray: China Mobile Deal Signed; Should Add 5% To Street Revenue In 2014. “We believe the iPhone on China Mobile essentially de-risks the Mar-14 guide with revenue guidance likely in-line to 2% higher than current Street estimates, and implies 14-20% y/y iPhone unit growth vs. the Street at ~17% for Dec-13. For 2014, we believe China Mobile should add 5% to Street 2014 revenue estimates. While we have a high degree of confidence that China Mobile will be additive to Street numbers in 2014, we are taking a conservative approach and leaving our estimates unchanged until Apple reports.” Overweight. $640.

Amit Daryanani, RBC: China Mobile to Join Apple Carrier List. All You Need to Know: As of November, China Mobile serves 181M 3G customers (763M total subscribers) and the AAPL/China Mobile deal opens a large subscriber base for the iPhone product line (5s/5c). We believe this could add $10B/$3.00 to Apple’s annual financial model over the NTM period. Notably, the addition should materially impact Apple’s Mar-qtr as Chinese new year sales should be bolstered by the increased demand and market opportunity. Given the increased March opportunity from the China Mobile deal, concerns surrounding Mar-qtr guide should decrease. Outperform. $590.

Timothy Arcuri, Cowen: China Mobile Official; Estimates Still Biased Higher. “With the CHL announcement now on the tape, the focus should shift to March units where we are taking a wait and see approach and see no reason to modify our estimates or $590 target, although we feel it is more biased to the upside. We continue to see 2014 as a year where AAPL regains its product mojo including: 1) a larger screen iPhone 6 in Sept; 2) a tablet/clamshell hybrid (potentially with a keyboard) in May; 3) iBeacon; 4) potential iWatch; and 5) a long-awaited truly purpose-built low- cost iPhone in late ’14/early ’15.” Outperform. $590.

Maynard Um, Wells Fargo: AAPL Signs China Mobile; Other Positive Implications. “The deal should give further confidence to both December and March quarter iPhone units. China Mobile’s TD­LTE network operates in the 2.5GHz band, which could also bode well for iPhone at Sprint [covered by Jennifer Fritzsche], which plans to overlay a faster 4G coverage in urban areas in 2014 using the 2.5GHz spectrum acquired through Clearwire.” Market weight.