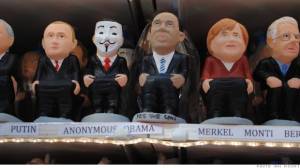 The story of Marc and Sergi Alós’s business success is one of innovating a traditional product into something modern and appealing to youth. Of discovering an unexploited market niche and rushing into it. Of constantly creating new products to turn one-time buyers into repeat customers. And, as always, it contains an element of luck.

But most of all, Marc and Sergi’s story is about poo.

It all began in the Spanish region of Catalonia in 1992, when Marc and Sergi’s mother Anna María Pla, a ceramicist, bought molds for Christmas nativity figurines from a retiring craftsman in Barcelona and took over his business. Though it began well enough, the trade was declining; China started to export plastic figurines, and Spanish society was becoming less religious. Facing a steep drop in sales, the family began to search for a new product line. And then, in 2003, Marc, 42, and 39-year-old Sergi saw their salvation: the Catalonian crèche. That is, the caganer.

At some point, in the late 17th or early 18th century — for some reason, historians have yet to turn their full firepower on this — caganers appeared on the outskirts of the Catalonian manger. These figurines depicted a pagès, or Catalonian farm worker, in his traditional white shirt, red cummerbund, and red Smurf-like cap. Unlike your typical nativity attendee, however, he squats, with his black pants around his ankles and a soft-serve swirl of poo on the ground behind him. In family-friendly terms, caganer means “pooper.”

The more serious-minded explanation is that the pooper is a fertility symbol (“The caganer fertilizes the earth so the next year it gives us its bonanza,” says Pla, who retired last year); for others, it’s just a funny custom for kids who like to find the hidden pooper when they visit a relative’s house.

It wasn’t the meaning that attracted Marc and Sergi, but the possibilities inherent in updating a funny tradition: 2003 was an election year in Catalonia. They had noticed that some artisans occasionally turned non-nativity characters into poopers — nuns, angels, the devil — Marc and Sergi decided to try poopers in the likenesses of local politicians.

It was an immediate hit.

Loath to appear uncool in the face of an irreverent homage, local politicians had their pictures taken with their caganers. Soon enough, not having one was a sign of a low Q Score (or, well, a low Poo Score); when the relatively unknown Jordi Hereu became mayor of Barcelona in 2006, the newspaper El Periódico underscored his anonymity with the headline, “Hereu does not have a pooper.”

Pooping likenesses of the Barcelona soccer team took off, leading to strong sales of figurines for stars like Lionel Messi. And foreign tourists — over 7 million tourists come to Barcelona every year — scooped up caganers of celebrities like Angela Merkel, Marilyn Monroe, Pope Benedict XVI, and Barack Obama. (Obama’s pooper, decorated with the logo “Yes, we can,” is the bestselling caganer outside of the traditional pagès.)

The family even reaped some benefit from the news cycle. “The year we brought out Tiger Woods was the year all his affairs came out. And this year, we brought out Nelson Mandela,” says Alós.

A decade ago, the family moved its business to a warehouse in Torroella de Montgri, a small town 90 miles north of Barcelona. There, surrounded by character molds, unpainted figurines, and bagged inventory, Alós tells me that today the business sells about 35,000 poopers annually, pulling in some 180,000 euros ($250,000). He says that it has about 80% of the ceramic pooper market, and that the business grows between 10% and 15% annually.

“The caganer was always known here. But we made it internationally popular,” Alós says.

Each year, the family decides on the 40 or so new characters they will add (there are some 325 in active production) and Marc, who, in addition to poopers, also makes large public art, carves the originals out of plaster. A mold is made, clay reproductions are fired, and the figurines are painted by people from local foundations for the mentally handicapped. They are then sold for anywhere from four to 50 euros online, in tourist shops, in the department store El Corte Inglés, and in the Barcelona airport. Marc runs production while Sergi leads the business side.

While selling ceramic poo is a funny business, it’s still a business, and Marc and Sergi face the same issues as any entrepreneur. There are uncontrollable variables, like a recent injury to Lionel Messi, which has hurt his pooper sales. There are also the margins. To smooth out sales, the brothers have begun to shift a good part of the business from Christmas fair retail to wholesaling, but that means less profit (“You have to work double to earn the same,” Alós says). And then there is the issue of a limited market size, which the family has addressed by diversifying their business interests with a nautical travel agency and a digital marketing consultancy.

But, at the end, their story is still mostly about poo.