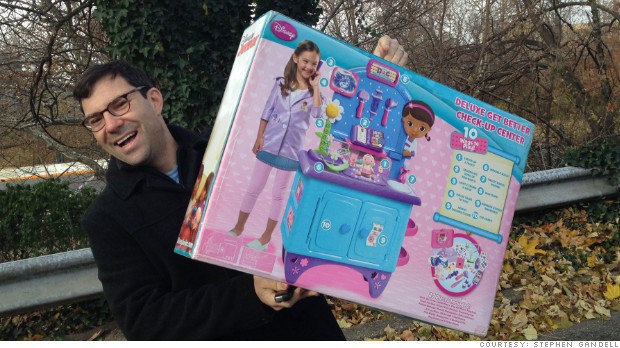 This story starts about a month and a half ago.

That’s when my wife handed my daughter Caroline the Toys R Us catalog and asked her what she wanted for Hanukkah. There were circles around a mermaid Barbie, some Disney princesses (that she already had) and a set of Strawberry Shortcake figures. The biggest and most expensive gift circled was the Doc McStuffins Deluxe Get Better Check Up Center. It was $70. She is 4.

My wife and I didn’t know much about Doc McStuffins. Caroline had only recently started watching the animated Disney (DIS) show about a young girl who is her toys’ internist, surgeon and, at times, therapist. My wife, bluffing, told my daughter that if she wanted such a large present, she might not be able to get much else. When my wife picked Caroline up from school the next day, she immediately said, “I’ve thought about it all day, and the only thing I want this year is Doc McStuffins.”

The weekend before Black Friday, we left the kids with my parents and set out. At our local Brooklyn Toys R Us near Coney Island the salesperson seemed genuinely surprised there were no more McStuffins Check-Up Centers in the back. At the next Toys R Us it was sold out, too. They told us the Coney Island store had it, which we knew wasn’t right.

Instead we headed to a third, larger Toys R Us. A saleswoman said, “Right this way,” when I asked if the store had the Get Better Check Up Center. I followed her to an empty self.

Online, Wal-Mart appeared to have it. But after we added it to our “cart,” and hit ship, we got an e-mail back saying there were none in stock. It was not available on Target.com either. A guy at the Toys R Us in Times Square said people had been calling all day looking for the Check-Up Center. His computer said the store had a negative 65. I still don’t know what that means.

And it wasn’t just New York. The toy appeared to be sold out across the country. Amazon had it, but for $175. On Craigslist, I found a guy in Queens who had six. His price? $150, more than twice what they cost at retail. “You can’t get them anywhere,” he said when I called. “I bought these two months ago.”

I hung up amazed. Thirty years after Cabbage Patch Kids, and in the age of big data and helicopter parents, how is a guy in Queens better able at anticipating what our 4-year-olds want than the rest of us?

There’s nothing new about a hard-to-get Christmas toy. A decade and a half ago, Fortune editor Andy Serwer tried reselling Furbys, that year’s phenom, for an article, hoping to turn a profit. Furbitrage. He quit after a toothless 6-year-old called him a bad man.

But it seems to be getting worse. The number of can’t find items this Christmas is larger than usual. Along with McStuffins, there’s the Flutterbye flying fairy, Xbox One, the Nerf Rebelle bow and arrow and Rainbow Loom bracelet making kit. But the Get Better Check-Up Center appears to be the most elusive.

Doc McStuffins started airing on the Disney Channel in early 2012. The company licenses the toy rights to Deerfield Beach, Fl.-based Just Play. It’s run by two industry veterans, who had success relaunching Cabbage Patch Kids and Care Bears. They shipped 9 million Hannah Montana Dolls in 2007. But Just Play co-founder Charlie Emby says that the Check-Up Center is the biggest hit they have ever had.

The Check-Up Center’s journey to stores started more than a year ago. Emby showed buyers a rough version in October 2012. In January, at an annual toy show in Hong Kong, Just Play had a final product and interest, but few orders. “The days of ‘I love this, here’s an order’ are long gone,” says Emby. “It’s a process.”

“There are more algorithms than there used to be,” says Emby. “But no one really knows what the ultimate consumer will want.” And remember the “ultimate consumer” is my 4-year-old.

Emby doesn’t build on spec, though. And while the Check-Up Center had a lot going for it—the ability for kids to pretend they are the main character on a popular show—there were also risks. It’s large item, roughly the size of play kitchen when built. Retailers would have to be willing to commit more shelf space to sell it than a typical toy. And it’s a higher price item, at a time when the economy still hasn’t yet fully recovered. So for months, the factory ready to make Check-Up Centers was idle.

Robert Weinberg spent three decades at Toys R Us, many of them as the chain’s top buyer. He left in 2001. Weinberg says there is a lot that goes into deciding what toys to buy for stores and in what quantity. A strong brand and whether you like the item matters, but so does reliability of the manufacturer, price and size. Retailers, particularly Wal-Mart and Target, like to keep inventories low. Historically, their strategy has been to expand their toy sections during the holidays, and then shrink them back down after. Keep in mind that anything that doesn’t sell before Christmas must then be sharply discounted.

Weinberg thinks people in his position relied a little bit more on gut feeling back then than they do now, and were more willing to take a risk and promote an item. But even then Weinberg relied on numbers. He said he often asked manufactures how many items they were making. He knew Toys R Us was a certain part of the market, and that’s how much he would buy. So if others were buying less, he would end up with less as well. And you had to lock in decisions early — Weinberg said he typically was done with all his buying decisions by the end of March. If it was a toy based on a brand, you had to hope it would still be hot two seasons away.

For the Check-Up Center, solid orders didn’t start coming in until April. It got to the stores in early September. Once the factory is up and running, it takes about 60 days from when retailers put in an order to when it can get on the shelf. A retailer can get that down to 45 days, if they spend more money on expediting. In-mid October, Emby says sales were well above projects. Orders went up.

But it wasn’t until early November that is was clear the toy was going to be such a hit. By that time it was too late. Emby says some retailers are starting to catch up, but in the end there won’t be nearly enough. “We’re going to sell every single one we made before Christmas and we’re still going to come up short,” says Emby. Indeed, just a few days before Christmas and the Check-Up Center appeared to still be sold out everywhere. “Our goal is not to disappoint,” says Emby. “I’m not happy about it, but it was out of our control.”

In September, TimeToPlayMag.com publishes a list of “most wanted” toys, which is widely followed in the industry. The Doc McStuffins Check-Up Center was on it, as well as Flutterbye. Jim Silver, editor of Timetoplay, says the number of elusive Christmas toys has gone up in the past three years. He thinks it has to do with all the discounts. Retailers have trained shoppers to wait for deals, so consumers buy later. That makes it tougher for retailers to reorder and get items in the store before Christmas.

Emby blames the computer models. “You can use all the algorithms you want, but that’s not what our industry is about,” says Emby. “It’s about emotion and you can’t put a number on that.”

Another factor could be layaway. For the second year in a row, Toys R Us offered no-fee layaway in 2013. Wal-Mart’s layaway has a small restocking fee if you don’t actually buy the items. Silver says layaway has made things better for customers who plan ahead. But worse for those who wait.

Layaway doesn’t explain it on its own. Toys R Us only held items until December 15. And you still can’t get the Check-Up Center. But for a hard to get item, layaway may make a toy seem even more in demand than it is, attracting resellers. There appears to be a large shadow inventory of Check-Up Centers. Go on Craigslist and you will find people in most major cities looking to sell Check-Up Centers for a steep markup.

My family was pulled into this shadow economy. After unsuccessfully scouring all the major toy stores in the tri-state area, I drove to see that $150 Craigslist reseller in Queens. When the guy answered the door I gave him $150 in cash. He gave me one Doc McStuffins Delux Get Better Check-Up Center. (He declined to allow me to use his name in this article.) I was relieved. I asked him how he knew. He said he does his research. He wouldn’t say more. He said he does this every year, and has never missed. I stopped for brunch and was nervous about having it in my car the whole time.

Another father, John, who didn’t want to give his last name, says he spent the last month trying to track down a Check-Up Center for his 3-year-old. He said he called Toys R Us everyday for weeks. He stopped by stores regularly to ask when a shipment was coming in. Two weeks ago, he scored a Check-Up Center at the Toys R Us in Coney Island, the first store I went to. Once he got the toy home, he asked his daughter how excited she would be to get the Check-Up Center. She said not much. She didn’t like Doc McStuffins anymore. He was now trying to sell the toy on Craigslist for $150.

Hanukkah was early this year, so my daughter has already had her Check-Up Center for a few weeks now. She was very excited the night she got it, and made me put it together immediately. The next day, she and her older sister spent a few hours taking turns pretending to be Doc McStuffins. But I haven’t seen her play with it since.

A few days ago, I asked her why she wasn’t playing with the Check-Up Center. She said she had lost the tools that came with it. I asked her if she wanted me to help her find them. She said no, then walked off to find something else to play with. She’s also already started to tell me what she wants for next Hanukkah, which is good. Next year I am starting early.