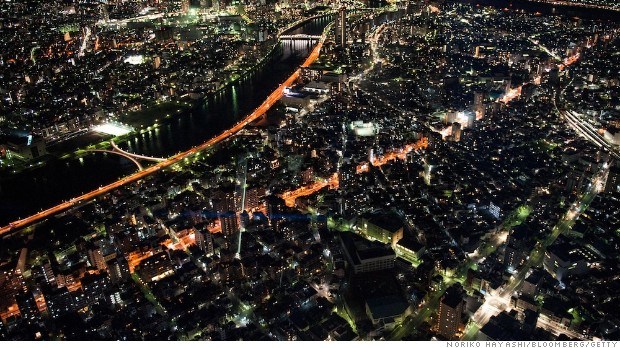 Having ceded the battle of the gadgets to Korea and the U.S., Japan’s electronics titans need to reinvent themselves — this time as our great protectors, apparently.

Harnessing moral panics, such as fear of crime or terrorism, Japan’s largest tech companies are growing and investing heavily in systems for executive command and control, surveillance, and border checks. The results are the most sophisticated spy and monitoring tools ever conceived.

“Japanese companies are the leaders in creating innovative surveillance technology and implementation,” according to a report from the University of Queens in Canada, published in Company/Governmental Surveillance in Japan, a journal of surveillance studies. Japan’s NEC, a leader in the field, now dedicates 10% of its R&D spending to developing these systems.

“Traditionally, Japanese governments have been keen to protect and cultivate domestic electronic companies so that they become the driving force for Japanese economic development,” explains surveillance researcher Kiyoshi Abe at Kwansei University in Japan. “So it’s easy for them to develop and introduce more invasive surveillance technology, utilizing public worry and fear around rising political-military tensions between Japan and China.”

Nor is this exclusively Japan Inc.’s agenda. Corporations worldwide are cashing in on deployment of electronic spying and monitoring. The global security software market grew 7.9% in 2012, according to research from Gartner, driven by “new threats and working practices.”

Japanese companies, however, appear to be among the vanguard in this space. At a recent NEC tech exhibition in Tokyo, absent were the computer monitors and laptops that once characterized the firm. In their place were booths dedicated to data surveillance and face recognition systems marketed as “technologies to safeguard lives and property.”

The eye-catching “safety solutions” include programs aimed at snooping on workers — known as “performance monitoring” in the industry — and an application dubbed the Mental Health Check Tool. As we grow accustomed to business and the state harnessing the tools of the Information Age to scrutinize everything we do and say — privacy is no longer a social norm, claims Facebook’s (FB) Mark Zuckerberg. Japanese technology, it seems, is going one step further: enabling corporations to monitor our feelings.

Now in use by several undisclosed blue chip companies in Japan, NEC’s new health tool is PC-based and can monitor the mental stability of a workforce while flagging any potential psychological problems. For Japanese management, this could prove indispensable, dealing, as they do, with one of the most overworked and stressed workforces in the developed world. (Japan is second only to South Korea in suicide rates among wealthy nations, suffering an attrition rate nearly double that of the U.S.). According to a promotional leaflet for the app, the check tool works in tandem with workers’ “attendance data” and boasts benefits including addressing “lost productivity, and lost cost reduction.”

Japanese surveillance tech also includes tools to check on the quality of train station guards’ smiles and face recognition ad boards. And retailers in Japan have tracked their salespeople with GPS tech since 2002.

These products were introduced without much fuss in the media or protest from the general population. Such deference to employers, some argue, means Japan is riper than most for a total surveillance society. (By contrast, consider the outrage in the U.S. prompted by revelations that the NSA had engaged in widespread electronic surveillance of American citizens.)

In another study from the University of Queens, Japanese employees reported feeling fatalistic about snooping by the state, although some voiced distaste for employer breaches of privacy during focus group discussions. “I don’t really care about the government collecting data on me if it is for security purposes,” was one typical response.

Such faith in authority and a lack of public debate no doubt encouraged a confident Japanese government to recently railroad a new secrets bill into law that will significantly curtail free speech. The law, which went into effect last week, makes it a crime to divulge any secret the Japanese government deems vital to state security. Officials have refused to elaborate on what categories of secrets they are referring to, rendering investigative journalism and whistle-blowing nearly impossible, with offenders facing 10-year jail terms. Spirited dissent from the opposition came too late.

Prime Minister Shinzo Abe has argued that the new security measures are necessary to plug a notoriously leaky government machine, which prevents the U.S. from sharing intelligence with Japan.

But, as Kwansei University’s Abe points out, a burgeoning cold war with North Korea and China has thrown Japan into new moral panic, sending the state to look to technology to make itself feel safe. Foreigners are now electronically photographed and fingerprinted at Japan’s borders. NEC is also currently working on border control technology that will make “fortress America” look like a ring of roses, according to one source who was not authorized to speak publicly on these matters.

“So the market for surveillance in Japan is very attractive for electronic companies like NEC, Sony (SNE), and Panasonic,” says Kwansei University’s Abe.

Gripped by fear of war, terrorism, and crime in general, there has never been a better time to sell total surveillance to what is one of the safest countries in the world. Yet Japanese people contend they have much to fear, contrary to the facts. “Japan tends to evaluate risks using two level scales: ‘safe’ and ‘not safe.’ Often there is nothing in-between,” says Ivan Poupyrev, a researcher who lived in Japan for 15 years.

In fact, the country has a very low crime rate that has been declining over the last 60 years. Japan’s particularly successful brand of social cohesion has resulted in densely crowded cities — like Tokyo — where it is common to see children as young as six walk home alone in apparent safety. Although those same children are often subject, like nowhere else in the world, to electronic surveillance, tracked by special GPS software provided by mobile networks to anxious parents.

Rather than being “empowered by innovation,” as NEC would have it, Japan might be the first nation to be “enslaved by innovation” given that so few of its citizens care about their rights. No matter the intentions, such snooping opens the door to abuse. Nothing is being done to stop such behavior. The maxim that Japan is a “nation of sheep ruled by wolves” never seemed so apt.