How we became entrepreneurs in Somalia 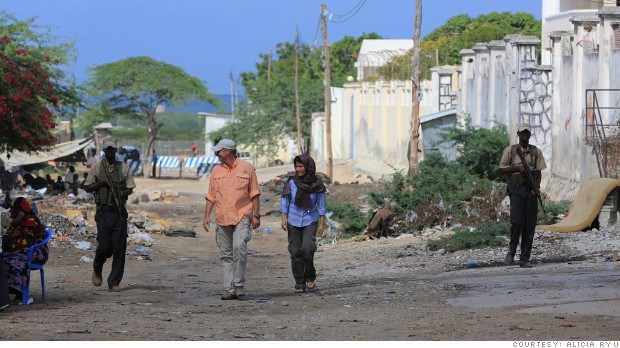 The names of the Somalis who work at the Aran Guest House in Mogadishu — one of the few in the city with security robust enough for overnight stays for international visitors — may well be little remembered by diplomats, aid workers, and the occasional businesspeople who pass through here.

And that’s unfortunate because their simple stories of employment as drivers, guards, cooks, waiters, and cleaning staff offer up a lesson for policymakers focused on how best to grow economies and address persistent poverty, whether in Africa or in Asia. Increasingly, the private sector, encompassing brave entrepreneurs as well as established, deep-pocketed corporations, can play a critical role in fighting poverty, and it can be done in a way that is quite frankly good for business — and far more sustainable than aid packages subject to donor fatigue and annual budget cuts.

That was certainly the story I heard when I had the chance to sit down with Alisha Ryu and David Snelson, the two American business pioneers behind the Mogadishu guesthouse and security firm, which employs nearly 40 Somali men and women, and by a conservative estimate, indirectly supports another 400 extended family members.

Ryu, a former combat journalist, and Snelson, a retired U.S. Army warrant officer, have been living and running their business in Mogadishu full-time since 2011. They were in the news recently for digging up and returning to the United States the remains of a helicopter shot down and made famous in the book and blockbuster Hollywood film Blackhawk Down. Both recount the American military raid to capture a Somali warlord in Mogadishu, which sparked a deadly battle that killed hundreds of Somalis and 19 Americans 20 years ago this October.

Sadly, that battle was just one of many tragedies that has engulfed this restless, Horn of Africa nation. Since then, Somalia has been ravaged by clan warfare, and feared worldwide as a breeding ground for pirates and al-Shabaab militants. Al-Shabaab again captured global headlines with a terrorist attack on a landmark shopping mall in Kenya this September, killing more than 65 people.

Clearly, investing in Somalia is not for the fainthearted. The World Bank 2014 Doing Business report — the latest annual assessment of the ease of doing business in economies around the world — once again skips Somalia entirely. Lawlessness in many parts of the country and a general inability to gather reliable data are undoubtedly two factors why Somalia continues to be absent in the report.

But Ryu says she and Snelson took a calculated risk in opening a business in Somalia because they both had spent many years working in the country and knew the opportunities and the pitfalls well in advance.

“It was, and still is, our hope that by showing it is possible to do business in Somalia in a smart, knowledgeable way, others will follow our example,” Ryu says.

Both Ryu and Snelson note that whether in Asia, Africa, or the U.S., it will be small businesses and entrepreneurs — regardless of nationality — who will drive long-term change and job creation. “Business investments that can make money and simultaneously empower communities at the grassroots level are key to economic growth and the reduction of poverty-related violence in Somalia and everywhere else in the world,” Snelson says.

That is not to say that government cannot play a contributing and enabling role. In June, for example, the United States announced “Power Africa,” an initiative focused on increasing electricity access in Ethiopia, Ghana, Kenya, Liberia, Nigeria, and Tanzania. Companies such as General Electric (GE) and Symbion Power will reportedly complement the $7 billion initiative with an additional $9 billion in commitments.

Beyond electricity and other crucial infrastructure investments, however, much of Africa also needs a sustained commitment to battle corruption and cronyism.

For nearly four years, I served as the U.S. Ambassador to and board member of the Asian Development Bank (ADB) — an international financial institution focused on poverty reduction and infrastructure investments, much like its sister institution the African Development Bank — and there too, Ryu and Snelson’s message would have great relevance.

While development banks and aid agencies can provide incremental help, it is good governance and a strong rule of law that are critical to businesses and essential to drive long-term growth. Easier said, though, than done.

Time will tell if the efforts of people like Ryu and Snelson, and others, will be sustainable, particularly in the face of seemingly ever-worsening news out of Somalia.

One clear lesson from my time in both the corporate and diplomatic worlds is that the private sector must be a critical partner if we are to sustainably lift people out of poverty. Yet, too often, inept bureaucracy, poor or poorly enforced regulation, interventions by government and endemic corruption get in the way. These challenges of the “little bric” may well be a longer-term constraint to growth and one of the biggest impediments to building better lives for people everywhere, including in the most fragile and conflict-affected states in Africa and Asia.

Few may have the nerve, or the heart, to do what Ryu and Snelson are trying to do in Somalia — building a business that can turn a profit while promoting economic growth. But by creating jobs for three dozen Somalis who would otherwise be prey for pirates and religious extremists, perhaps they offer a bit of hope and an example that a small business can have an impact, regardless of how long or how fleeting, even in the most troubled places in this world.

Curtis S. Chin served as U.S. Ambassador to the Asian Development Bank under Presidents Barack Obama and George W. Bush (2007-2010). He is a managing director with advisory firm RiverPeak Group, LLC, and a board member of World Education Services and Community & Family Services International.