Why stocks soared on the taper 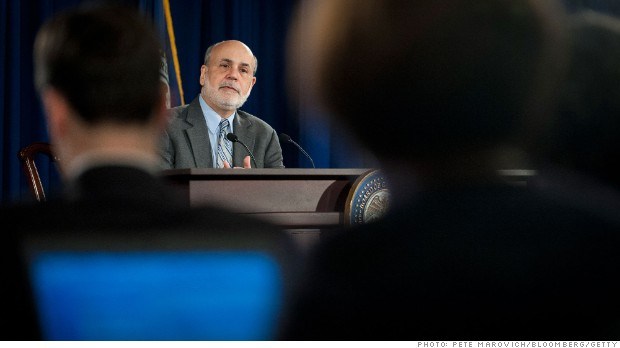 The Federal Reserve’s taper may turn out to be a lot less terrible than we thought.

For more than a year, investors have been bracing for the beginning of the end of the Fed’s stimulus program. So on Wednesday when the Fed finally announced it would pull back a little, how far did stocks fall?

Instead, they rose, a lot, by nearly 300 points. Bonds were down slightly. What gives?

The taper, it turns out, for the stock and bond market — and perhaps even the economy altogether — matters a lot less than we thought.

One of the main concerns about the Fed pulling back on its bond buying program is that it would cause interest rates to rise. But that was bound to happen anyway. Interest rates tend to rise when the economy improves. And the economy has been improving. So interest rates are up. The yield on the 10-year U.S. Treasury bonds has risen to just under 3% from around 2% at the beginning of the year. It’s not clear how much that has to do with the taper.

Even more important, that rise in interest rates doesn’t seem to be slowing the economy. Last month’s jobs report was once again better than expected, and the unemployment rate fell to 7%, the lowest it has been in five years. So clearly higher interest rates are not spooking the economy.

And the taper, at least so far, is tiny. The Fed is only reducing its bond buying program by $10 billion. That means the Fed will be buying 11% fewer bonds than we thought. Of course, the Fed is likely to pull back further. But even if they do, it will be a long time before that makes a big dent in the Fed’s total bond holding, which is expected to cross $4 trillion this week.

There has been a debate over what matters more in the Fed’s bond buying program: the stock or the flow — how much bonds the Fed has, or how much it is buying. Recently, economists have come to the conclusion that the flow matters more than we thought. But perhaps not that much more.

And then there’s stocks. Some strategists have long contended that the only reason the market has been going up, or at least going up as much as it has, is Ben Bernanke. If that was true, then the announcement that the Fed will be pumping a little less money into the market should have made stocks drop, not rise.

What this says, at the very least, is that the recovery in the market, and perhaps the economy as a whole, has less to do with the Fed than we thought. Instead, it appears that the market is rising because the economy is improving, and in the end that’s what matters. Compared to that, whether the Fed tapers or not just isn’t nearly as important.