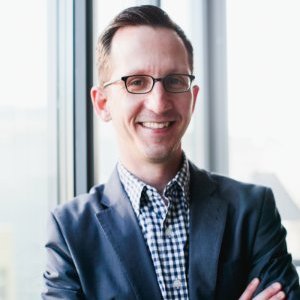 You may not have heard of LearnVest yet, but your financial planner likely has.

The startup that Alexa von Tobel launched in 2009, initially as a budget-help website directed at women, has pivoted slightly in its time. What began as online-only content and tools now revolves around one-on-one service from an army of certified financial planners. Like the room rental service Airbnb, LearnVest is a startup for which its website is only a vehicle for eventual human interaction.

Von Tobel, one of Fortune‘s 40 Under 40 “Ones to Watch” this year, says the reason for her focus on planners is that automated help isn’t enough anymore. Consider a dual-income family without children, for example. “What felt like surplus money before, suddenly they have two kids and buy a house, now they’re freaking out and they feel like they’re broke,” she says. “They don’t want content, they want painkillers.” That comes courtesy of personalized service from an experienced human being who can pore over their finances and offer them a tailored plan to spend better and save for the future.

MORE: Netflix refashions itself for the small screen

The repositioning has been successful. In July, LearnVest raised almost $20 million in new funding from investors such as American Express Ventures (AXP), bringing the site’s funding to nearly $45 million in total. The company has also distanced itself from its female-dominated database, and now counts 35% of its membership as male. Nearly half of all members join as a couple; nearly 25% are young singles seeking financial assistance.

Growth in a company’s customer base begets growth in the database. Which is why LearnVest has hired David Lennie, the director of data science and engineering for movie streaming giant Netflix (NFLX), as its new senior vice president of analytics, Fortune has learned. His task come Jan. 6: helm its growing treasure trove of personal financial data.

“LearnVest works with a tremendous amount of data that speaks to the financial state of people nationwide,” von Tobel says. The company aims to leverage the data culled from its members through subscriptions — not something it has fully explored in years past.

“I think it’s been more of an ad hoc effort, to be honest,” Lennie says. “But they’ve realized it’s time to invest in this area to drive product direction as well as corporate strategy. So this isn’t an IT function, this is data as a central asset to product, marketing, and overall corporate strategy.”

When Lennie joined Netflix five years ago, the company was just beginning the transition from DVD-by-mail company to content-streaming company. “With streaming, you suddenly had this incredible density of data per customer,” he says. “Their analytical systems had grown organically but never by design. So I got brought in to help build that out.” LearnVest is facing a similar opportunity.

This, Lennie says, is what excites him about LearnVest and convinced him to leave Netflix. “They wooed me. I wasn’t actively looking,” he says. “I liked the challenge of finding something that was approachable and relatable, and making what was otherwise off-limits to most people somehow accessible. They don’t have all of the answers yet; LearnVest is actively changing its product. There are certainly other consumer finance apps and people targeting solutions in this space, but no one else seemed to be targeting the 99%. Most of the solutions out there are targeting wealthy people to make them more wealthy.”

Competitors include MoneyGuidePro and eMoney Advisor, which occupy the financial planning software category; Credit Sesame and Mint.com, which are positioned for general money management; and HelloWallet, a business resource intended to help employees manage their spending. But, von Tobel says candidly, most of the products by LearnVest’s competitors “are so bad that even I can’t understand it, and I’m a financial planner.”

For that reason, Lennie — “an analytics powerhouse,” von Tobel says — is a key hire, and an exclamation point on the 80 hires the company has made in 2013. He brings to the company “not only his knowledge of big data but also his expertise in subscription services,” which will play into the company’s greater goal of “making financial advice a non-luxury product.”

Will customers pony up for a service that costs between $300 and $500 per year? With the data at his fingertips and a new team at his disposal, it’s safe to say that Lennie will be the first person to find out.

Correction, December 17, 2013: Because of an editing error, the original version of this article overstated the price range of LearnVest’s services. They are more accurately between $300 and $500, not $100 and $600.