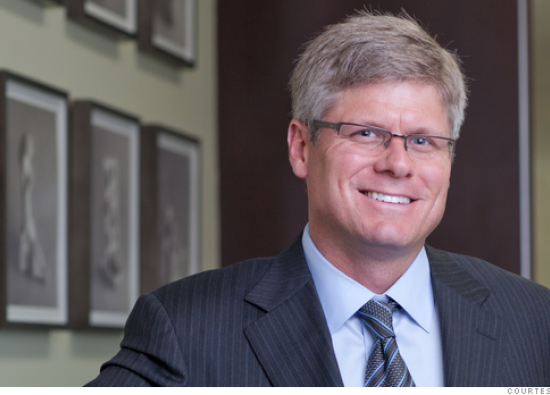 If you hadn’t heard much about Qualcomm (QCOM) COO Steve Mollenkopf until last week, you’re not alone. On Thursday, Bloomberg reported that Microsoft (MSFT) was seriously considering the longtime wireless executive for its top job, along with a long list of potential successors, including former Nokia head Stephen Elop, Ford CEO Alan Mulally, and current Microsoft execs Satya Nadella and Tony Bates. The following morning, it was announced that Mollenkopf would indeed ascend to the CEO spot — but at Qualcomm, not Microsoft.

From the outside, the announcement came swiftly and unexpectedly. According to Qualcomm’s Paul Jacobs, however, the succession plan has been in the works for a while and was only sped up by a couple of years. “He’s just the right guy,” Jacobs told Fortune. “He’s been in the Qualcomm culture for so long. He’s helped define it. This is a very smooth transition plan.” Jacobs will step down in March and will remain on board as executive chairman.

Jacobs wouldn’t utter the name “Microsoft” on the call. But it’s clear that whatever talks Mollenkopf and Microsoft were engaged in, it added a sense of urgency to Qualcomm’s succession plan. The move is notable not just because Mollenkopf will be just the third CEO in Qualcomm’s nearly 30-year history, but he’ll also be the first leader whose last name isn’t Jacobs. The company’s founding chief executive, Irwin Jacobs, served until 2005. Then his son Paul took over.

So what’s so special about Mollenkopf? He’s young — just 44 years old — but has spent his entire career at Qualcomm. His background is in electrical engineering. (He holds patents in “power estimation and measurement, multi-standard transmitter system, and wireless communication transceiver technology.”) As head of the company’s chipset business, he helped build Qualcomm into the world’s largest wireless chip supplier. In other words, he’s the closest thing to a Jacobs family member that Qualcomm could have at the helm.

That continuity is extremely important for Qualcomm’s management team and board. It’s also reflective of the company’s culture: Many of Qualcomm’s other top executives have also been there for decades. That preference for stability seeps into its business strategy, too: Though the chipmaker constantly tries to push its components into new markets, it has maintained a sizable presence (and revenue stream) by shunning the retail limelight and choosing to be a supplier, profiting off the efforts of nearly the entire technology industry, rather than a single vendor. Qualcomm chips are found in many top smartphones, including those from Apple (AAPL), Samsung, and LG Electronics.

Which means Qualcomm is more concerned with maintaining its nerdy, innovative culture; attracting and retaining the right talent at its San Diego-based headquarters and elsewhere; and, most importantly, pushing for its next big market. (Hint: pretty much anything and everything Qualcomm can embed its chips into.)

MORE: For Workday, payback comes at a price

“Mr. Mollenkopf is a Qualcomm veteran who has worked closely with Dr. Jacobs in an executive role for many years; we thus expect virtually complete continuity of strategy and execution,” said a recent report from Goldman Sachs. “Moreover, Mr. Mollenkopf is well known to investors and other stakeholders in the company, and is highly regarded by employees and the broader industry alike.”

Mollenkopf also has a “wicked” sense of humor, according to current CEO Jacobs. And he’s a self-proclaimed gadget freak: “We’re a very engineering driven culture,” Mollenkopf told Fortune in a recent interview. “All the senior execs are technical, and we’re technology lovers. So Paul’s a gadget freak, and I’m a gadget freak, I would say.”

According to Mollenkopf, deciding to stay at Qualcomm was an easy choice to make. And while he may have become more of a household name if he’d gone to Microsoft, steering that behemoth toward the right course might have proven a much tougher and insurmountable challenge. Qualcomm rakes in $25 billion each year powering many of the world’s smartphones and tablets without most of their owners knowing its name. Its incoming chief executive is unlikely to change that — even if his name rose to the top of the technology headlines last week.