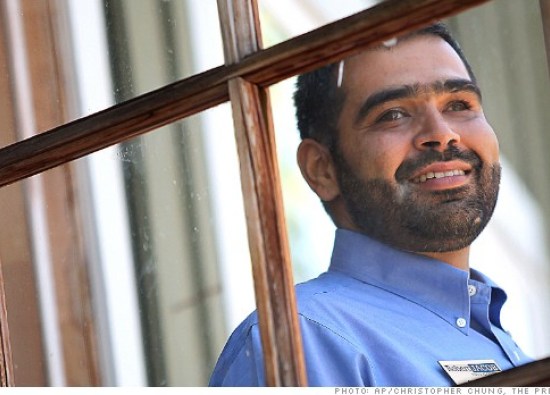 On Dec. 3 Robert Jacob, who runs the Peace in Medicine dispensary he founded in 2007 in Sebastopol, Calif., was unanimously named that town’s mayor by its five-member city council. Jacob, 36, previously had been elected to the council by popular vote in November 2012. He appears to be the first dispensary owner to become the mayor of an American town.

In a September 2009 Fortune cover story about the medical marijuana industry entitled “Is Pot Already Legal?” I noted that for my aesthetic taste, Jacob’s Peace in Medicine facility was the most inviting dispensary I toured during my research. The facility was housed in a “handsome, freshly painted house,” which was “the former sales office for a Ford dealership.” In 2011 Jacob opened a second Peace in Medicine outlet in nearby Santa Rosa.

Though Jacob’s selection as mayor marks a victory of sorts in the normalization of popular attitudes toward legalized cannabis distribution — and has been saluted as such by the medical marijuana advocacy group Americans for Safe Access — it is also true that Sebastopol is not exactly Peoria in terms of providing a reliable barometer of Middle American sentiments and mores. A town of about 7,500 located about an hour north of San Francisco, in Sonoma County, Sebastopol is a famously progressive town. It long ago declared itself to be a “nuclear-free zone” and, this past May, became the second of what are believed to be just two communities in the country to require that all new residential or commercial home construction incorporate some use of solar panels. (The other is Lancaster, Calif., north of Los Angeles.)

Other ordinances currently under review by the town, Jacob told me in a recent interview, include one that would impose restrictions on drive-through businesses, which are believed to cause traffic congestion and, due to all the idling cars, excessive greenhouse gas emissions. The town is also considering an ordinance to restrict the location and permissible number of “formula-based” businesses — those that employ similar menus, business practices, and employee uniforms at numerous, geographically distributed outlets. Though the town already has restrictions on fast-food establishments, the new limits on “formula-based” businesses might also reach hotel, motel, ice cream, and coffee shop chains, for instance, like Starbucks (SBUX) or Holiday Inn.

Jacob grew up in Rodeo, in the East Bay region of San Francisco. He was the son of an ethnically Mexican father and an Assyrian mother who was born in Baghdad. Jacob, who is gay, moved to San Francisco when he was 15, and stayed there until he was 26, when he moved to Sebastopol. Though he never finished college, Jacob worked a series of not-for-profits, dedicating his life to serving at-risk and disadvantaged populations, including homeless youth, people with HIV/AIDS, and victims of domestic violence, particularly among gay and lesbian couples.

MORE: Smoking legalized marijuana can still get you fired

The federal government’s attitude toward state-approved medical marijuana dispensaries, like Jacob’s, is still evolving, enigmatic, and fickle. Harborside Health Center of Oakland, which I highlighted in my 2009 article as a seeming standout in terms of being both a well-run business and conscientious citizen of its community, is currently fending off a civil forfeiture suit that was filed against it by the U.S. Attorney for San Francisco in July 2012 — a suit that could potentially shut down and seize everything its owner, Steve DeAngelo, has worked to build over close to a decade. (The City of Oakland has intervened in the suit on Harborside’s behalf.)

Jacob, however, has so far encountered no friction from the federal government.

“Somehow we’ve been blessed not to be messed with,” he says.