Determining damages in Beastie Boys v. Goldieblox would be no simple task 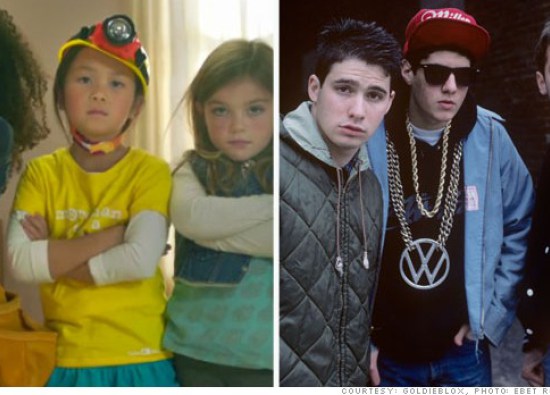 The legal spat between the Beastie Boys and the startup toymaker GoldieBlox will probably never get to a jury. But if that were to happen, and GoldieBlox were to lose, it would be no easy feat to figure out the damages the company would have to pay.

The toymaker put out a viral video last month meant to market a toy, Goldie Blox and the Spinning Machine, aimed at encouraging young girls’ interest in engineering. The video incorporated the Beastie Boys’ track “Girls,” with changed lyrics, from the group’s 1987 smash album Licensed to Ill. GoldieBlox didn’t secure permission to use the music, and the Beasties complained. It’s worth noting that member Adam Yauch, who died last year, had declared in his will that his music should never be used for commercial purposes.

The Beasties didn’t file a legal action first, however. GoldieBlox did, seeking a preemptive injunction against what the toy company said it feared would be a copyright claim. That fear was realized this week, when the Beasties and their record label, Def Jam, filed a lawsuit seeking damages equal to the amount of profit generated by the video, which was pulled after the Beastie Boys’ initial complaint. The video had drawn about 8 million views before being yanked. It was replaced with a video using different music. That one has attracted more than 1 million views.

How many sales is the video specifically responsible for? It’s really impossible to say. Even the company, which declined to comment, probably couldn’t make a decent guess. GoldieBlox was already fairly well known thanks to the Kickstarter campaign founder Debbie Sterling mounted late last year to get started. The campaign raised about $285,000.

The video was widely disseminated on social media and news sites, and according to several managers of toy stores, it seems to have goosed sales quite a bit, though they also said it had been selling pretty well before then. Another complication is that the resulting controversy and legal filings have brought even more attention to the toy. And it’s the holiday shopping season — how much has that contributed to increased sales?

The toy was released early this year. The store affiliated with the Exploratorium science museum in San Francisco (actually two stores — a third is slated to open today in Los Altos in Silicon Valley) reports that it has sold 60 units — and 35 of them just since November 20, just as the video went viral. That might seem to indicate that the video is responsible for nearly 60% of sales, but of course it’s not that simple. It can’t be known how many of those 35 would have been sold if there had been no video. The Exploratorium store (which, it should be noted, is not a high-volume retailer) is geared toward science geeks, and particularly, like GoldieBlox, toward encouraging girls’ interest in so-called STEM careers (science, technology engineering, and math). The store also held a holiday even recently, with GoldieBlox as a featured vendor. Some sales likely came from that.

“It’s just hard for us to tell” what might have motivated the most recent purchases, said store manager Rachel Hyden. Not many customers have noted either the video or the controversy, she said, but “they all seem to like the product.”

MORE: What GM’s Mary Barra must do now

Conversely, customers at one Chicago location of Marbles The Brain Store, a seven-state chain, seemed to be well aware of both the video and the resulting controversy, according to store manager Henry Riggs. “Sales were pretty decent before all this because a lot of people knew about the Kickstarter campaign,” he said. And while sales have spiked since the video was released, he said that could simply be due to the calendar, but it’s hard to know for sure. He couldn’t give sales figures, but he said the toy was the store’s No. 3 selling product.

On Amazon (AMZN), the toy as of Thursday was ranked No. 25 in sales for all toys and games, and No. 4 among “building and construction” toys. Those figures would almost certainly be even better if Amazon itself stocked the toy, but it is available on the site only through third-party vendors.

According to GoldieBlox’s website, Toys “R” Us is the only major national retailer to stock the toy. Toys “R” Us did not respond to a request for comment.

Given all the possible reasons for a sales spike since the video was released, how would a jury go about determining how much profit the video itself generated? Basically, it would come down to argument and intuition. Once the amount of gross sales has been determined, GoldieBlox would carry the burden of arguing how much of that should be discounted in order to determine damages, said Jonathan E. Moskin, a lawyer who specializes in intellectual property. “GoldieBlox may argue that at least some of the sales are attributable to the other advertising. It may also argue that other publicity and the inherent quality of the toys is the key sales driver.”

The company would likely present expert witnesses. “The Beastie Boys can then present their own expert testimony saying, ‘No, no, no: The only reason you sold these toys was that you stole our music.’ Ultimately, it is then a fact issue for the jury to decide,” says Moskin.

The likeliest outcome seems to be some kind of settlement. GoldieBlox’s claim is that its use of the song amounts to “parody,” and indeed the commercial was in part a parody of the Beastie Boys’ song, which, jokey as it was meant to be, was pretty sexist (“Girls — to do the dishes; Girls — to clean up my room”). But the boys were young in 1987, and they have since backed away from the song’s lyrics and have become known for their support of women’s rights.

Parody, as such, is generally protected under fair use rules. But the video was also a commercial advertisement, and that complicates matters. The lyrics were changed in the video to make the message all about female empowerment. It featured female tots helping to build a Rube Goldberg machine while enthusing over engineering careers (“Girls — to build a spaceship; Girls — to code the new app”). That seems to constitute parody, but the main purpose of the video was to sell toys. It’s not necessarily an easy question, but according to Moskin, the video was meant “not so much to comment on the song … but in reference to GoldieBlox itself. It is an advertisement for GoldieBlox, not social commentary.”

Whatever the outcome of the case, the main public reaction for now seems to be sadness that the situation has gotten this far. Riggs, manager of the Marbles outlet in Chicago, said many of his customers are fans of both parties. “Before all this, the product had so much support,” he says.

And each side has expressed support for the other, though that support clearly hasn’t been enough to keep them out of court. In their letter complaining about the use of “Girls,” the Beasties wrote to GoldieBlox: “We were very impressed by the creativity and the message behind your ad.” And GoldieBlox told the Beasties on its blog: “We don’t want to spend our time fighting legal battles. We want to inspire the next generation. We want to be good role models. And we want to be your friends.”