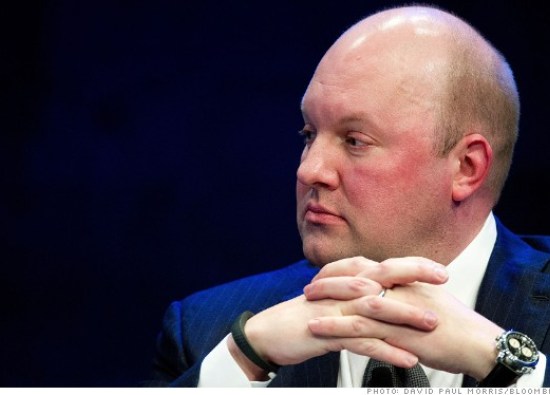 Andreessen Horowitz is buying into the growing market for bitcoins.

The prominent Silicon Valley venture capital firm co-led by Marc Andreessen, the Netscape co-founder, is investing about $20 million into Coinbase, which provides “wallets” for the digital currency. The wallets allow users to buy and sell bitcoins as well as spend them.

The firm is the lead investor in a “Series B” round funding for Coinbase. Other investors, including Union Square Ventures and Ribbit Capital, are kicking in an additional $5 million. Coinbase is getting a total of $25 million in new funding.

Union Square was part of an earlier round of financing that raised $5 million for Coinbase. As part of the current deal, Andreessen Horowitz’s Chris Dixon and Union Square’s Fred Wilson will be joining Coinbase’s board of directors.

Coinbase marks Andreessen Horowitz’s first major investment into a bitcoin-related company. Dixon said the timing of the investment was in part motivated by a recent Senate hearing that produced statements from Fed Chairman Ben Bernanke and other regulators that seemed to back the virtual currency. But Dixon said he has been watching the bitcoin market for a while.

Back in October, Andreessen said that the firm was scoping out investments. At Fortune’s Brainstorm Tech this summer, the VC firm’s other co-founder Ben Horowitz said he thought bitcoins would go mainstream.

“The existing way to pay for things online is broken,” says Dixon. “It has high fees, and the fact that fraud is such a problem shows that the technology that banks, credit cards, PayPal, and others use is based on antiquated technology.”

Coinbase has 600,000 users, who can link their bank account to a virtual wallet to buy bitcoins. Other services require users to wire cash to foreign countries in order to buy the digital currency. The company has also signed up 16,000 merchants that will accept bitcoins through Coinbase’s payment system.

MORE: How to bet against the bitcoin megabubble

Dixon says Coinbase has worked with regulators and banks to ensure that its system is safe. Dixon says the company is an example of how the bitcoin marketplace is maturing. “Lots of hobbyists have been interested in bitcoin for a while, but what you are seeing now is a more professional class of Silicon Valley-style entrepreneurs getting involved,” says Dixon. “I expect and hope to see more companies started.”

More and more people appear to be betting on the success of bitcoins. The value of the currency has recently soared. But Dixon says his firm is excited about bitcoin as a technological advance, not as a currency play. Dixon says Andreessen Horowitz hasn’t put money into actual bitcoins.

“We don’t think people should be putting their savings in bitcoins.”