How an Icelander’s ‘Viking journey’ helped create a trivia sensation 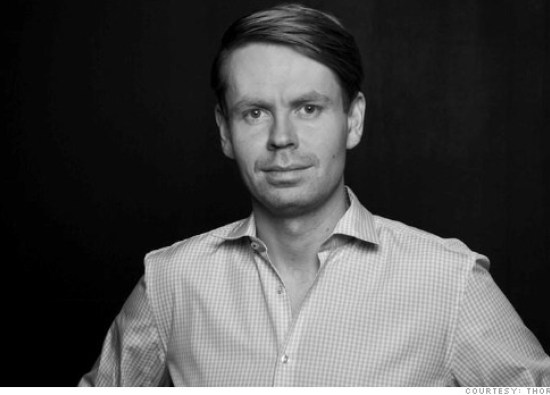 For Icelandic game studio Plain Vanilla, the last few months have been anything but boring.

The studio launched its smash iPhone trivia hit QuizUp on November 7, and quickly attracted 3.5 million registered users. Since that launch, QuizUp has bobbed in and out of the No. 1 spot in the Apple App Store, according to Plain Vanilla founder and CEO Thor Fridriksson.

For Fridriksson, this success comes after a few tough years. In 2011, his studio nearly went bankrupt after its debut title, a game for pre-schoolers named The Moogies, fell flat.

“It was a miserable failure,” Fridriksson told Fortune in an interview earlier this month. “We spent a year developing it, and within two weeks we knew it wasn’t going to make money.”

Fridriksson was forced to lay off nearly all of Plain Vanilla’s employees in the fall of 2011. Then, severely in debt, he contemplated his own future. With his Oxford MBA, he could easily get a job in finance and pay off the debt he’d accrued as part of The Moogies failure. Or would he rather take another crack at the mobile gaming industry that he still believed was ripe with opportunity?

He chose the challenge.

This time around, Fridriksson looked at popular games like Words with Friends and Draw Something, two hit titles that didn’t reinvent the wheel. Both massively successful games modified an existing analog game (Scrabble and Pictionary, respectively) and brought that experience into the mobile environment.

Fridriksson looked for inspiration. While a mobile version of Trivial Pursuit existed, Fridriksson found it to be rudimentary, lacking a wide range of topics and cut off from social opportunities.

“Trivia is one of the most inherently social things I can think of,” he says. “No one wants to sit in a dark corner and read Trivial Pursuit cards.”

“Watch a game show — people yell out the answers because they want to show people how much they know.”

What Fridriksson imagined was not a trivia game but a trivia platform: Users could submit their own questions, gain points and titles from their victories, and interact with one another in one-on-one and group discussions.

Fridriksson’s only problem was that he had no money to build such a platform. Realizing he wasn’t going to find a reservoir of deep-pocketed venture capitalists in Iceland, Fridriksson decided to gamble. He hired two programmers, applied for a three-month tourist visa to the U.S. and bought a one-way tickets to San Francisco — a city where he knew no one.

“We thought at the time that in San Francisco, they just threw money at you,” Fridriksson says. “Oh how we were wrong.”

For the next three months, Fridriksson scoured the Bay Area for seed funding while his programmers built him a prototype to show investors. While the unknown Fridriksson struggled to find a VC audience, he sought out a fellow Icelander in San Francisco named David Helgason, the CEO of game development company Unity Technologies.

“There are only 330,000 of us,” Fridriksson said. “It’s easy to connect with another Icelander outside of Iceland.”

Helgason liked Fridriksson and his idea for QuizUp, and he agreed to become an investor. After that, Fridriksson says, the pieces started to fall into place, and other investors slowly came onboard before Fridriksson’s visa ran out. Before he returned to Iceland, he was able to secure $1.2 million in seed funding. After his initial trip to San Francisco, Fridriksson took multiple trips between Iceland and California in 2012 and 2013. Whenever he received funding in the U.S., he’d fly back to Iceland to fine-tune single quiz games to show to investors, refining quizzes in categories like basketball or math.

Fridriksson calls these back-and-forth trips his “Viking journeys” and confessed the most important one was a 2012 trip to Los Angeles. Like he’d done with Helgason, Fridriksson cold-called producers at an affiliate of Lions Gate Entertainment (LGF) and convinced them to partner with Plain Vanilla on a trivia game for the Twilight series. The game, released in November 2012, was a hit. Almost 2 million users registered to play it, and they gave Plain Vanilla valuable feedback about a need for more social features, like discussion boards and chats.

Today, both of these features are central to QuizUp’s success. Acording to Fridriksson, QuizUp users typically play 17 quiz games per day, for around 40 minutes.

Viral success — Fridriksson set aside $1 million to market QuizUp, but hasn’t had to spend anywhere near that — has also attracted big name VCs who barely noticed Fridriksson when he showed up in California the year before, penniless and with only ideas for a prototype.

In 2013, Plain Vanilla closed two Series A rounds worth $4.5 million, receiving funds from the likes of Sequoia Capital and Greycroft Partners. With those funds, the company has increased its staff from 20 employees at the start of November to 30 today. Plain Vanilla has also opened up workspaces in New York and San Francisco, in addition to its main office in Reykjavik.

The growth won’t stop there, according to Fridriksson. Next month Plain Vanilla will release QuizUp for the Android — Fridriksson says he’s been fielding emails from legions of angry Android users — and the iPad. Fridriksson also hopes to build practice tests for standardized exams like the SAT and the GRE into QuizUp.

Even with all of the plaudits he and his company have earned over the last month, Fridriksson is quick to remind himself to stay modest. After all, it was only two years ago that he was laying off employees and accumulating debt.

“The glory is a misconception,” he says. “Most of the time you’re hanging by a thread.”