Emerging markets are more politically unstable than ever 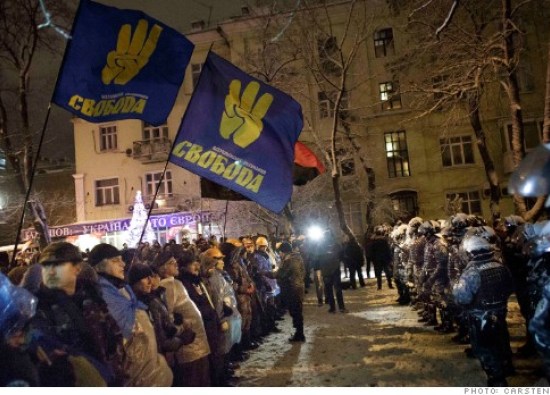 The eruption of popular protests in Thailand and Ukraine over the weekend shouldn’t be taken so lightly by emerging markets investors. The two seemingly unrelated disturbances both revolve around deep-seated and unresolved political issues, which have been simmering for years. Should either of them actually blow, the resulting toxic fallout could have dire economic consequences for their neighbors and deliver yet another pelting to investors.

The emerging markets have been particularly volatile this year with growth stalling in China and political upheavals disrupting Brazil and Egypt. Worries that the U.S. was set to curb its bond buying program earlier this year sent the MSCI Emerging Market Index plummeting in the summer, only to rebound quickly thereafter when the Federal Reserve unexpectedly decided to keep the program running at full blast. Despite the pullback by the Fed, the MSCI is still down 5.3% on the year. That compares with the S&P 500 (SPX), which has shot up a bubbly 27% during the same time period.

But the quest for yield has led investors back into the emerging markets, with billions of dollars pouring in from investors in the U.S. and Europe. Argentina’s Merval stock market has jumped nearly 70% since July, for example, while EM companies have sold a whopping $71 billion worth in bonds from June to November, according to Dealogic. Clearly, EM is back — or that is what investors have been led to believe.

Take what is going on currently in the Ukraine and Thailand, emerging market darlings for their respective orbits in Eastern Europe and Southeast Asia. Protests in both countries have quickly consumed the political and economic hearts of both countries and threaten to throw EM investors yet another curve ball.

In Thailand, corruption at the highest levels of power has stunted the peaceful nation’s economic growth prospects for nearly a decade. The people have grown tired of it and this weekend, after weeks of protests, were able to push the Prime Minister to dissolve parliament and call for new elections. Disruption continues in Bangkok as the Prime Minister has refused to step down before the elections.

In Ukraine, years of political infighting between those loyal to their former Russian overlords and those who want to forge closer ties with the European Union has left the country in economic limbo. But protests there went into overdrive this weekend after the government scrapped a trade agreement with the European Union at the behest of Russia, who wants Ukraine to remain in their orbit. Ukrainian patriots want new elections so that they can purge their corrupt government of officials who they believe put the interests of Moscow over that of the Ukrainian people. Fighting there intensified Tuesday night as protestors occupied the central square in Kiev.

But investors seemed to shrug off these two worrisome developments, indeed, the MSCI EM index actually strengthened on Monday. The Market Vectors Russia index (RSX), the largest dedicated Russian ETF, was up 0.75% on Monday, even though Ukrainian protesters tore down a statue of Lenin in central Kiev over the weekend. Thailand’s SET stock index also gained on Monday, up 0.43%.

The stronger numbers would seem to suggest that all is well, even though that is clearly not the case. It appears that some investors have developed “protest fatigue” and are choosing to simply ignore the conflagrations in Ukraine and Thailand. The fatigue emanates from the deluge of “people power” uprisings in a number of emerging markets this year, many of which simply fizzled out. Apparently, the markets believe that will be the case in these two incidents as well.

MORE: Where should you put your money now?

For example, in Egypt, the toppling of the government in a military coup didn’t send the Egyptian economy into a tailspin; indeed, it seemed to have brought order to what was a chaotic political vacuum following the toppling of Hosni Mubarak in 2011. Meanwhile, in Brazil, the so-called “Salad Revolution” this summer failed to disrupt the nation’s economic development plans in any significant way. Shortly after the protests calmed down in July, Brazil issued $3.5 billion worth of bonds to a pack of yield-hungry EM investors without a hitch.

The lull in protests in Egypt and Brazil seem to be giving EM investors a false sense of security. Indeed nothing was resolved in either country, and opposition groups remain organized. It is tempting to assume that things will just work themselves out, but the root of both protests revolve around two growing and troublesome issues — income inequality and political corruption — both of which plague a number of EM countries, including Thailand and Ukraine.

“Over the past two years, India, Russia, Brazil, Egypt, Turkey, and Indonesia have all seen their largest political protests in decades,” Citibank analysts wrote in a note to their clients Monday. “Protests often beget protests, and they become more common in the run-up to elections, which in many of these countries will occur over the next year.”

Unless there is some resolution of the core issues behind a revolt, they will simply resurface again and again until things explode. Ukraine and Thailand have been wrestling with their issues for years, and it seems that the people have finally had it. New elections in Thailand will mean weeks of further protests. Meanwhile, it seems that the Ukrainian people are determined to force an election. Elections due in Egypt to replace the military government will surely sprout new revolts there while elections in Brazil next October should make for an interesting summer.

If anything, the EM looks more politically unstable than ever.