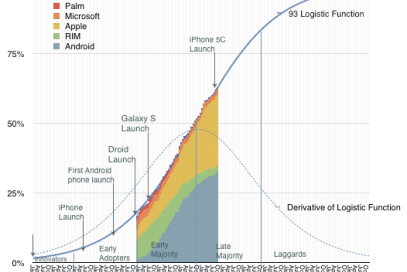 I don’t pretend to understand — even after reading the Wikipedia entry on logistic regression — the statistics Asymco‘s Horace Dediu used to draw the chart at right.

But even I can see that the curves representing various smartphone platforms have different shapes:

This chart was derived from the one copied below, part of an exercise in which Dediu estimates from time to time the point at which smartphones in the U.S. — a leading indicator of global smartphone use — reach 90% saturation.

His current estimate: December 2016, three years from now. By then, 230 million Americans could be carrying smartphones.

On the road to smartphone saturation, according to Dediu, that puts the U.S. in the “late majority” stage. See below: