Steve’s leave: What does it really mean? 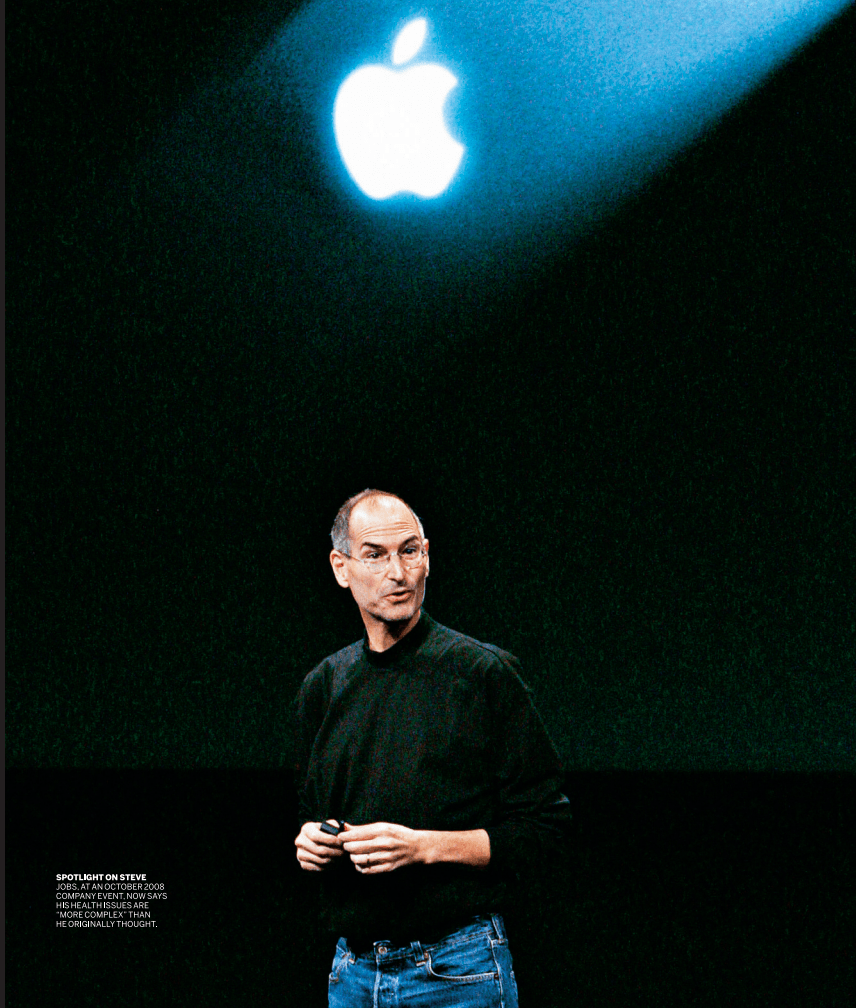 When we put Tim Cook on the cover of Fortune two months ago, shining a spotlight on the powerful, behind-the-scenes executive who labors in the shadow of a larger-than-life CEO, we posited that should Cook ever assume the top job from Steve Jobs: “Apple may not suffer from acute Stevelessness as much as the world seems to think.”

Our supposition is about to be put to the test.

Now the world’s eyes are on Cook, from competitors like Dell, Hewlett-Packard, and Microsoft to Apple’s legendary legions of loyal customers. In mid-January, Jobs finally acknowledged what Apple watchers have feared for months: Five years after being diagnosed with pancreatic cancer, he’s not completely well. As a result, Jobs is taking a six-month medical leave of absence from Apple. In an e-mail message to employees, he said his “health-related issues are more complex” than he’d previously thought. He also said that he’d tapped Cook to “be responsible for Apple’s day-to-day operations,” and that he, Jobs, would weigh in on “major strategic decisions” and remain CEO.

Jobs’ every utterance is scrutinized for its true meaning, so here’s what’s interesting about his note, which was very much intended for public consumption: Cook, who is Apple’s chief operating officer, has been running Apple’s daily affairs for years. What has changed, then, is the degree to which Jobs will be involved. In other words, if Apple and Cook—as well as the tech world—are ready for Life AfterSteve, the test phase has begun. It’s even possible that Cook has started his own public audition to be Apple’s permanent chief executive.

Until recently the world outside of Apple assumed that Cook wasn’t CEO material. Sure, the 48-year-old Alabamian had stepped in for Jobs on an interim basis in 2004 when the Apple co-founder underwent surgery. But the outside perception of Cook was as merely an operations wonk—the guy who makes the trains run on time—not the visionary to replace Jobs should the need arise.

What people have come to understand is that Cook has hoovered up so much responsibility at Apple that no one else’s authority—save Jobs’—comes close. “The company already has coalesced around him,” says a top Apple executive, who spoke on condition of anonymity. This executive adds that Cook’s mild-mannered, unemotional approach to business actually makes him a welcome relief to dealing with the mercurial Jobs. “Tim does almost nothing that would make you disrespect him, which you can’t always say aboutSteve,” he says.

Cook has vastly expanded his horizons in the decade since he joined Apple. When Cook arrived in 1998 from Compaq, Apple was badly bruised. His job was to tidy the company’s messy supply-chain apparatus. He has since taken charge of all operations, sales, customer support, the Macintosh division, the company’s online store, and the important task of managing Apple’s relationships with the phone companies that carry the iPhone. As a board member of Nike, the athletic Cook has enhanced his operational experience with oversight of a world-class marketer from a different industry. Says Jeanne Jackson, a veteran retailer who sits on the boards of McDonald’s and Nordstrom, in addition to Nike: “I think the Apple shareholders are well served by Tim, with their interests in the hands of an intelligent, thoughtful, and disciplined leader.” (For more on Cook’s leadership style, see “The Genius Behind Steve” on Fortune.com.)

The fear, though, is that Apple has thrived because of the genius of Jobs—thoughtfulness and discipline be damned—and that the company will crumble without him. (The stock slid 14% and lost $12 billion in market value from mid-December, when Jobs triggered investor concerns by canceling his appearance at the annual Macworld conference, to mid-January, when he disclosed his leave.) In fact, Apple insiders say that in recent years Jobs has narrowed his interests to the subjects that truly excite him, including design, advertising, marketing, public events, and key products like the iPhone and iPod—leaving the rest to Cook. And of course Apple has built its own computer operating system, integrated hardware and software, and entered and disrupted entirely new industries like music and telephones. “Those aren’t core competencies that you can go out and buy or organically grow in a reasonable amount of time,” Cook said recently, according to someone who knows him.

Jobs is taking a six-month medical leave and putting Tim Cook in charge of daily operations. The test phase of Life After Steve—and Cook’s tryout for the job of Apple CEO—has officially begun.

Indeed, it is unlikely that Jobs’ absence will have any impact on the company’s near-term plans, given that Apple famously and secretively plots its products years in advance. The iPhone, for example, was at least three years in the making. According to someone familiar with the Apple executive team’s thinking, “major strategic decisions” include big acquisitions, other large outlays of cash, and entirely new product categories. The odds that Jobs hasn’t already signed off on such matters for the next handful of months or so are low. Apple declined to make Jobs or Cook available for comment.

Still, partners and competitors, and even the larger business community, must be contemplating what their worlds will look like without the hugely influential Jobs on the scene. He sits on the board of Walt Disney Co., which acquired his Pixar in 2006, and has become an important advisor to CEO Robert Iger. “He’s the CEO. My job is to help him however I can,” Jobs told Fortune about Iger in mid-December. “I love chatting with him about things.” And Jobs’ perfectionism has left an indelible imprint on the business world. His desire to create a better retail experience, for example, led to the Apple stores, and spawned copycats such as AT&T’s “experience stores.”

Even before the disclosure of Jobs’ leave from the company he co-founded in 1976, the chatter in the Apple blogosphere has been that the company’s innovation had slowed. It’s been two years, after all, since the introduction of the iPhone, Apple’s last revolutionary product. While accurate, it’s a bit of a stretch to suggest Apple’s innovative days are behind it. The company has had three truly game-changing products: the Macintosh in 1984, the iPod in 2001, and the iPhone in 2007. Each upended an established industry. Each arose secretly from scratch in Apple’s design labs.

Apple, of course, doesn’t say what it’s working on. That’s why there’s a whole cottage industry that speculates on where Apple will go next. Sanford Bernstein analyst Toni Sacconaghi, for example, has identified three areas he thinks could add up to an additional $15 billion in annual revenue: cheaper Macs, iPhones that don’t require their buyers to sign up with an Apple-approved wireless company, and, most significant, a combo DVR/cable box/home-entertainment hub that would be a major improvement over the company’s fledgling AppleTV product. “With its 100-million-strong iPod/iTunes user base, expertise in hardware, software, and content integration, and skill in developing intuitive user interfaces, Apple appears uniquely positioned to deliver a true digital home experience,” Sacconaghi recently wrote in a note to clients. Gene Munster, an analyst with Piper Jaffray, guesses that Apple’s next big projects will be related to new mobile products (“They really like the idea of a ‘computer in your pocket,'” he says) and a major international retail-stores expansion, noting that Apple hasn’t yet graced the French with its presence and has only one store in all of China.

Jobs is stepping back at what would have been a difficult time anyway. As Fortune went to press, Apple was due to report earnings on Jan. 21, with investors bracing for weaker Mac and iPhone shipments. Even before Apple reported, signs of distress were visible everywhere in the electronics industry. Hard-drive maker Seagate removed its top executives and slashed its workforce, Apple chip suppliers Intel and Nvidia sharply lowered financial guidance, and a beleaguered Sanyo agreed to sell itself to Panasonic. Researcher IDC recorded a slight year-over-year decline in worldwide fourth-quarter PC shipments, the first such drop in six years.

Still, Apple enters the slowdown in a position of strength, with nearly $25 billion in cash on its balance sheet at the end of September. Investors betting that Apple without Jobs will continue to turn out hits have the opportunity to buy the stock at $83, down from almost $203 in late 2007. A full $27 of that stock price is net cash, estimates UBS analyst Maynard Um.

For years Apple’s share price has benefited from a “Jobs premium.” The company’s board of directors now has to deal with the fact that investors don’t know quite what to think, especially given the ambiguity of Cook’s position. “They’ve got to clarify who’s in charge,” says Jeffrey Sonnenfeld, the noted management professor at Yale. “It’s not good for Tim. It’s not good for Steve. It’s not good for the company.” Sonnenfeld suggests that Jobs should become chairman, what he calls a “legitimate ambassadorial” role that would permit the current CEO more privacy, and that Cook be formally named CEO. Apple’s board has no chairman, which is unusual. Instead, Intuit’s Bill Campbell and Genentech’s Art Levinson (chairmen of their companies’ respective boards) are Apple’s “co-lead” directors, whatever that means. Campbell and Levinson declined to comment for this article.

Interestingly, some of the executives closest to Jobs expect him to return to work, as he says he will. “Six to nine months from now, when he comes back, Tim will have shown what the company can do and that Steve doesn’t have to be involved with every single thing,” says one senior executive, who has worked closely with Jobs and Cook. Another executive says that there’s only one way Jobs can halt the talk about his demise. “All that will change things is for him to gain weight and have an event to announce a fantastic new product,” says this executive, who regularly speaks to and meets with Jobs. As all of us would surely agree, it should only come to pass.

This article is from the February 2, 2009 issue of Fortune.