The Next Big Thing: A Bookstore? 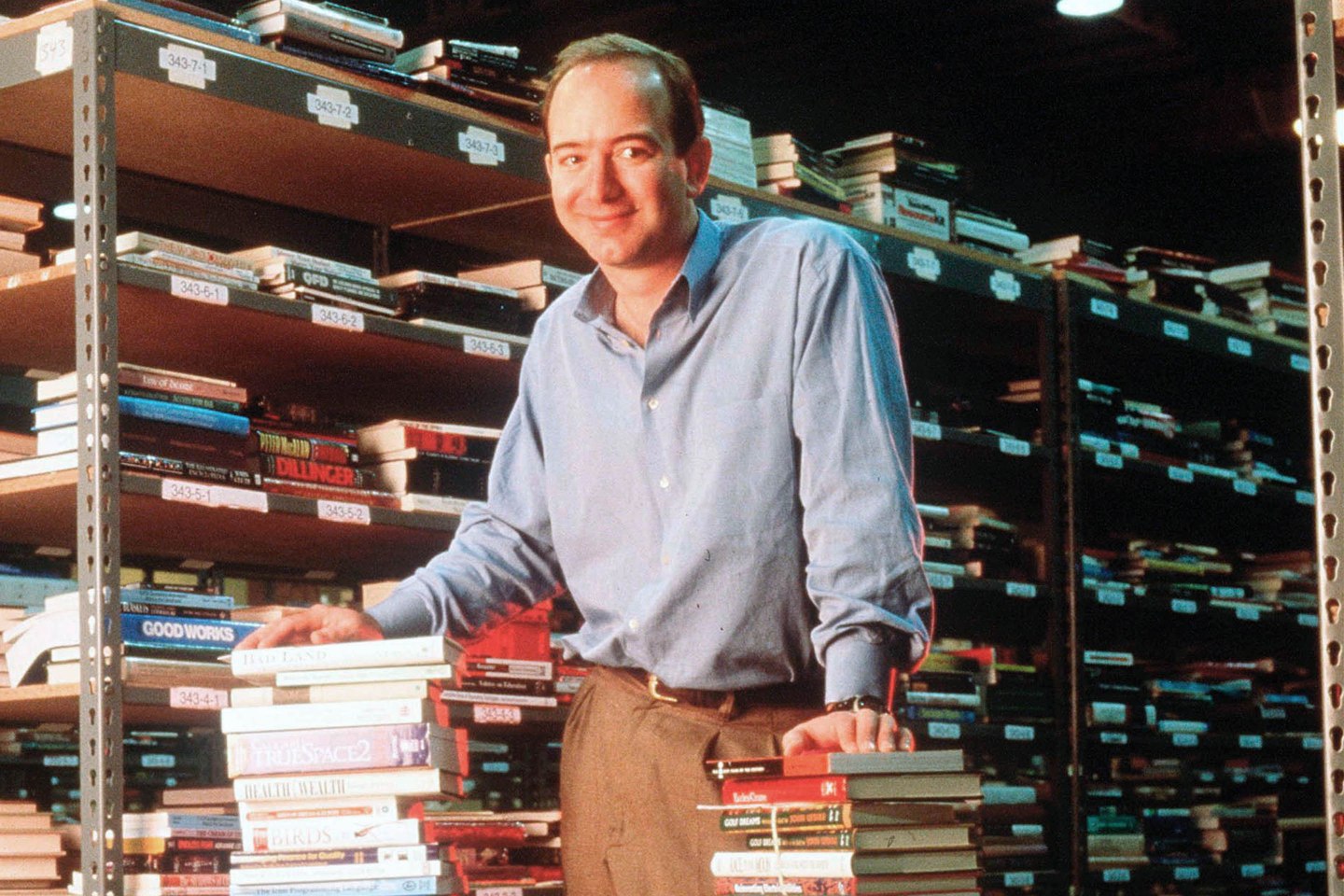 Back in 1994, Jeff Bezos was a young senior vice president on the rise at a thriving Wall Street hedge fund. But when the explosive growth of the World Wide Web caught his eye, he saw an even bigger opportunity: online commerce. Two years later Bezos, CEO of the Internet bookstore Amazon.com, is one of a crew of young entrepreneurs using cyberspace technology to steal real-world customers from traditional businesses with strong consumer and industrial franchises.

How can a small player establish a beachhead in industries as entrenched as publishing, insurance, stock trading, and Yellow Pages advertising? Start with the fact that digital businesses need little real estate. Add the power of interactive Web pages and E-mail, which provide direct links with customers. The combination is potent: In recent years, BigBook, in San Francisco, has started taking a slice of the $11-billion-a-year yellow-pages market that’s dominated by the Baby Bells; PCOrder, in Austin, Texas, offers a way to buy custom-designed computers over the Web; E*Trade, in Palo Alto, California, provides online stock-trading at discounts that undercut even Olde and Schwab. None of these outfits are profitable yet. But as they win loyal customers, they are creating models of how to use the Web to challenge much larger rivals.

Of all the Web upstarts, Bezos’s is the one the others are watching. Back in 1994, he considered getting into some of those other businesses. He drew up a list of 20 products that he figured could be sold online–including books, music, magazines, and PC hardware and software. After narrowing the list to books and music, Bezos settled on books for two reasons. First, there are more to sell (about 1.3 million books in print, vs. 300,000 music titles). Second, the goliaths of publishing seemed less imposing. While six major record companies dominate music, Bezos says, “there are no 800-pound gorillas in book publishing or distribution.” The biggest chain–Barnes & Noble–accounts for under 12% of the industry’s $25 billion in annual sales.

Carpe diem! Bezos quit his job, packed his belongings, and informed the movers that he’d call when he’d chosen among Colorado, Oregon, or Washington. His wife, MacKenzie, handled the driving westward while Jeff rode shotgun, pounding out a business plan on a laptop and rounding up seed capital via his cellular phone. He chose the Seattle area because of its proximity to both high-tech talent and a major book distributor, Ingram’s warehouse in Roseburg, Oregon. He and MacKenzie rented a suburban house; even before their furniture caught up with them, Bezos and his first four employees had set up computers in the garage, where they started writing the software that would make Amazon.com work.

He decided to call the company Cadabra, but friends thought it sounded like “cadaver.” So he opted for Amazon, after the world’s largest river–the idea being that the company would carry many times more books than conventional stores. Bezos sold his first book in July 1995.

Amazon.com (AMZN) is truly virtual. Though it has become a multimillion-dollar business that employs 110, there’s still no storefront and little inventory. Customers connect via Amazon’s Website, where they can search a database of 1.1 million books by title, author, subject, or keyword. If they find a book they want to buy, they use online forms to specify hardcover or paperback, gift wrapping, and mode of shipment. Payment is by credit card, submitted via telephone or via the Web–the transaction is safeguarded by encryption.

Orders in hand, Amazon requests books from a distributor or publisher, which delivers them to the company’s Seattle warehouse. The order is then packed and shipped. On average, customers get books five days after ordering–pay extra, and they speed the process by a day or two.

Other online bookstores operate in a similar way–but none are as successful as Amazon. Bezos says the keys to success are simple: comprehensive selection (“Our goal is that if it’s in print, it’s in stock”) and 10% to 30% discounts on most books. “It’s a huge mistake not to offer discounts,” he says. “Most online businesses fail because they mis-estimate the value proposition.”

In other words, even in cyberspace, customers want bargains. Bezos declines to disclose revenues, but analyst estimates for 1996 reach well over $10 million. He does say that orders have been increasing this year by 34% a month. And 44% of Amazon’s sales are to repeat customers, who can sign up to be notified by E-mail when, say, the next Stephen King novel comes out.

A cyber storefront opens all kinds of marketing possibilities. Amazon is one of the first sites to cash in on the Web’s so-called communities of interest. Say you’re fascinated by vintage cars, and you create a Website to share information with like-minded folks. Link your site to Amazon, and you’ll get a 3% to 8% commission on each purchase made by anyone who follows that link and buys a book. Amazon has enlisted over 1,800 such “associates” in the past three months. In the works are customized storefronts–a regular customer who tends to buy computer books will automatically be presented with the latest Microsoft programming manual when he logs in, while a mystery fan might see a tout for the latest Patricia Cornwell thriller.

Amazon.com is digging into an industry with a historically flawed way of conducting business. In traditional book publishing, suppliers and retailers work at cross purposes. Publishers have to decide months in advance how many copies of a book to print. But they can’t accurately gauge demand until they pitch the book to the retailers. To encourage retailers to accept lots of copies and display them prominently, publishers give stores the right to return unsold books for credit. Big chains like Barnes & Noble or Borders get the best deals. Retailers often over-order, since they want to be sure they have adequate stock on hand, and since loading up poses little risk. Says Bezos: “It’s not a rational business. The publisher takes all the return risk and the retailer makes the demand predictions.”

Amazon gives publishers a lot to like. Most important, since the company orders books that customers have agreed to buy, its return rate is less than 0.25%, vs. 30% for the industry overall. Publishers also are greedy for Amazon’s ability to track customer preferences and ordering patterns, the kind of data that they would love to use to forecast demand. So far Bezos has resisted sharing such information. He explains: “This is the Web. People are concerned about privacy. And if someone feels mistreated by us, they don’t tell five people–they tell 5,000.”

Like most Web retailers, Bezos says that the race is for market share first, profits later. “If we’re profitable within the next two years,” he says, “it’ll be by accident.” Early investors were told not to expect profits for five years. But that hasn’t stopped some of the sharpest Internet investors from betting big on Amazon. Venture capital firm Kleiner Perkins Caufield & Byer recently put up $10 million, its biggest single placement ever–more than its original investment in Netscape. In return, the firm received under 15% of the company and a board seat for Kleiner partner John Doerr.

Bezos is spending some of the money on staff–instead of clerks and managers, he is hiring programmers who can make his service even more efficient. He’s not laying out much for office furniture–many Amazonians’ desks consist of unfinished doors laid across sawhorses. The bulk of the company’s capital goes to increasing Amazon’s visibility, with low-cost ads on popular Websites, and more expensive spots in traditional media like the New York Times Book Review. The challenge is to create a brand as recognizable as Barnes & Noble, which is expected to go online next year. Says Bezos: “Frankly, I’m more concerned about two guys in a garage.” All the same, he’s taken precautions, including using the lure of stock options to cherry-pick book-industry managers. “By the year 2000,” he says, “there will be two or three big online bookstores. We need to be sure we’re one.”

A version of this article originally appeared in the Dec. 9, 1996 issue of Fortune.