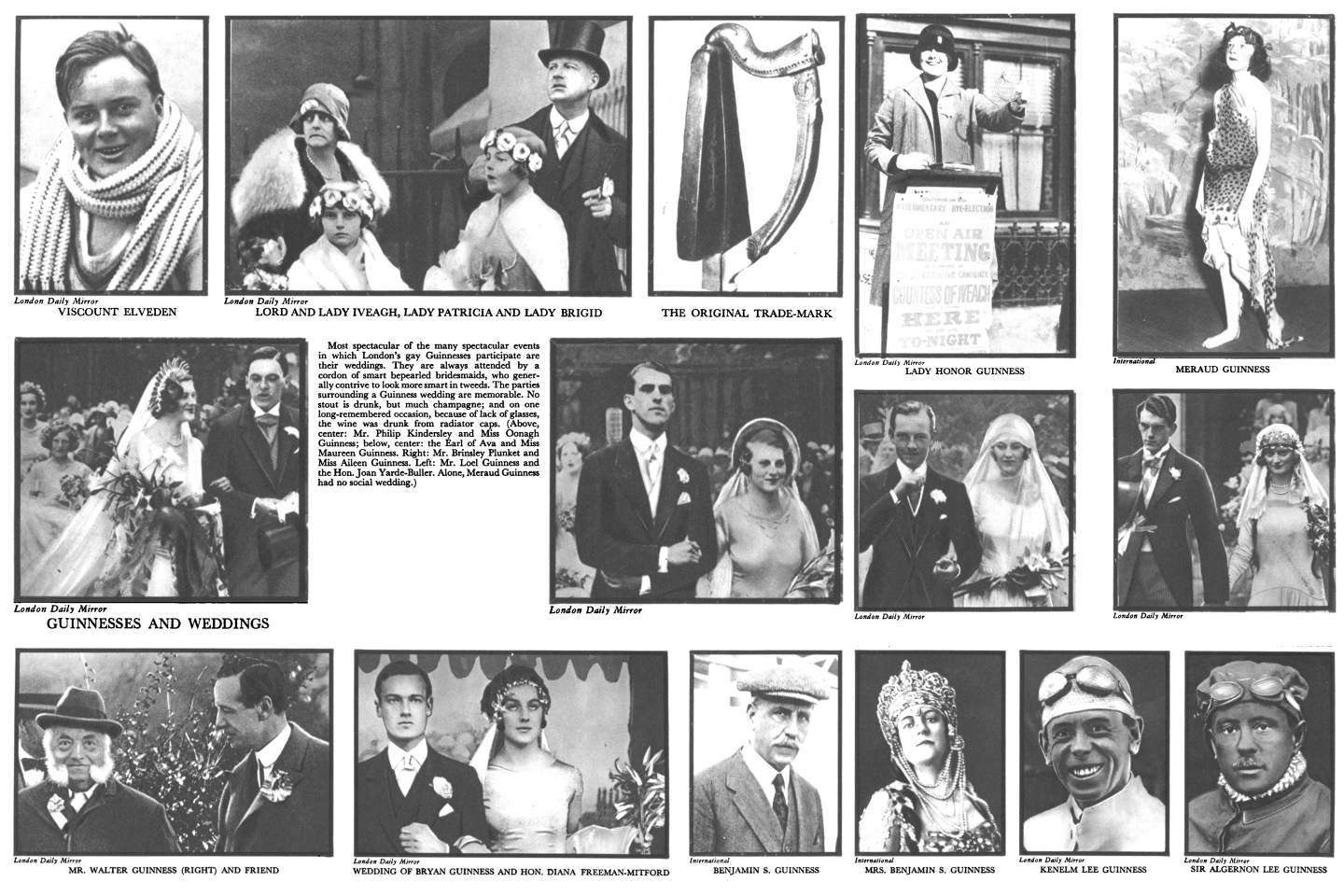 IT IS a paradox to delight a Chesterton that the biggest British brewery isn’t in Britain and it doesn’t brew beer. The brewery of Arthur Guinness Son & Co., Ltd. is British-owned, and it is the largest brewery in the world, but it is situated in the Irish Free State and forms, with the tractor factor of Henry Ford, the chief export business of that troubled dominion.

Guinness brews stout or porter, a thick dark beverage containing about 8 per cent alcohol, called porter because of its extreme popularity with 18th century navvies, sweeps, draymen, and porters. Porter is a London drink and a paternal English Parliament fostered the spread of London porter in Ireland by placing a duty of 5s. 6d. per barrel on all porter brewed in Ireland. In 1777 while the rebellious American colonies were gradually convincing Britain that the indiscriminate taxation of her dependencies was not always wise, the Irish brewing taxes were reduced. A Mr. Arthur Guinness who brewed ale and table beer in an ancient brewery at St. James’s Gate, Dublin, undertook the manufacture of Irish porter.

The Guinnesses were Protestants and on excellent terms with the leisurely, moneyed English landlord rulers of Ireland. The rumble of discontent that was to burst so bloodily, so hopelessly in the Irish insurrection of 1793 was already stirring. No sooner did dark tankards of Guinness appear in Irish alehouses than Dublin wags labeled it “Guinness’s Black Protestant Porter.” Arthur Guinness spoilt the alliteration of this by brewing his porter stronger and calling it stout. To counteract the suggestion of black Protestantism and toadying to the English, he adopted for a label, later a registered trade-mark, that most sacred of Irish patriotic relics, the minstrel harp of Brian Boru, the harp that once through Tara’s halls the soul of music shed. There was still another reason why devout Dubliners accepted Guinness’s stout. The brewery was at St. James’s Gate, and in the ancient days when Irish priests were sent across the channel to convert the heathen Britons, devout Celts gathered in that neighborhood to drink and bathe in the miraculous waters of St. James’s Holy Well. Be assured that no upright Church of England Guinness has ever attributed miraculous powers to Guinness’s stout. Even in Arthur Guinness’s time the Holy Well of St. James’s was too polluted to use for anything more than cooling pipes. Just the same, the legend helped sell many a barrel.

Guinness today is the world’s largest brewer of stout. They brew over 115,000,000 gallons a year and print enough stout labels to put a girdle round the earth.

Even more important than the Guinness brewery are the Guinnesses. After the War, the old leaders of smart London society were dead or nerve-shattered or financially ruined. There remained the Guinnesses. They were talented. Their sons were handsome and their daughters lovely, the titles of the heads of the family were granted by Queen Victoria and had none of the uncomfortable newness of a Leverhulme or a Beaverbrook, and best of all they were extremely rich—even by American standards. London society even up to Buckingham Palace had a rush of Guinness to the head—today a London affair without at least a brace of Guinnesses is unthinkable.

They are a legion in themselves, and there is the word of the editor of Debrett’s Peerage that Guinness is the most complicated family in the book. For the purpose of this article they may be divided into Old Guinnesses and Young Guinnesses. Of the Old Guinnesses, three are important. Lord Iveagh, Lieutenant Colonel Rt. Hon. Walter Edward G inness, and Hon. Arthur Ernest Guinness, all brothers.

Rupert Edward Cecil Lee, Earl of Iveagh (pronounced Iver) is head of the family and chairman of the brewery board. He is extremely abstemious and has very little interest in brewing; agriculture is his real hobby and he has a model farm at Woking in Surrey as a training ground for young men anxious to emigrate to Canadian farms. While at Cambridge, Lord Iveagh was a notable oarsman. He won the Diamond Sculls at Henley in a famous race with Blackstaffe, the champion that is still discussed by old Light Blues. One of his sculls splintered against a hidden rock 200 yards from the finish. In politics he was a member of the House for seventeen years. On entering the House of Lords in 1927, his Southend seat was contested and won by his wife who, with her money, her interest in farming, her inheritance of her husband’s political career, is a British parallel to Ruth Hanna McCormick. They are seldom seen at parties of the Young Guinnesses.

“Rupert,” explained the late Lord Ardilaun’s secretary, “was always the soul of stability.”

Ask a political reporter about Colonel Walter Guinness, and he will answer immediately, “The man who stabilized the British egg.” When he was Minister of Agriculture in the last Conservative cabinet, British eggs were sorted, graded, candled, etc., for the first time. Colonel Walter is the most politically active of the elder Guinnesses and probably the least pompous. He displays a certain sly humor in the House, and though personally a teetotaler and a non-smoker he has broken more than one lance with Lady Nancy Astor, famed prohibitionist.

Though not a man at St. James’s Gate will admit it, the real head of the brewery is not Lord Iveagh, but his brother Arthur. Guinness never advertised until two years ago. Astute Arthur Guinness realized that with modern standards of living and the world-wide spread of luxuries, there were fewer and fewer people who really liked the taste of such a stalwart plebeian brew as stout. On the other hand, it contains 8 per cent of alcohol and it is nourishing. A vigorous advertising campaign was started, concentrating on the medical properties of stout. “Guinness is Good for You!” “Guinness for Strength!” It is a fact that two large glasses of Guinness are apt to put anyone to sleep. Most company directors would gloss over such a fact, but not honest Arthur Guinness. He admitted it. Pamphlets were issued on “Guinness for Insomnia.” “The wearing and devitalizing results of want of sleep are well-known,” they read. “The soporific effects of Extra Stout are sometimes remarkable and doctors have declared it is preferable to opium …”

The Old Guinnesses don’t drink anything, and the Young Guinnesses, their nephews, nieces, and cousins obviously don’t drink stout. There is nothing soporific about them. They and their friends form a noisy inner world known to society reporters as the Bright Young People. They are notable for two things, magnificent weddings and uproarious parties.

Guinness weddings are almost as newsworthy as Lipton yacht races. For the past three years, they have left a trail of pearlstrung bridesmaid rotogravure pictures through the entire illustrated press.

Now for the parties. The Guinnesses invented the famous treasure hunts in which Bright Young People in roadsters would meet at one of the stately Guinness houses, be handed a series of cabalistic clues, and dash off all over London in search of the treasure. So successful were the treasure hunts that they spread to America and tied up the traffic of New York, Boston, and Philadelphia for most of one season. The Guinnesses gave a bathing party at St. George’s Baths at which the helmets of the policemen who came in to keep order were thrown into the pool. This was followed by a Russian Party and a Greek Party, which attracted considerable unfavorable comment from the more conservative family journals, and finally a Baby Party at which the Bright Young People, actors, playwrights, and a few belted earls in rompers raced round Grosvenor Square in perambulators to the popping of tabloid photographers’ flashlights.

It was the Guinnesses who started the fashion of midnight bathing, motoring twenty-one miles to Windsor for a moonlight swim in Cuckoo Weir, the swimming hole of Eton College.

It was Kenelm Lee Guinness who drove a steam roller over a monumental pile of tin cans to hear what a loud noise really sounded like.

It was Bryan Guinness and his wife (the Hon. Diana Freeman-Mitford) who gave an exhibition of fake modern pictures and fooled even the serious-minded Mr. Lytton Strachey into buying one for $75.

Almost the latest occasion for Brightness was the wedding of Miss Maureen Guinness to the Earl of Ava. After the reception, squadrons of Bright Young People raced down to Croydon to see “Maggie” off and drink a last toast to the happy couple. There was plenty of champagne but no glasses at the field, so the toast was drunk from the empty radiator caps of the cars. And the coming-out party last year of Lady Honor Guinness (she who at eighteen campaigned for the flapper vote) was acknowledged London’s smartest entertainment.

Despite this slightly Hollywood atmosphere, all of the Guinnesses have married conventionally with the exception of Meraud, daughter of Mr. and Mrs. Benjamin Guinness. The Benjamin Guinnesses, by the way, are good friends and distant cousins of all the other Guinnesses, but they have no connection with the brewery. Meraud is a talented painter, she dresses oddly and talks loudly, exhibits at the Salon des Independents in Paris, and eloped a couple of years ago with a Señor Alvaro Guevera to the south of France.

Naturally, such a spectacular group could not long exist without being fictionized. This was done last winter by their friend, Evelyn Waugh, in his novel, Vile Bodies. Evelyn Waugh mentioned no names, but the Guinness type of antics and the Guinness attitude were as easily recognizable as was Rosa Lewis in the person of “Lottie Crump.” London society is happy led by Guinnesses. For the serious, there is Lord Iveagh (who when he was a child spelled “wife,” “yph”) and the Hon. Walter, to whose home in Grosvenor Square the King and Queen yearly come to dine. There is Mrs. Richard Guinness, whose pearl earrings are the finest in England. And there are the unbelievable gay ones with the unbelievable names: Aileen and Maureen and Oonagh, the daughters of Arthur; Meraud, the artist and daughter of Benjamin, her brother Loel (married to Hon. Joan Yarde-Buller), and her sister, Tanis, engaged to the Hon. Drogo Montagu. Richard Guinness has two step-daughters whose names, by comparison, are almost normal: Zita and Theresa. One calls Theresa “Baby.”

This article originally appeared in the December 1930 issue of Fortune.