Everyone is using Zoom, but is that what Zoom wants?

A quiet hit among business users when the pandemic struck, a young company struggles to serve consumers.
BYMichal Lev-Ram
April 17, 2020, 9:30 AM UTC 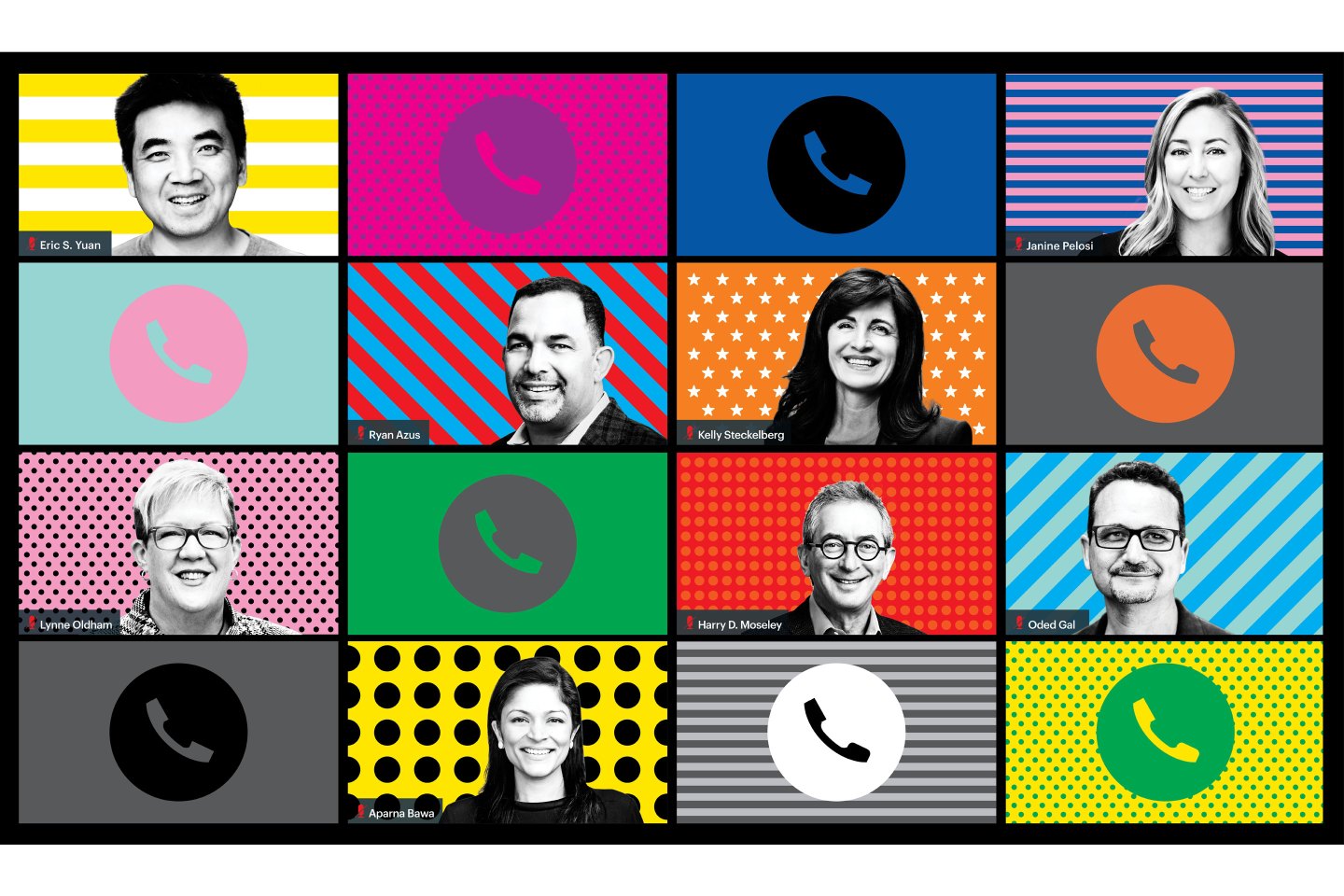 Most entrepreneurs dream of having an unexpected flood of new users. For Eric Yuan, the 50-year-old founder and CEO of Zoom, adding 90,000 schools—and having to educate them on how to use his product—has become a bit of a nightmare. “We thought their IT teams could help, but we were wrong,” he says in an early April interview over Zoom. “We are like the IT team for them.”

It’s hard to feel too sorry for him. After all, he is a multibillionaire several times over. He leads one of the few companies whose prospects have soared as a result of the pandemic. Still, Yuan looks drained, his face wan against the backdrop of a glimmering—and fake—image of the Golden Gate Bridge, a standard option in his product’s “choose virtual background” feature.

His frustration is understandable. A month has passed since Yuan ordered his 2,500-person company to work from home, preceding California’s statewide lockdown by 12 days. In the weeks that followed, as the COVID-19 outbreak spread around the world, the San Jose–based company’s popularity took off exponentially as well. To “Zoom” quickly became a verb, the new-normal way to convene for everyone from yoga instructors to Fortune 500 executives suddenly forced from their workplaces. Zoom’s users soared from 10 million a day in December to 200 million in March. Its stock price is up 80% on the year, giving the company a market value of $35 billion.

But the rapid growth has exposed challenges far greater than the CEO’s crammed calendar. As it turns out, the main reason Zoom was able to zoom past the competition, its ease of use, has proved to be a thorn in its side. Not requiring passwords as a default setting gave rise to yet another new phrase in the pandemic lexicon, Zoombombing, or the intrusion of uninvited and often offensive guests to private meetings. Zoom also has proved a target for hackers, forcing the company to patch software that could have allowed remote users to control the cameras of unwitting users, among other nefarious tricks.

The explosion of attention caught Zoom off guard. After all, for a decade it had been focusing on business users, not the masses. Yuan has embarked on an apology tour, penning a contrite blog post and granting numerous media interviews. “I’m ashamed,” he says of the security flubs. “I blame myself.” He’s adding more defensive features, such as mandatory password protection of meetings, while acknowledging that such moves will make Zoom less click-button simple to use. “For sure, it will have some impact,” says Yuan. “But we have to win back trust.”

Winning trust isn’t Zoom’s only hurdle. Counterintuitively, the surge in usage isn’t necessarily a boon to its business, because so many of its new users aren’t, and may never be, paying customers. That challenge, at least from an investment perspective, may be an even bigger concern than security slipups. “I don’t think it’s sustainable to give your product away for free for too long,” says Alex Zukin, an analyst with RBC Capital Markets.

In other words, Zoom may have become a beloved household name even as it faces unexpected scrutiny for its less-than-perfect security. But its success when the world returns to normal is anything but assured.

Zoom flew under the radar right through its successful initial public stock offering in April 2019. It raised $357 million at $36 per share, and the stock quickly charged over $100, making it a bright spot in Silicon Valley after the disappointing debuts of buzzier startups like Uber and Lyft. Its early users were typically universities and other smaller technology companies. And it wasn’t like videoconferencing was a particularly new idea. “For a long time, everyone thought that it was a crowded market, and that there’s nothing going on there,” says Dan Scheinman, a former head of corporate development at Cisco and Zoom’s first investor.

For Cisco, Zoom is in many ways the one that got away. In 2007 the networking equipment giant bought Webex, a business-focused videoconferencing company, where Yuan was the vice president of engineering. He stayed on at Cisco for four years and then left to build his own version of Webex, taking 40 engineers along with him. “To be able to scale video is a hard problem to solve,” says Oded Gal, Zoom’s chief product officer and one of the Webex refugees. “The engineers who followed Eric had built the best screen-sharing technology out there, and there are not a lot of people who can do that in the world.”

The entrepreneurs didn’t simply try to re-create Webex. Yuan believed a more modern take on the industrial-grade product the Cisco unit offered should be easily accessible from phones and laptops while on the go. It also needed to work on spotty Internet connections and cellular networks and to do it better than existing videoconferencing systems, which sucked up huge bandwidth and still didn’t do a particularly good job of replicating a phone call. “Eric spent two years building Zoom’s core architecture,” says Santi Subotovsky, a general partner with Emergence Capital, another early investor in Zoom. “He did the hard work, and he didn’t take any shortcuts.”

Yuan’s goal was to make Zoom scalable and reliable. He also wanted to make it much easier to use than existing video­conferencing software, which typically led users through a series of clicks (and downloads) before any video started streaming. Because there were plenty of simple alternatives in the marketplace, from Google’s Hangouts to Microsoft’s Skype to Apple’s FaceTime, Zoom would have to stand out to succeed. “We were in a market full of gorillas,” says Janine Pelosi, Zoom’s chief marketing officer and another former colleague of Yuan’s. (Half of Zoom’s 12-­member management team worked with him at Cisco.)

Zoom’s embrace of “freemium” pricing—free to most users, upsells for added features—made the company popular with business users. The free version the world has become familiar with allows calls of up to 40 minutes for as many as 100 people and unlimited one-on-one exchanges. Zoom’s paid accounts start at $15 a month per user, enabling longer-duration calls and various administrative controls. Versions targeting big and small businesses offer even more capacity and additional bells and whistles.

True to its business-focused roots, Zoom already was earning a modest profit by the time it went public. For the year ended Jan. 31, 2019, it made nearly $8 million on sales of $330 million. Sales nearly doubled to $623 million a year later, and profits nearly tripled to $22 million, handily beating Wall Street estimates. “They’ve been executing wonderfully,” says Zukin, the RBC analyst. “Even pre-COVID, the stock had been on a significant tear.”

Indeed, Zoom was producing some of the fastest revenue growth rates in the software industry well before the effects of the pandemic began to be felt in China, where Zoom had proved popular. The company removed time-limit restrictions for Chinese users as the country began locking down. When workers in the U.S. began to follow suit in March, Zoom transitioned in a span of weeks from Silicon Valley success story to global phenomenon. And that’s when things got out of control.

While Yuan is publicly apologizing and reevaluating Zoom’s features, his larger, deep-­pocketed competitors are seizing the moment. Webex, his former employer, is also seeing huge upticks in usage—more than tripling its volume of average meeting minutes per month in the U.S. in March. And it is actively marketing what it says is an emphasis on privacy and security to customers, both old and new. “That differentiation helps at this time,” says Sri Srinivasan, head of Cisco’s collaboration unit, which includes Webex. Microsoft Teams, a business-focused product that includes videoconferencing and complements the company’s consumer-oriented Skype service, also has been gaining. Microsoft says 500,000 organizations use Teams, which it bundles with subscriptions to its Office 365 productivity software.

Even smaller players, like Internet telephone provider RingCentral, are trying to make their move while Zoom is in the hot seat. In early April, RingCentral announced it was launching its own video product after seven years of relying on Zoom to provide “white label” videoconferencing tools to its customers. “We get to control our destiny,” says Vlad Shmunis, founder and CEO of RingCentral, referring to ending his company’s reliance on Zoom’s video tool.

That alone might not make a dent in Zoom’s current growth trajectory. The company’s chief financial officer, Kelly Steckelberg, says that revenue from customers like RingCentral represents less than 10% of Zoom’s overall sales. What’s more, it’s not clear whether the current scrutiny of Zoom’s security issues will end up eating away at its new growth at all. Consumers can be forgiving of security flaws in an overwhelmingly useful product. Just ask Facebook.

But there’s another question looming over Zoom’s newfound role as the public’s favorite videoconferencing tool: Just how many of its new users will become paying users? Unlike Slack, another collaboration-tool software maker, Zoom doesn’t break out the percentage of its account holders who pay. It also doesn’t say how successful it is in converting nonpaying users to paying subscribers. The company warned that usage growth would erode margins, but it hasn’t quantified the risk.

Investors, who have watched Zoom’s market value equal that of auto giant General Motors, are concerned. “We have reservations about Zoom’s long-term ability to monetize,” Morgan Stanley analyst Meta Marshall wrote in a report. Credit Suisse’s Brad Zelnick, who downgraded Zoom’s stock April 6 to “underperform,” was more direct. “We expect much of the recent surge will prove ephemeral, and/or comes from free users or education, which are difficult to monetize,” he told clients.

As for Zoom’s Yuan, he sounds as though he rues the day his company became a consumer hit at all. He’s focused right now on putting customers at ease, not wowing them. Already he has paused the development of all new features—that Snapchat-like makeup filter you’ve been pining for will simply have to wait—opting to devote his team’s time to fixing security loopholes. “We will review everything,” says the CEO. “Anything that might have negative impact to security and privacy, we will turn it off.”

In the process, Yuan needs to make sure he doesn’t turn off users who think his product has made getting through a global crisis just a little bit easier. After all, like Yuan, most of us plan to someday return to our ­office. When we do, he needs to make sure we still want to Zoom.

For many, Zoom seems to have appeared out of nowhere. In fact, it was a private startup for eight years as it became popular for its ease of use among business customers.

A version of this article appears in the May 2020 issue of Fortune with the headline “How Zoom Zoomed.”

—How Fortune 500 companies are stepping up during the pandemic
—When will stimulus checks be deposited or mailed? Ensure yours isn’t delayed
—Stocks have gained 25% since their March lows—but the math doesn’t add up
—Freelancers and independent contractors can now apply for SBA Paycheck Protection Program loans. Here’s what to know
—After coronavirus, expect to see smaller airlines
—PODCAST: COVID-19 might have upended the concept of the best companies of the year
—WATCH: The U.S. Postal Service is in deep financial trouble. Here’s why