The Vines membership club expands beyond Argentina, allowing members to blend their own Pinots, Brunellos, and beyond.
BYSara Lieberman
November 10, 2019, 2:00 PM UTC 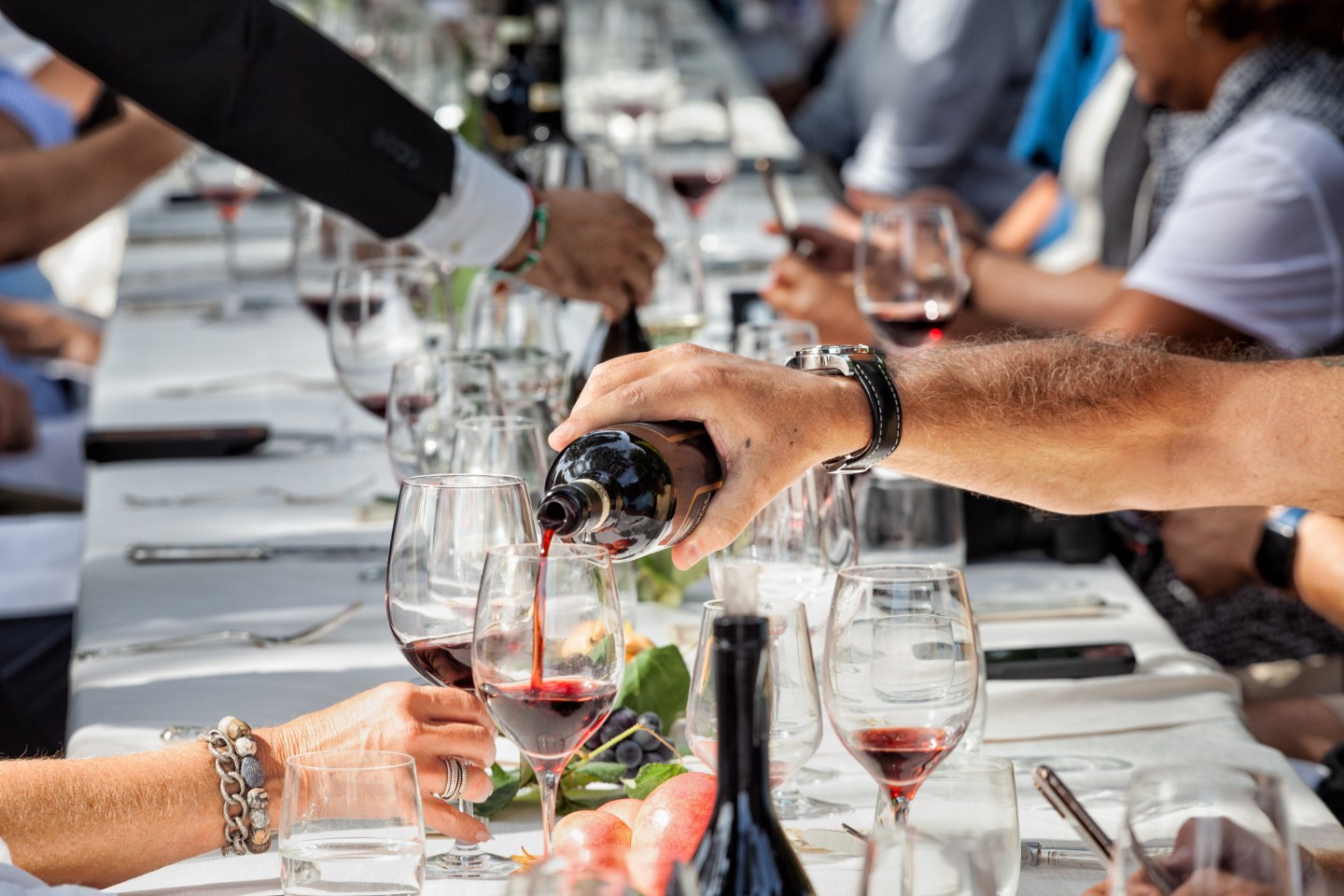 Wine is the focus at most activities and events during The Vines Global program—especially at the Sesti estate where wines are celestially-inspired.
Alfredo Falvo

On a sunny afternoon in Tuscany this past September, approximately 40 people sat along a narrow table under a leafy pergola, dripping with red grapes. On one end, friends, couples, family, and strangers chatted with the matriarch of this hillside estate, Sarah Sesti and her daughter Elisa. Way over on the other end sat a group of eight men, who occasionally burst into an Italian yodel—only taking breaks to sip a Sangiovese or tuck into a bowl of gnocchi.

Joined by the master of the house, Giuseppe Sesti—arguably a dead ringer for Pinocchio’s Geppetto with huge black frames, a full head of gray hair, and a matching ‘stache—this UNESCO-recognized singing group called Cardellini doesn’t regularly do house calls. But, then again, Giuseppe and Elisa Sesti, owners of this 254-acre property and 12th century castle, aren’t just any hosts and this wasn’t you ordinary midday meal under the Tuscan sun. While the likes of Judi Dench and Keith Richards (who are rumored to occasionally pop by for some R&R amongst the vines) weren’t in attendance, members of The Vines of Montalcino were. And for them, magic happens.

Members of the UNESCO-recognized singing group Cardellini, along with master of the estate Giuseppe Sesti, entertain guests during an al fresco lunch.
Alfredo Falvo

“The original draw is simply the wine,” says Tennessean Jacqueline Holdbrooks, whose husband Keith gifted her with a membership to the winemaking club for her 50th birthday in 2014. “The icing on the cake is that these experiences are something I likely wouldn’t have been able to conjure up myself. They happen because Michael knows people who know the best of the best, and they create an exceptional program.”

Michael Evans founded The Vines of Mendoza in Argentina 15 years ago, and it has become a travel destination in its own right, complete with a resort and restaurant where famed chef Francis Mallmann fires up gourmet cuisine. For the first time since launching, Evans and his team are expanding beyond South America and inviting members—old and new—to join him for a different kind of winemaking experience.

The Vines member Jacqueline Holdbrooks is hard at work blending her own personal Brunello (made from 100% Sangiovese grapes) from the 2016 harvest.
Alfredo Falvo

Whereas in Argentina, members actually own land and see the winemaking process from harvest to blending to bottling, now participating oenophiles will have the opportunity to pop into a different country each year to make their own wine—without the hangover that comes with land management.

“It’s not just about wine,” he says of The Vines Global. “It’s much broader than that. It’s traveling the world and making wine along the way. It’s special experiences like the one at Sesti. And it’s the connection that is made during these adventures, with yourself and others.”

The expansion began this fall in Italy’s famed Montalcino region where 18 “owners,” as they’re called, were welcomed into reputable estates such as the family-run Casanova di Neri, and given the rare opportunity to blend their own Super Tuscan (a mix of four indigenous grapes including Sangiovese) and Brunello (using 100% Sangiovese). In between tasting sessions, they went truffle hunting, napped poolside, and ate hours-long lunches like the aforementioned one cooked by Roberto Rossi, owner of the local Michelin-starred restaurant Il Silene.

Starting in 2020, they’ll rollout like-minded experiences in 12 other countries, beginning with Priorat, Spain, and slowly delving into other wine regions that are both well-known (Napa Valley, Calif. and Burgundy, France) and more obscure (Tbilisi, Georgia). The program will permit globetrotting wine lovers the opportunity to learn about a particular terroir and its grapes while also immersing themselves in the area culturally.

Wine is the focus at most activities and events during The Vines Global program—especially at the Sesti estate where wines are celestially-inspired.
Alfredo Falvo

“’Someone might say, ‘I’m not going to make wine in Israel every year, but I’d love to go there once and have a curated experience around food and wine,’” Evans says. “And they know that with The Vines, we won’t just give them the same old touristy B.S.”

Whether you’re a novice or well on your way to becoming the next Robert Mondavi, all are welcome. In fact, Evans says, the vast majority of members just love wine and want to learn more: “Only about 20% of our members are the stereotypical wine nut that reads Wine Spectator and has a cellar with 3,000 bottles and can tell you the best wines from different regions. Most start out as complete neophytes.”

The only other caveat is having a cool $150,000 for the initiation fee. After that, members only pay for the annual winemaking, which depending on where (and what) they decide to harvest, age, blend, and bottle can run anywhere between $10,000 to $50,000. But with it they get a barrel of wine (24 cases) and that aforementioned magic: bespoke, exclusive experiences like no other.

“People want all the bells and whistles,” Holdbrooks says. “[The Vines] takes nature, essentially, and creates that.”