The Swedish-born Verizon CEO shares some of his productivity and management tips—and talks 5G, wireless infrastructure, and the digital divide.
BYAaron Pressman
June 4, 2021, 9:00 AM UTC 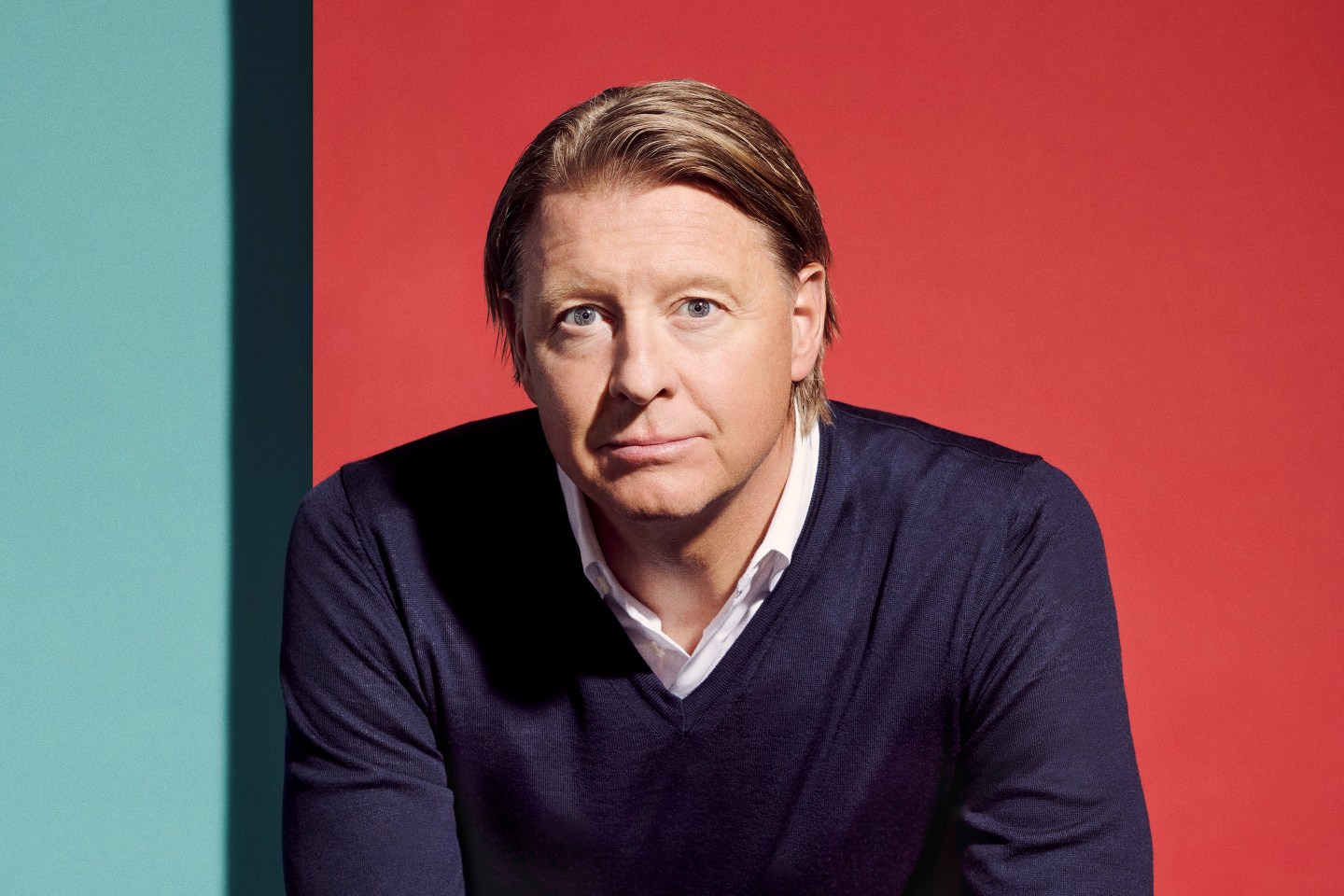 MAKING A CONNECTION: As CEO of Verizon (No. 20 on the Fortune 500), Vestberg passed on a dream career in sports to make a play to build America’s biggest 5G network.
Photograph by Mackenzie Stroh

For most of the cellular era, Verizon has held a comfortable perch as provider of the nation’s best voice and data network. But the race for 5G dominance could change everything, so CEO Hans Vestberg isn’t resting on his company’s laurels. The Swede—who is Verizon’s first CEO from outside the Bell System—sat down to talk about the future of wireless at the company’s Manhattan HQ.

This edited Q&A has been condensed for space and clarity.

When you left Ericsson¹ in 2016, was the plan to take another corner office job? And so soon?

Vestberg: My dream was to work with sports, so I became the chairman of the Swedish Olympic Committee. That was my focus. But the focus went away pretty fast, because I got called by Verizon. In the beginning, we discussed my becoming a board member; it turned out pretty quickly to be an offer to run technology and IT. I did that [starting in April 2017] and commuted almost for a year. I went back and forth to Sweden, maintaining the chairmanship for the Swedish Olympic Committee. After that, it turned out that, as I used to say, I was the last man standing in the corridor at Verizon.

So that was 2018, when you were named to succeed Lowell McAdam as CEO. At the time, you won the board over by writing a paper you called “Verizon 2.0.”

I always do a “boss contract.” Since the inception of my career, whatever boss I’ve had, I’ve always done a paper that says, “This is what I’m going to do,” just to know that we don’t have a mismatch. I did my first boss contract in 1993 in Chile, where I was head of an accounting department with three people [at Ericsson]. It was five bullet points for my manager. That’s when I learned that, wow, this is powerful.

So when I got the job as CTO, I wrote a white paper on where I thought the technology was going to go. And I did the same when I was a CEO candidate.

I divided everything into three pieces: What do we want to preserve, what are we going to strengthen, and what do we want to transform. I knew that within the company I was a fairly unknown Swede coming in, not coming from the roots of the company. So it is very important to get the team and the people with you. I also wanted to have a four-stakeholder strategy or vision for society, customers, employees, and shareholders.

What did your parents do when you were growing up?

My whole family are police officers. My father, my brother, my grandfather. And the only one that decided to stick out from it was my mother. She worked for the [Swedish] IRS. So you could say that my whole family are public servants. I’m the only one that has ever gone to university in my family. So yeah, it’s a different background—I was raised by a tough police officer.

[Editor’s note: This interview was conducted before AT&T announced it was spinning off WarnerMedia. We followed up with Vestberg to discuss the news; some of his comments are incorporated below.] Your rivals, AT&T and Comcast, made huge bets on acquiring entertainment companies. Now, AT&T seems to be backtracking on that strategy with its WarnerMedia news.² Meanwhile, your entertainment play has been built around partnerships, like giving some of your top wireless customers a free year of Disney+. Why go that route?

I have certain assets that the content companies don’t have, and there are certain assets you need to run the content companies that I don’t have. And when I did that first deal with Disney, they were going direct to the consumer. I said, “Okay, what’s your distribution? Well, we want to build it up. We have a great opportunity: I serve more consumers than anybody else in this market, and I have a network that can manage all the content that you have. So why don’t we go together?” And we made an exclusive for my customers. Whatever I bring in, I get the bounty. So suddenly, I get the payment for actually monetizing my network and my distribution.

We did that also with Discovery; we did it with Apple Music.³ I think all three were a huge success. These guys are far better than us on crafting the content, managing and making the right capital allocation. And I’m far better on distribution and on capital allocation for the network.

We remain focused on our strategy. Whether our competitors change their strategies along the way, we will continue to meet them head-on, as we’ve always done.

To be fair, Verizon hasn’t always taken the partnership approach. Starting in 2015, the company attempted to build its own Internet empire with AOL and Yahoo. On May 3, you announced that you’re selling a majority stake in those businesses to Apollo Global Management. Why sell?

Initially, the plan was that [AOL and Yahoo] should get access to all the wireless customer data [to use for targeting ads]. But that wouldn’t work for privacy reasons, so that plan was impossible to execute. We decided to write off the majority of the assets.⁴ Then we said, “Let’s rebuild this to be a great ad platform and see that we have great traffic.” It took us two and a half years to get there. And by one year ago, we had consolidated seven different ad-tech platforms, taking out probably $2 billion in costs. Then COVID came, which of course was a blow for advertising, but for the digital usage of Yahoo Sports, et cetera, it was an uptick. That’s when we started having inbounds from people who wanted to buy the business. And we said, “Okay, let’s find somebody that can take this to the next level and invest even more in it.”

Verizon has put a huge focus on 5G, but is anything really happening with the technology for consumers? Where is 5G right now compared with where you want it to be?

What people don’t realize is that we got our first 5G iPhone just five months ago. So I understand that people say, “Wow, nothing’s happening.” But the ecosystem is there now, from the network, to the chipsets, to the phones coming out. We have 120 million Verizon customers and they have 10 million 5G phones. So you can understand that we are just at the beginning⁵. But now we see the uptake. When people are coming into the store, they buy 5G phones now. The ecosystem is happening.

The pandemic underlined the fact that not everyone has adequate Internet connectivity. Some people have no access; for some it’s too much money. Now President Biden is proposing a $100 billion broadband plan⁶  Do you support it?

In COVID, we saw vulnerabilities in our society. It doesn’t matter whether you’re in the U.S. or in Europe, or of course we already saw it in Africa and Asia. Now you can see that in two ways: a big problem or the greatest opportunity to scale—getting people an equal chance, regardless of where they live and regardless of where they’re born. That’s where I start.

We work a lot on the digital divide. I personally do it on a global basis, and I’ve done it for 15 years.⁷ At Verizon, we will work first building out networks in the rural areas. We have by far the broadest network in the industry. We also have low-cost plans for low-income families; we have Fios for 20 bucks. So we do a lot on accessibility and affordability.

Now the industry is expanding more and more home broadband with wireless and some fiber as well. So we’re coming farther out. And we will do that with private money. On affordability, I think most important is a long-term federal subsidy for low-income families, so they can procure the broadband they need.

You have one of the largest workforces in the country. How did you work during the pandemic?

I heard that you very carefully track how you spend your own time as CEO. What system do you use, and why do you do it?

In 2009, at Ericsson, we decided there’s six things you need to do as a CEO. So I said, “Let’s do a forecast of what percentage of time I should be doing each of them.” Since then, I’ve measured every hour I work. There are three external and three internal things. The external ones are being in big scenes, meeting shareholders, meeting customers. Whenever it’s something where you say, “I am the only one at Verizon who can do it.” Going onstage with [Apple CEO] Tim Cook [to announce the first 5G iPhone], nobody else could do that. Internally, the three areas are about talent, strategy, and governance.

And I measure them in order to see that I actually spend the time on the most important things. Because it’s very easy in a company like this, to get bogged down on one big issue. But you know, there should be other people solving it, and you should actually attend to things that they cannot do. So that’s how I’ve defined my work—and still do today.

(2) Riding the M&A merry-go-round:
Comcast paid $30 to acquire NBCUniversal from GE in 2011. AT&T acquired Time Warner for $109 billion including debt in 2018. On May 17 it said it plans to spin off what’s left of the company, now called WarnerMedia.

(3) One-stop streaming:
Verizon customers on more expensive wireless plans can get from six to 12 months or more of free service from Disney+, Hulu, ESPN+, Apple Music and Discovery+.

(4) Log on, write off:
Verizon’s plans to use customer data to improve ad targeting on AOL and Yahoo floundered after leadership decided to give users the choice to share their info: Most opted out. In December 2018, Verizon wrote off $4.6 billion of the $9 billion it paid for the two Internet properties.

(6) Online infrastructure:
Part of Biden’s $2.3 trillion infrastructure proposal, the broadband plan may include funding for government and nonprofits to build their own networks, which has not been popular with the industry.

(7) Global connections:
Vestberg was a founding member and is a current commissioner of the Broadband Commission for Sustainable Development, a joint effort by the International Telecommunication Union and the United Nations to help spread Internet service to unconnected regions of the world.

This article appears in the June/July 2021 issue of Fortune with the headline, “The Conversation: Hans Vestberg.”