From a female butcher on an outlying island to a Filipino couple doing tasting menus that both feed and educate diners.
BYNaomi Tomky
September 8, 2019, 11:00 AM UTC 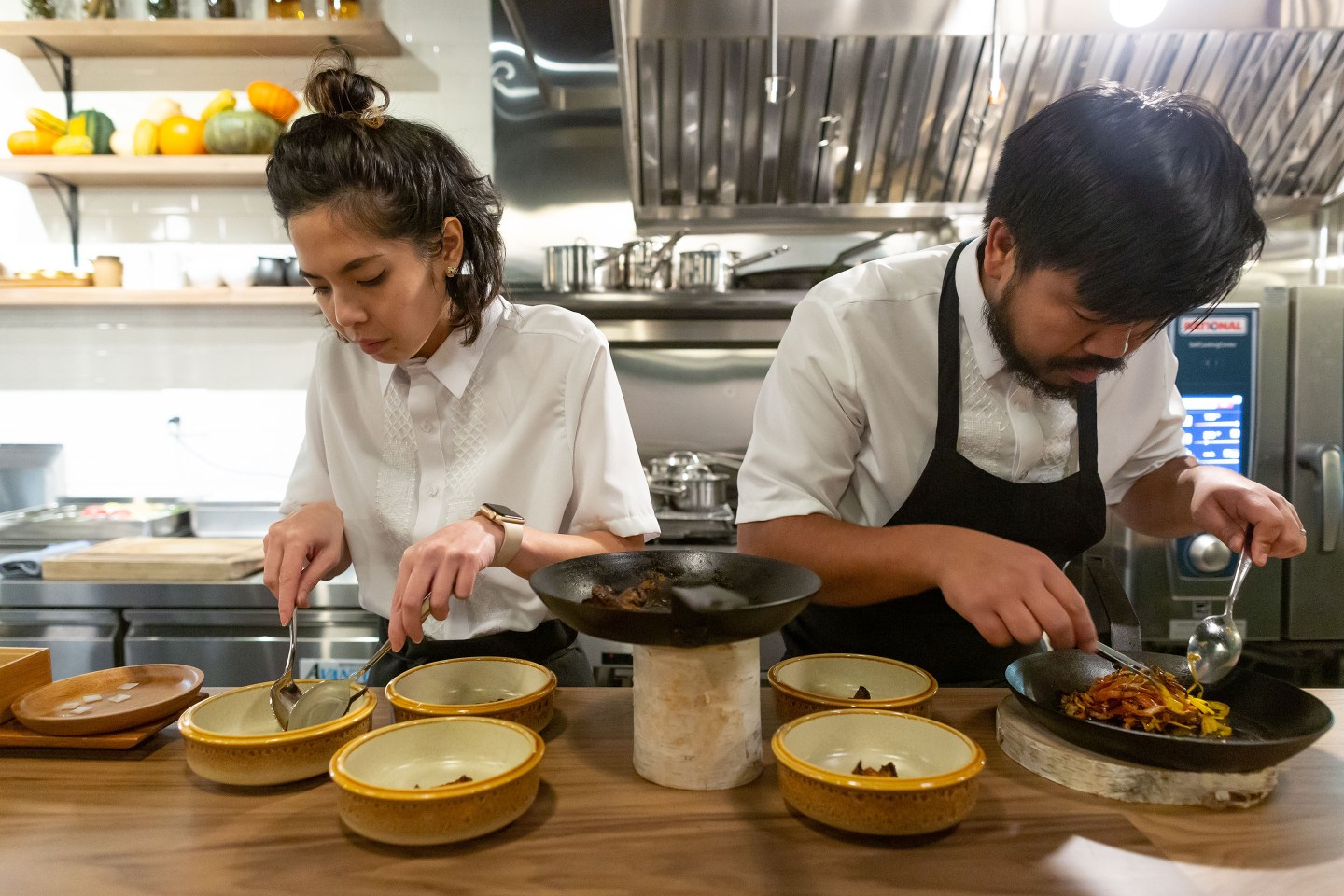 Restaurants often follow a proven formula, serving the same kinds of food in the same styles as those who went before them; innovation is a risk in an industry that’s already a notoriously unstable one.

But recently some of Seattle’s openings come from creative, devoted, and experienced chefs who have seen the ins and outs of the old and decided to buck tradition and do things the way they want to, the way they feel will best display their culinary talents.

For Lauren Garaventa, a former vegetarian and current butcher, that meant placing her butcher shop in the context of a restaurant: the Ruby Brink, which opened on Vashon Island in May. The menu balances pickles and pâté, sausages and shiitakes; it is a butcher shop and restaurant that greets vegans as equals and treats beans with the same care as beef.

The restaurant stems from Garaventa’s long-running pop-up, Meat & Noodle, and the dish of the same name (which always runs alongside a “hold the meat” version) remains a signature, arrayed with colorful local produce. But here, the kitchen is entrusted to her longtime collaborator, chef Rustle Biehn, and Garaventa can step behind the glassed-in corner that is now her whole-animal, ethically focused butcher shop. The result of the collaboration and how the two pieces of the business work together speak loudly and clearly about how diners can think about meat in sustainable, ethical ways.

Back on the mainland, Archipelago owners Aaron Verzosa and Amber Manuguid articulate their message in a far more direct fashion: Their nine-course tasting menu functions as an introductory course not only to Filipino food but to the history of the Filipino community in the Northwest. The pair met in college where both took classes in Filipino Studies, with Manuguid eventually majoring in fine arts and moving on to a career in experience design. Verzosa went into cooking, working at Seattle’s Harvest Vine and the Modernist Cuisine R&D lab.

Their restaurant, which has only eight seats and is ticketed (pay ahead, reservations only), is the culmination of their combined experiences. Verzosa prepares a series of Filipino-inspired dishes made with Pacific Northwest ingredients, like wheat and egg miki (noodles) served with local pork longanisa and black garlic. At the same time, the pair give what, at first glance, appear to be descriptions of the food, but are actually stories that walk diners through an interactive lesson about how Filipino immigrants came to the region and have thrived here ever since.

At Outlier, a restaurant inside the Hotel Monaco, another Filipino-American chef, Anthony Sinsay, weaves his heritage into hometown ingredients: To the restaurant’s main menu, for instance, he’s added a pork adobo pizza.

But Sinsay takes an even more personal approach to the dishes served at Outlier’s tiny noodle bar. With only two chef’s-counter seats offered twice each weekday for lunch, Sinsay prepares a no-menu meal of his own Filipino favorites, like lumpia and calamansi juice, and, of course, that day’s noodles. While it’s not widely advertised, guests can book the meal by clicking the noodle icon on the restaurant’s menu page. (A word of warning: With only 40 seats available each week, Outlier tables are booked at least weeks in advance.)

Addo 206’s jibarito, a sandwich of pork on a fried plantain bun.
Courtesy of Delaney Brown

Meanwhile chef Eric Rivera continues his journey marrying his own Puerto Rican background with the Northwest in his second space. At Addo 206—inside the Batch 206 Distillery (guests must be 21 or older)—Rivera offers a menu of highlights from two of his long-running pop-ups: Dishes include the Richard Burger, a play on Seattle’s own classic Dick’s Drive-In burger, and the jibarito, a pork sandwich built on two planks of fried plantain.

On top of that, social media followers can tune in to learn about occasional “taco tiempo” five-course taco meals for $25; “three-dog nights,” featuring Chicago dogs, Seattle dogs, and the special Addo dog; and street-food nights featuring a specific destination, such as New York, Brazil, or Japan. Rivera, whose work experience includes the famed Alinea in Chicago, is never one to sit still. His hallmark, more than anything, is that he’s always imagining how a meal or an idea can be bigger or better—which is, as these four new spots demonstrate, totally on trend.

—Vancouver is a haven for cheap but delicious tasting menus
—Vietnamese egg coffee is taking North America by storm—but what is it?
—Why Charleston’s food scene is stronger than ever right now
—Foraging for high-end meals on Dominica, the Caribbean’s best-kept secret
—Listen to our new audio briefing, Fortune 500 Daily
Follow Fortune on Flipboard to stay up-to-date on the latest news and analysis